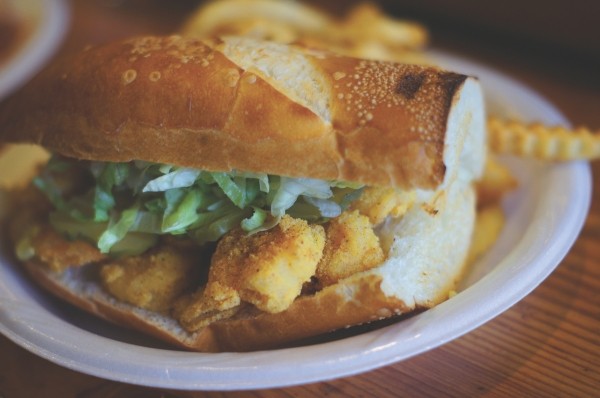 I’m known to be willing to travel far and wide for a good meal, but—with the exception of its Annual Salmon Supper—Payson hasn’t really been on my culinary radar. Then, on a recent road trip to Boulder Mountain Lodge and Hell’s Backbone Grill, the missus and I stopped to check out Boudreaux’s Bistro.

I’m not overlooking The Bayou—which has good gumbo, respectable po’boys and other Louisiana-style eats on its wide-ranging menu—but there aren’t really any restaurants, to my knowledge, currently operating in Utah that are dedicated solely to Cajun-Creole cuisine. So, I thought I’d better give Boudreaux’s a try. I’m glad I did.

I’m not sure why Cajun-Creole fare hasn’t gained much of a stronghold in Utah, where citizens seem to like large portions of rib-sticking comfort food. I still, after all these years, mourn the loss of the Cafe Creole in the now-defunct ZCMI Food Court, along with the passing of the Crocodile Lounge, Cajun Skillet, Crescent City Beignets and Spoony & Nata’s Down Home Cafe. The track record for Cajun-Creole eateries here is not a good one.

But Boudreaux’s Bistro—with a menu entirely composed of Cajun-Creole cuisine—has been going strong since owners Chris and Tanya Sorensen opened the restaurant two years ago. During a recent lunch, there was an eclectic mix of customers: a couple of ranchers, a trio of suit-attired businessmen, two college-age kids and a smattering of folks grabbing some grub on a break from a movie being filmed on Payson’s Main Street.

Stroll into Boudreaux’s Bistro and you’ll find a comfy area in the front with some lounge chairs, magazines and Louisiana knick-knacks—a cozy place to hang out and wait for a table if none are available. The restaurant is long and rectangular, with tables and booths that sit opposite the open kitchen, where you’ll see Chris Sorensen cooking, while Tanya handles the cash register and helps deliver food. Customers place their orders at the counter, and the food is cooked from scratch and delivered to your table piping hot. There’s nothing fancy here: Styrofoam plates, plastic bowls and cutlery are the order of the day, and there’s no alcohol. But, who cares?

The prices are so jaw-droppingly low that you’ll wonder how the Sorensens manage to turn a profit. A good way to sample a range of Boudreaux’s favorite dishes is with the Pick 3 plate. For a mere $8.25, you get a serving of three items—along with French bread—from a selection that includes shrimp or chicken Creole; crawfish, shrimp or chicken étouffeé; jambalaya; or red beans with smoked sausage. There’s also a Pick 1 plate for $6.25 and Pick 2 for $7.25. The shrimp Creole—tender shrimp in a tomato-based sauce with peppers and onions—was excellent, as was the chicken and andouille sausage jambalaya. We found the crawfish étouffeé to be a bit bland, but it was easy enough to kick up a notch or two with some Louisiana hot sauce.

I tried to chat with Chris Sorensen a bit as he was frying up some catfish ($9.95 with hushpuppies), but got the feeling I was bugging him. I’m sure I wasn’t the first customer to ask, “So, how did you wind up in Payson?” Sorensen is originally from Louisiana and says, “I got married, had kids, and the rest is history...” At any rate, they’re a friendly couple and nice to chat with—when they aren’t in the midst of a lunch rush.

Meanwhile, I was forced to make some difficult choices: an alligator sausage po’boy ($8.75) or a smoked andouille-style po’boy ($7.75)? Blackened chicken pasta ($8.75) or creamy Creole pasta ($8.75)? Gumbo or Cajun chili ($4.75)? And then there are the fried specialties, like the fried shrimp basket ($7.95), fried catfish ($9.95) and fried alligator basket ($9.95), not to mention Cajun burgers, red beans and sausage, and sides like hushpuppies and Cajun fries. I felt like I often do when I’m in New Orleans: too much food and too little time.

Well, to help narrow down the choices if you should find yourself in Payson, don’t miss out on the great gumbo ($3.75/cup or $4.75/bowl). Boudreaux's serves up a rich, hearty, medium-brown gumbo of chicken and sausage atop traditional white rice. It may be served in a Styrofoam cup or bowl, but it’s a thing of beauty.

The po’boy sandwiches, too, are excellent. Sorensen said he gets his bread from a local source, and it’s as close to the po’boy bread I’ve had in New Orleans that I’ve found here in Utah. He toasts the exterior slightly to give the bread a little crunch. I opted for the fried shrimp po’boy ($6.75), which was crispy, battered & deep-fried medium shrimp dressed with lettuce, tomato, dill pickles slices and mayo, with a choice of potato chips or French fries alongside. I’ll tell you what: the gumbo and shrimp po’boy alone were good enough to entice me back to Payson, but the side of homemade hushpuppies ($2.99) really sealed the deal.

If you find yourself traveling to visit family in Provo, Cedar City, St. George or other southward destinations this holiday season, be sure to schedule a detour through Payson to eat at Boudreaux’s Bistro.