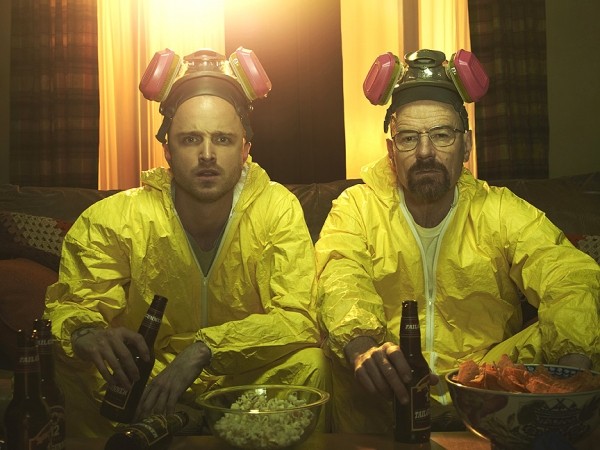 Season Premiere: Yes, the new season of Breaking Bad picks up right where the explosive (heh) Season 4 finale left off—after an ominous, timeline-indeterminate opening sequence, that is. After their less-than-positive experience with corporate drug trade, Walt (Bryan Cranston) and Jesse (Aaron Paul) are going back to cooking meth independently because, as Walt matter-of-factly intones, “There’s a market to be filled … and currently, no one to fill it.” Thing is, his DEA agent brother-in-law Hank (Dean Norris) is still sorting out the messy Gus Fring case, and Team Heisenberg have left behind more clues and loose ends than they previously realized—so many, they have to lure ex-Fring henchman Mike (Jonathan Banks) out of recuperation, and he’s not happy about it. Here’s something for you to be happy about, however: True TV, City Weekly and Red Rock Brewing are presenting Season 5 of Breaking Bad on the big screen, free every Sunday at Brewvies Cinema Pub (677 S. 200 West, 21+) at 8 p.m.

Series Debut: For some reason, AMC insists on churning out cheapo reality shows to pair with its critical hits these days: The Walking Dead has Talking Dead (occasionally entertaining zombie chat), Mad Men has The Pitch (unwatchable, but at least on ad-men topic), and now Breaking Bad has Small Town Security. Not that AMC should have bought a reality series about meth manufacturers—if it could be done, TLC would already be into Season 3 of Crank Boss—but how does a show about a family-security company in Nowhere, Georgia, relate to Albuquerque meth drama? Small Town Security is just more ain’t-hillbillies-cute? reality exploitation that belongs on A&E between Duck Dynasty and Inbred & Breakfast. Quit cheapening your brand, AMC.

Season Premiere: Last season, The Only TV Column That Matters™ whined a little about the week-to-week similarity of Leverage episodes: Timothy Hutton and his grifter gang (Gina Bellman, Christian Kane, Beth Riesgraf and Aldis Hodge) listen to a sob story from a downtrodden everyman, then set up an elaborate con on the moneybags downtrodder, don some funny costumes and accents, avert a last-minute plan snafu, restore whatever was lost to the victim (usually with interest), beers and shots and quips at the bar, fade to credits. But then, realization: This column is pretty much the same every week, and it’s goddamned brilliant—ergo, so is Leverage. In the Season 5 premiere, the team tricks a bastard shipping CEO (Cary Elwes) into “buying” Howard Hughes’ behemoth Spruce Goose aircraft, and they also relocate operations to Portland (where the series is filmed, anyway). Is it too early to begin lobbying for an epic Leverage/Grimm/Portlandia crossover event?

Political Animals
Sunday, July 15 (USA)
Miniseries Debut: Not exactly USA’s usual light & fluffy brand of dramedy, the six-part Political Animals centers on former First Lady-turned-Secretary of State Elaine Barrish (Sigourney Weaver) and her beyond-dysfunctional family (including a philandering-and-still-popular ex-husband/ex-president, problem twin teens and a foul-mouthed mother played by Ellen Burstyn), the current president (Adrian Pasdar) who uses her for his own nefarious means, and a D.C. journalist (Carla Gugino) hell-bent on taking them all down. Part The Clintons, part Shameless Goes to Washington, all too heavy-handed to take seriously and too humorless to laugh at. And—this may be nitpicking—no actual animals.

Black Dynamite
Sunday, July 15 (Adult Swim)
Series Debut: Not quite as effective as the 2009 live-action movie; more like The Boondocks gone Blaxploitation. But! This version has J.B. Smoove (Curb Your Enthusiasm). Everything’s better with Smoove—it’s trademarked.