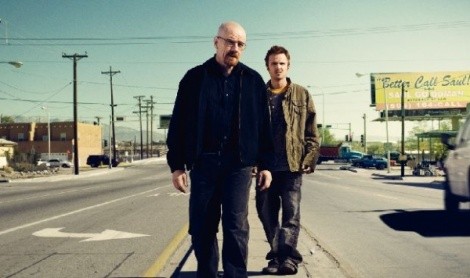 Season Premiere: For two seasons, Breaking Bad has been more about the fallout from selling meth than actually moving the product—the series doesn’t glamorize drug dealers, or anything else; it makes Weeds look like a sitcom. Sure, Walt (Bryan Cranston) and Jesse (Aaron Paul) made some serious cash over a couple of episodes last season, but everything went to hell quickly: Walt’s wife Skyler (Anna Gunn) finally figured out he was lying to her (but not about what), Jesse’s girlfriend died from an overdose (while Walt watched and made no attempt to save her), and two planes collided over Albuquerque, raining debris and body parts over the city (indirectly caused by Walt and Jesse’s previous actions).

Nothing’s magically healed by the opening of Season 3, which finds Jesse in rehab and zombie-fied by guilt, Skyler finally learning that her chemistry-teacher husband’s a drug dealer (“manufacturer, per se,” the ever-analytical Walt corrects), and Walt giving the worst (and, darkly funniest) pep talk in the history of high-school grief assemblies. Oh, and a pair of ominous hitmen are coming to take out “Heisenberg,” Walt’s drug-kingpin cover identity. Breaking Bad is still a bleak ride with only the occasional shot of comic relief—yes, shady lawyer Saul Goodman (Bob Odenkirk) is back—but there’s no better writing on television right now, including a certain other AMC series about chain-smoking advertising men.

Season Premieres: Two more high-quality series, though somewhat over shadowed by flashier Showtime successes like Dexter, Californication and The Tudors—all male-centric shows. But, unlike Brit import Secret Diary of a Call Girl, Nurse Jackie and United States of Tara are less about being “women” than just “supremely fucked up.” New York City nurse Jackie Peyton (Edie Falco) is at least partially cleaning up her act at the onset of Season 2, cutting off her affair with the All Saints Hospital pharmacist (mostly because he was fired and can’t supply her with painkillers anymore) and reconnecting with her family—too bad the aforementioned pharmacist isn’t going away that easily.

On United States of Tara, Tara Gregson (Toni Collette) has been on her meds and free of “dissociative identities” T, Alice and Buck for months, and all is swell in Overland Park, Kan.—of course, that won’t last. And, just in case anyone thought Collette wasn’t earning her Emmys and Golden Globes playing four different characters, a fifth (or sixth, if Season 1’s animalistic “Gimme” returns) is coming this season. No, it’s not a morally ambiguous New Yawk City nurse—but how meta would that be?

Dancing With the Stars
Monday, March 22 (ABC)
Season Premiere: I know who Shannen Doherty, Pamela Anderson, Kate Gosselin, Nicole Scherzinger, Erin Andrews and even Niecy Nash are, but the male “stars”? Evan Lysacek, Aiden Turner, Jake Pavelka and Chad Ochocinco? Who are these clowns? And Buzz Aldrin—not dead? If I actually cared about Dancing With the Stars, I’d be feeling shortchanged. But, then again, I’d also be fascinated with shiny objects and blinking lights, as well as unable to actually read any of that stuff above, so it evens out.

V
Tuesday, March 23 (ABC)
Return: It hasn’t been on since November—remember V? ABC’s remake of the ’80s NBC miniseries about reptilian aliens who inhabit Earth under the pretense of embracing and enhancing mankind, but really just want to enslave us? The Only TV Column That Matters™ says: If mankind is so enthralled with C-list celebrities attempting a box-step, it deserves to be dominated by lizard people.