Ozark underwhelms; American Horror Story and You're the Worst return. 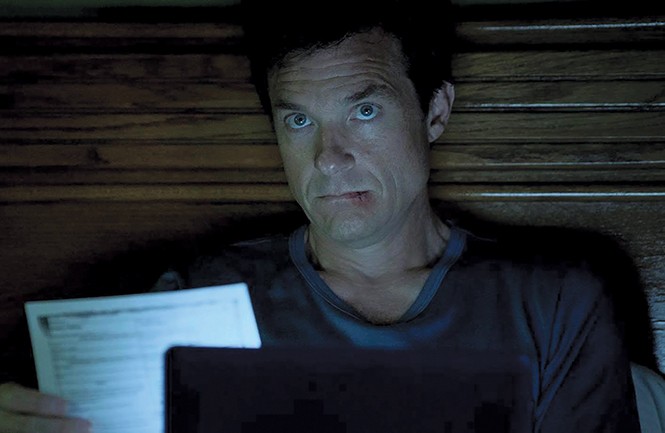 Too many people told me that I "just have to" watch Ozark (streaming, Netflix), another summer series that got by me because there are Too Many Shows. Ozark must be good, since Netflix has renewed it for a second season, right? I blame Netflix's idiotic, downright Trumpian "Very Good/Very Bad" ratings system. The Jason Bateman crime drama (he also directed half of Ozark's episodes) mostly lives up to its Southern-Fried Breaking Bad hype, leaning more heavily on action than creating any characters to give a shit about. This makes for a quick binge—smart, because the plot (a nonsensical money-laundering operation in a Missouri tourist trap) shouldn't be overthought. "Very Meh."

Meanwhile, The Guest Book (Thursdays, TBS) is halfway through its debut season and you've probably never even heard of it. Creator/producer Greg Garcia's (My Name is Earl) sorta-anthology comedy about a rental cabin in a small mountain town features a rotating cast of out-there characters and a Coen Brothers-like zeal for interconnected storylines. Each episode stands alone well enough, but The Guest Book will ultimately work best as a 10-part whole on whatever streaming service it eventually winds up on—at which time, I'll be asked "Have you seen this new show on Netflix? It's sooo funny and weird! Love it!" Bonus: Indie-folk duo HoneyHoney closes each episode, Twin Peaks-style.

Speaking of Twin Peaks (two-hour season finale Sunday, Sept. 3, Showtime) ... yeah, so that happened. The Return, Showtime's 18-episode series revival, has been more for fans of David Lynch in general than Twin Peaks-specific devotees, a careening WTF? ride with many a fantastic performance (Naomi Watts! David Duchovny!), brain-imploding visual (the atomic nightmare collage of Episode 8), and tear-jerking farewell (R.I.P. "Log Lady" Catherine Coulson). But what does it all mean? Maybe the finale will reveal all, or not. Best to just consider Twin Peaks a summer diversion that at least drew some eyeballs back to the original series, and set up a Wally Brando spin-off (let's make this happen!).

You know who could really use Dr. Jacoby's golden shit shovel? CBS. In a garbage fall 2017 network TV forecast, the Eye Network will be churning out the rankest trash of them all—which makes their CBS Fall Preview (Monday, Sept. 4, CBS) a gotta-watch trainwreck: "What could be a worse idea than Young Sheldon? Hold our beer! Besides that forgone conclusion, we have SEAL Team and S.W.A.T., which are the same show—and Red State 'Merica will looove 'em! Also, there's Wisdom of the Crowd, yet another tech-billionaire-solves-crime procedural! And don't forget new sitcoms Me, Myself & I and 9JKL—at least not before we cancel them and plug in Big Bang Theory reruns! Only ... CBS!"

I'll continue to argue that Season 1, Murder House, is still the best of the series, but American Horror Story: Cult (Season 7 premiere Tuesday, Sept. 5, FX) looks promising as hell. Cult begins on election night 2016, with Trumpy the Clown's victory shattering leftie Ally (Sarah Paulson) and delighting loony Kai (Evan Peters)—but it's not about politics. Showrunner Ryan Murphy says this season is about paranoia and "the euphoria and the fear" of the nation (which is current politics, but whatever). Several regular AHS players are returning for Cult, joined by newcomers like Billie Lourd, Alison Pill, Lena Dunham(!) and Billy Eichner(!!). This might finally be the one to top Murder House ... thanks, Trump?

When we left You're the Worst (Season 4 premiere Wednesday, Sept. 6, FXX), Jimmy (Chris Geere) had just proposed to Gretchen (Aya Cash) ... and then abandoned her on a hilltop. Jimmy's cold feet haven't warmed up at the outset of Season 4, Gretchen's bitterness hasn't cooled off, and hangers-on Lindsay (Kether Donohue) and Edgar (Desmin Borges) have no idea how to function in a post-GretchJim world. Don't be sad: As funny as they were as self-absorbed/-destructive bang-buds reluctantly falling in love, Gretchen and Jimmy are even more darkly hilarious as toxic exes who'll inevitably get back together—if Gretchen's revenge schemes don't kill him first. Hulu Seasons 1-3 now, if not sooner.