Plus: The Glades, Longmire, Kendra 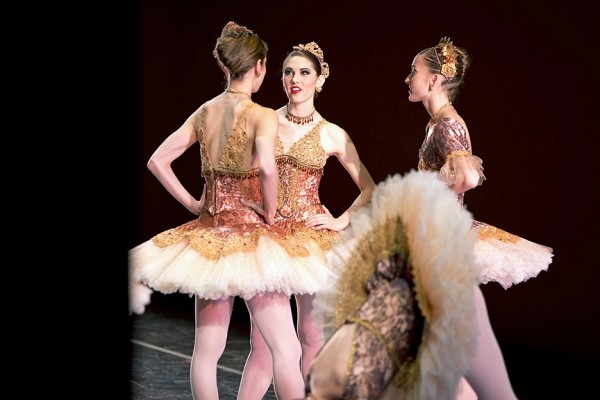 Breaking Pointe
Thursday, May 31 (The CW)

Series Debut: Unless it stars Tyra “Smize Eyez” Banks and some catty wannabe models, nobody watches regular-season CW reality shows. A summer CW reality show about ballet dancers? The network might as well run infomercials or Hart of Dixie episodes re-enacted with sock puppets (actually, that sounds better than the real Hart of Dixie). The local twist for Breaking Pointe is that it’s all about Salt Lake City’s Ballet West and “the dark side of this seemingly perfect world; the jealousy, competition and intensity behind the scenes.” But since this is a classy BBC production, there’s not enough dirt for the CW demo, and there’s not a lot of SLC flavor for the locals, either—that leaves ballet fans and Ballet West employees. Still, that’s more viewers than The L.A. Complex attracted, so Breaking Pointe may have a future, after all.

Series Finale/Burn-Off: This six-ep series about two 30-something girlfriends (comics Lennon Parham and Jessica St. Clair) and a third-wheel boyfriend (Luka Jones) was too sweet and low-key for NBC’s … rigorous? … comedy standards, which explains why it was yanked weeks ago in favor of more Betty White’s Geezer’d. Catch the previous four installments on Hulu, watch the final two tonight, then wonder if any of NBC’s numerous fall comedy pickups are as promising as Best Friends Forever was (spoiler: they aren’t).

Magic City
Friday, June 1 (Starz)
Season Finale: Less cartoon-y than Spartacus, less grimly ponderous than Boss and, at the very least, less canceled than any other Starz original, Magic City has carved out a surprisingly vivid little world that borrows equally from Mad Men, Boardwalk Empire and a stack of postcards from 1959 Miami—and since this is Starz, there’s also plenty of nudity, sex and violence. Troubled hotel owner Ike (Jeffrey Dean Morgan) closes the season stuck between the mob, the cops, his ex-wife, his current wife, his son’s bad choices and the possibility of running out of vintage furniture and real boobs for set décor. Another overlooked series to catch up on over the summer—get on it.

The Glades, Longmire
Sunday, June 3 (A&E)
Season Premiere, Series Debut: Since A&E just canceled Breakout Kings, The Glades has now become the cable net’s veteran original drama by making it to Season 3 … so, there’s that. Where The Glades is a passable approximation of the money-printing USA Network formula (good-looking, affable cop solves quirky crimes surrounded by gorgeous scenery), the new novel-based Longmire looks like a direct lift of FX’s Justified, relocated to Wyoming and juiced with slightly more star power (The Matrix’s Robert Taylor is Sheriff Walt Longmire, Battlestar Galactica’s Katee Sackhoff is his deputy and Lou Diamond Phillips is his requisite wise Native American confidante). Now, The Only TV Column That Matters™ will watch anything with Katee Sackhoff in it—lone Bionic Woman viewer, right here—but Longmire might be a little too gritty and thinky to last on A&E alongside real redneck genius like Duck Dynasty.

Kendra On Top
Tuesday, June 5 (We)
Series Debut: Unlike the 2009-11 Peabody-nominated E! series Kendra, which chronicled the fascinating day-to-day life of mentally challenged former Playboy playmate, Girls Next Door star and Hugh Hefner repository Kendra Wilkinson and her slow-witted NFL player husband Hank Baskett, We’s (it’s a cable network, look it up) new Kendra On Top will chronicle the fascinating day-to-day life of Kendra, Hank, child Little Hank and—squeal!—just maybe baby No. 2! How did E! let this one get away?!