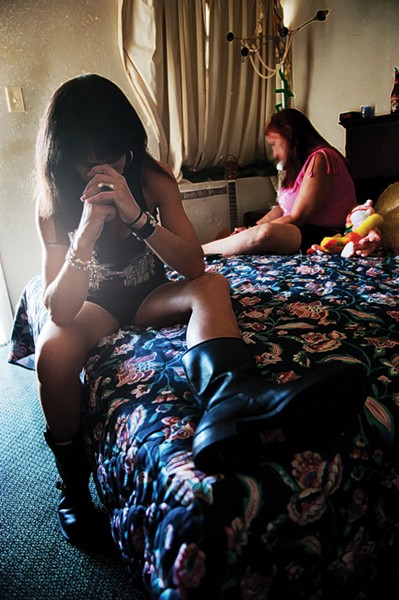 Candyss and Tina in their motel room in 2013.

In summer 2013, sex workers Donna Steele and two others, Candyss and Tina (both pseudonyms for this story), were living and working on State Street in downtown Salt Lake City. Steele and Tina walked State Street between 1300 South and 2100 South, waiting for drivers to signal their interest in paid sex in parked cars or motel rooms. Candyss took refuge in a cramped, dark motel room she shared with Tina, who was also her romantic partner. Their lodging was paid for by Candyss' sole longtime client.

All three were trapped in a vicious cycle of using sex work to pay for lodging and drugs. Their only recourse for medical care, as reported in the Aug. 22, 2013, City Weekly cover story "One Way Street," was a two-person mobile-medical outreach from Fourth Street Clinic, which connected them with limited services. Housing and a life beyond prostitution seemed beyond their reach.

Fast-forward 20 months, and two of the three women, Steele and Candyss, have recently obtained housing through Utah's Housing First program, which prioritizes housing over all other considerations. A key element in Utah's much-praised 10-year plan to end chronic homelessness, Housing First uses a "Vulnerability Index" (VI) to prioritize those most in need.

While sex workers score high on the VI, and advocates say there are increasing conversations on how to get them services, they remain, paradoxically, a largely invisible population. Due to federal guidelines, an annual count of the chronically homeless in the state, known as Utah Point in Time, does not include street sex workers, whose chronic homelessness is masked by a complex cycle of sex work used to pay for lodging in dingy motel rooms and for drugs, which help quell mental-health issues tied to sex work and sexual abuse.


The Asian Association of Utah provides help for refugees and immigrants. Its case manager for human-trafficking victims, Gina Salazar—a longtime advocate for sex workers, impassioned by her own 15 years as a street sex worker in Salt Lake City—knows of five impoverished sex workers who have achieved permanent housing. From her own count at the 2014 Point in Time, Salazar estimates that still leaves more than 100 female sex workers, and an unknown number of males, living in "masked" chronic homelessness—not considered homeless because they live in rented hotel rooms used for work and shelter.

That Candyss, Steele and the others found stable housing, Salazar credits primarily to the determination of advocates who helped the women overcome nearly insurmountable roadblocks. These barriers include a severe shortage of low-income housing and a complicated, time-intensive application process required for housing vouchers. Then there's dealing with federal and local regulations that weed out those with eviction histories, violent felony records and drug addictions. Replacing lost or stolen IDs requires hours of wait time at state offices which, for homeless sex workers, means worrying about money for that night's rent. Most difficult of all, advocates say, is attempting to clear up outstanding warrants and accompanying fines in court, and facing possible jail time in the process.

A Time Out in God's Hospital


Steele, who is 55 years old, was close to getting housing in summer 2014 until black mold in an apartment lined up for her by Volunteers of America derailed it. Subsequently, she was bitten savagely by a dog while walking State Street and, at times, had no place to sleep except in a stairwell.

Ed Snoddy, VOA's medical-outreach coordinator, succeeded in getting her into an apartment, albeit only a few blocks from the section of State Street where she sold sex and used drugs. While appreciative of VOA and Fourth Street Clinic's efforts to get her housed, "I felt like I was set up to fail," Steele said one afternoon in mid-January while curled up on an easy chair in her apartment's living room, the curtains drawn.

Her front door is marked by stickers from notes she'd put up asking people she knew from her nine years of homelessness and street sex work to stop knocking on her door. She pays $214 a month in rent to The Road Home, which leaves her $500 from Social Security. As she is concerned about ending up back in the milieu of street drugs, she says, "One reason I've asked to be moved from here" is so she can pursue a four-day detox program at LDS Hospital through Medicaid. Being so close to that world, "They can't expect me to quit."

Candyss and Tina moved from State Street to a motel in the Smith's Ballpark neighborhood. "It was hard to pay money to slumlords and have anything left over," Candyss says. She resolved to get into housing and, with Salazar's help, went to court and cleared up outstanding warrants at the Sunset City and Salt Lake City justice courts. She then applied for Shelter Plus Care, a program that provides both housing and case management, to the Housing Authority of Salt Lake County. The program includes weekly case-management meetings and other wrap-around services such as counseling and harm-reduction programs relating to drug addiction.

Initially, Candyss' application was denied, because, Salazar says, "of her criminal history." On appeal, Candyss talked to the two-member hearing committee about her efforts to get clean and start afresh, while Salazar spoke of Candyss' promotion of medical outreach to sex workers in the media. On Jan. 3, 2015, Candyss learned she had won her appeal.

No sooner had Candyss moved into a small basement apartment a few blocks from North Temple in mid-January than Tina was arrested on drug-related charges and is now serving 180 days in the Salt Lake County Metro Jail. "I was so happy she was in jail," Candyss says. "I was afraid she'd hurt someone or herself, she was acting so desperate." Salazar concurs, referring to jail time as "God's hospital" for the time out it offers from the cycle of sex work and addiction.

In a jail interview, Tina demonstrates the benefit of that time out. Her eyes and skin are clear, her infectious laugh rings loudly in the visiting area, and she's lost the puffiness Candyss associates with her drug use. Tina says she wants to get into housing, too. But when she is released, she faces a gap in services for women who, while sober, have to deal with years of sex-work-related trauma and mental-health issues without shelter, except for The Road Home.

That gap became painfully apparent to Fourth Street Clinic's former mobile medical-outreach team director Joel Hunt who—with the help of Jimmie Long, the Salt Lake County Jail's mental-health director, and Lynn Unger, a social worker who runs a program at the Salt Lake Legal Defender Association office that connects the incarcerated mentally ill with services at Valley Mental Health—began conducting "in-reach" to jailed sex workers and the homeless in 2014. Hunt achieved significant progress with Diane (a pseudonym), a veteran sex worker who turned a corner in terms of beginning to address the complex issues at the root of her sex work and addiction.

The night Diane was being released in November 2014, she was desperately trying to locate a "Captain Save-a-ho"—in this case, she was trying to phone a meth-using client who promised her a bed to sleep in with no strings attached. When she couldn't find him, she ended up at what she called "her old stomping ground"—namely The Road Home. "I don't want to go back there," she said.

Early the next morning, an ambulance was called to the shelter after Diane relapsed and overdosed. "It's terrible to see there's nothing for her right now," Hunt said. Diane subsequently went back to the streets.


Now that Hunt has relocated to a clinic in Texas, his replacement at Fourth Street Clinic, nurse practitioner Phil Taylor, is a quieter but equally impassioned advocate for the homeless and street sex workers. Taylor, along with his medical assistant Leticia Vasquez, as well as Shannon Cox with the nonprofit Journey of Hope—which helps women at risk of incarceration—and the Asian Association's Salazar, all share deep frustration that Utah's largest domestic-violence (DV) shelter, the YWCA, does not accept sex workers, due in part to the complexity of their needs.

Keri Jones, the YWCA's chief of programming, says criticism that the shelter only takes "cookie-cutter" DV cases is not fair. "It's not about falling into simple definitions; it's about us trying to meet demand."

Jones noted that the YWCA is typically at capacity with 250 people, 150 of whom are children. Sex workers, she says, "are really complicated cases. While I appreciate DV can be part of their history, that may be only a piece of what's going on for them." Can the YWCA best serve those in need of intensive case management, she asks? "Bottom line is: We can't serve them all."

Steele expresses concern for the increasingly young women and even girls she sees working State Street. "I just wish we'd put something in place for these vulnerable ladies," Taylor says of the valley's sex workers. "I think if we don't do something, we just sort of perpetuate the vulnerability to another generation."

In the past six months before Tina went to jail, her highly complex relationship with Candyss' had already deteriorated to the point where neither was sure if they had a future together. According to the court docket, if Tina successfully completes the jail's substance-abuse Community Addiction Treatment Services program, she will be considered for early release. Tina does not know where she will go, but in her newly found sobriety, she knows she wants housing.

"While you've got the ability to do something different, it just sucks there's nothing different to go out and do," Salazar says.