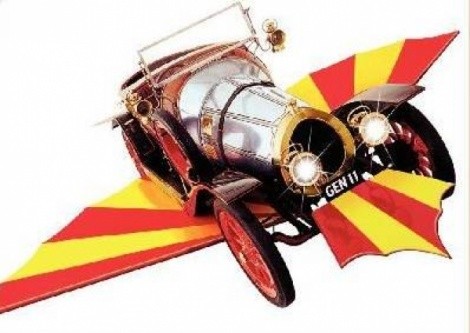 Everyone knows that Ian Fleming created James Bond. But did you know that he created a flying car that—thanks to the song by Mary Poppins composers Richard and Robert Sherman—we know and love as “our fine four-fendered friend?”

Written for his son in 1964, Fleming’s book follows inventor Caratacus Pott as he renovates an old sports car, which begins to take on a personality of its own—and a yen for taking to the air. The book became a film starring Dick Van Dyke in 1968, and later a 2002 London stage musical that hit Broadway in 2005. The current touring version—with a script adapted by Ray Roderick from Jeremy Sams’ book—re-creates the beloved story, and includes classic Sherman Brothers’ tunes like “Truly Scrumptious,” “Toot Sweets,” “Hushabye Mountain” and the infectiously singable, Oscar-nominated title song. Everyone now: “Oh you pretty chitty bang bang, Chitty Chitty Bang Bang, we love you …”