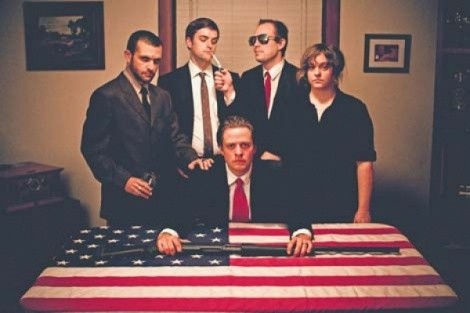 Salt Lake City group Bronco has an air of familiarity about their name and their sound: folksy alt-country-influenced music that’s not too country, a melodic sound that fits like easy-wearing jeans, without being “easy listening.” The 2011 Bronco is a new musical vehicle; remodeled and retooled, roomier yet still an adventurous ride.

All right, enough with the automotive metaphors.

Bronco started life as a solo project for Tyler Anderson, singing and playing guitar and harmonica, around 2004. But after several years, the affable plumber-by-day found himself fronting a full-fledged band, with Mike Kuczma on drums, Angie Midgley (formerly Eraley) on bass and vocals, Ryan Shelton on guitar, and Angie’s husband Greg Midgley joining shortly after the rest on keyboards.

After building up their repertoire, Bronco went into the studio and in late 2007 emerged with Constant Everything, a solid set of tunes released on then-local label Ruby Records, operated by Gared Moses, frontman of the former Salt Lake City band Callow, now residing in the Bay Area of California.

The rough-hewn songs of Bronco tell stories, but the band has had its own rough story, losing Kuczma to a drug overdose in May 2010.

Now the band is working on the follow-up to Constant Everything, tentatively titled Painting Pictures of a Perfect Life, and while the title is ironic in light of the hard-luck stories told therein, these pictures are perfectly framed, in melodies that make themselves at home inside your head.

All 11 songs have been recorded, and the band is working on the mastered versions, with three of them at the final mix stage as of this writing. “Don’t Slow Me Down” is about “people living in Draper next to a strip mall, on credit cards with a big car and house, then when things go wrong, finding someone else to blame,” explains Anderson.

Some of this music is the result of a kind of serendipitous creation. A song like “You’re Too Good To Have a Good Time” was conceived in the middle of the night, the title coming from a 3 a.m. phone call from Kuczma to Anderson. The band’s enthusiasm in creating it comes across to the listener, too, as you find yourself tapping your toes or helplessly humming along. “Waterloo” has more of a bluesy, hippy sound, partly thanks to Shelton’s meandering lead guitar.

Originally playing in heavy metal cover bands, then “sad indie music,” Shelton finds the music of Bronco keeps his interest like nothing before. “I can’t think of anyone else we sound like,” he notes, although Anderson admits listening to a lot of Bob Dylan and Steve Earle. The individualist singer-songwriter format isn’t something you can copy, though. Either you have your own voice or you don’t, and Anderson definitely does.

It‘s all about the stories. “These songs are more about characters, less about you personally,” Shelton suggests to Anderson.

“A lot of the songs on the new album are about true-blooded Americans with guns,” laughs Anderson. “Brother’s Keeper” is about the stereotypical “tea bagger” gun-toting right-wing fringe element. As with the first album, local musical whiz Mike Sasich is producing this one, and the new songs were recorded at his Man Vs Music studio.

A big part of the band‘s progress is the addition of new drummer Ryan Gee; three of the songs were recorded when Kuczma was still in the band. “Ryan meshes perfectly with the band,” Shelton maintains. “It‘s been a seamless transition.”

“This one is a little less country, a little more rock & roll,” Anderson has decided, applying the Donny & Marie equation to Bronco’s music. “I couldn’t be happier with the band, where it’s at right now with these players and songs.”

The band is thinking of releasing the album on vinyl this time, with a smaller quantity and digital download included.

“It’s literary, I’d say,” adds Shelton. “I can easily see it coming with a graphic novel.”