Progression and evolution on new album, Up& Up 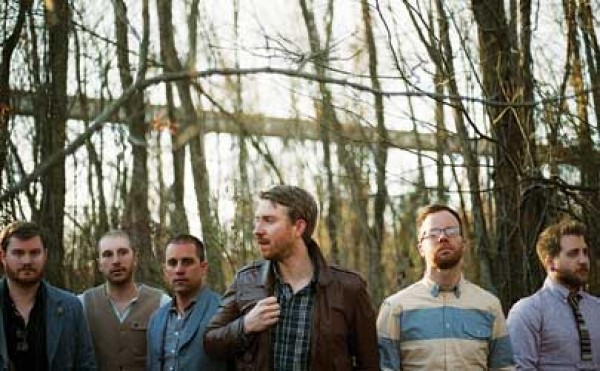 It’s unknown whether Chris Henderson, the vocalist and songwriter for Connecticut roots-rock six-piece Bronze Radio Return, is familiar with this proverb. But it sure does make for an apt summary of the process that led to the band’s most recent release, Up, On & Over, released in June.

“We recorded it last year in rural Virginia on a goat farm,” Henderson says with a laugh. “When making an album, we always like to go to some remote location with limited distractions and communications for a month or so, and really focus on working on it all at once. The recording process for Up, On & Over certainly fit that mold because we went somewhere where there wasn’t much to do besides record, play pingpong and drink whiskey.”

Having all that time helped the band make a cohesive recording that touches on various personal subjects. The ambient piano and acoustic-guitar-led “World Spin, Home Spun” focuses on the band’s awareness of what they regularly leave behind to be rock & roll musicians, while the piano pop-rock gem “Rather Never Know” highlights the darkness that gaining life experience can sometimes bring. And the foot-stomping, hand-clap-heavy first single “Further On” is interesting as much for its content as for how it ended up on the record.

“It actually wasn’t even going to be on the album,” Henderson admits. “I had written it for a tour video we did, and then set it aside and thought, ‘We won’t do anything with that song.’ But when it came time to start picking songs, my dad called me and said, ‘I’ve been listening to that song and I think you should do it.’ I said, ‘I don’t know. I’ll bring it in, but there’s a bunch of other songs we’d rather do.’ But our producer thought it was great, so we ended up recording it, and now it’s our first single.”

But “Further On” is more than just a catchy, organic song that has garnered the band attention with its use in a PGA Tour ad; the lyrical theme of growth on the track is also emblematic of Bronze Radio Return’s evolution as a band, away from fitting into a certain genre.

“In our earliest days, we leaned toward blues rock,” Henderson says. “A lot of us grew up listening to blues music, and several of us studied jazz at school, so we had some of those leanings earlier, but our sound is more open to different structures and tones now. We’ve become more open-minded about making music that just feels good to play and is something we can proud of.”

Making music they can be proud of and being free of genre restrictions are things the band takes very seriously, but music is specifically important to Henderson for other reasons, too.

“Music is often a timestamp for me,” Henderson says. “Some people can recall how, ‘In 2005, this happened,’ but I have such a hard time recalling years. It’s much easier for me to recall, ‘This is during a time when I was listening to a lot of Ryan Adams.’ It’s also a great way to express feelings and thoughts, and to hear how other people interpret things. Maybe you agree with them or disagree, but I think that’s what makes it a fascinating art form.”

More than anything, though, Henderson appreciates the power that music has to connect people.

“I love the sense of community that comes from music,” Henderson says. “I love working and creating with other people. Being creative is really important to me. I love the adventure of music. I love traveling. I love meeting and talking with people. I love connecting with people, and music is a vehicle for that.”