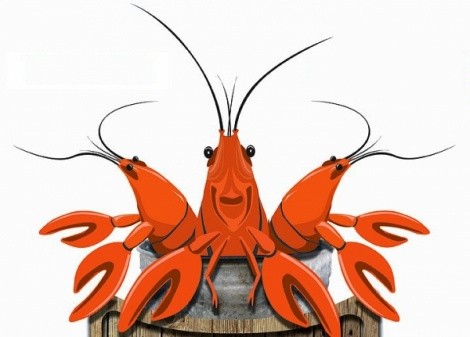 Restaurateur Mai Nguyen has already knocked it out of the park with her Pho Green Papaya and Sapa Sushi Bar & Asian Grill. And now, to mix sports metaphors, she’s going for a hat trick. West Valley’s Bucket O’ Crawfish—yes, that’s the real name of the restaurant—promises to be wildly popular. Why? Well, because the food is great, the funky ambiance is fun and it’s unique. The closest similar restaurant I know of requires a drive or flight to Las Vegas, to the Hot N Juicy Crawfish location there.

Here’s the lowdown: Bucket O’ Crawfish, located right next door to Pho Green Papaya, is a seafood boil spot, which might require a little explanation. In the South, and especially in Louisiana, crawfish boils (and other seafood) are common. Live crawfish—known in Louisiana’s bayous as “mudbugs”—are boiled in huge pots, usually along with Cajun seasoning, potatoes and corn. Shrimp and crabs are treated similarly. Once the seafood is cooked, it’s piled right onto a table, typically covered with butcher paper, plastic or nothing at all. Diners just dive in, eating with their hands and making a delicious mess in the process. And that’s precisely what is going on at Bucket O’ Crawfish. It’s a beautiful thing.

The seafood boil places I’ve been to in the South were dives; I say that affectionately. Bucket O’ Crawfish strives to replicate that seedy, roadhouse-type ambiance, but it’s just a little too clean and nice. There’s a long bar (beer only) on the right, tables down the middle of the restaurant with another dining area in back, and elevated seating with more tables and booths off to the left. Customers are encouraged to autograph the wood walls with magic markers, giving the joint a funky and fun feel.

The menu is almost identical to Hot N Juicy in Vegas, right down to the Cajun fries that come with each “basket.” Boiled seafood is priced by the pound. So, the first step is to order your choice of clams, shrimp, blue crab, snow crab, Dungeness crab and/or crawfish. Next, you choose a seasoning: Cajun, garlic butter or lemon pepper. Finally, select your desired heat level: mild, medium, hot or crazy hot.

If you’re lucky, you’ll get an attentive, friendly server like Jason. He will put plastic bibs on you—as I said, eating like this is messy—fetch drinks and keep your water glass filled to the brim. There’s a nice beer selection, including Uinta Cutthroat and Boulevard wheat beer on tap, with pitchers available, and Heineken, Modelo and others in bottles. There’s also genuine Mexican Coca-Cola and Fanta in the cooler.

The seafood comes to the table cooked and seasoned in plastic bags. You simply dump the crawfish, shrimp or whatever you’ve ordered onto the plastic-covered table and go to work. Metal buckets are provided for discarded shells and used paper towels, of which there will be many.

We began with a pound of crawfish, market-priced at $10.95 per pound. Prices here are substantially higher than you’d find in Louisiana, Texas, Alabama, etc. But then, we don’t live on the Gulf Coast, where much of the seafood originates. One pound of crawfish was a bit more than I expected: probably 20-25 or so cooked crawfish. Corn on the cob is added for free if you order 2 pounds or more seafood in the same bag. We tried the hot Cajun seasoning with the crawfish, and it was very good—not too spicy, but just enough heat to get your attention. Next, we ordered a pound of shrimp, medium-spiced with garlic-butter seasoning. The medium-size shrimp are served tail-, legs- and heads-on, as they oughta be, and perfectly cooked—tender and juicy. This was a happy surprise for me: Shrimp, crab and crawfish were all cooked to perfection. It’s very easy to overcook seafood and render it as tough as shoe leather, so kudos to Bucket O’ Crawfish for getting it right.

Well, almost. Our pound of clams ($9.95 for about 15) arrived with most of the shells closed. We were told that the chef cooks them that way intentionally so the clam meat doesn’t “shrink.” Huh? I’ve always been told to avoid clams and mussels with unopened shells because it’s a sign they are dead. We were given small forks and advised to pry the clam shells open. I don’t think so. When we passed on that offer, our server courteously returned the clams to the kitchen for further cooking. When they reappeared, they were still mostly unopened. And no offer was made to remove the unopened and uneaten clams from our bill. Skip the clams.

Medium-spiced snow crab legs ($12.95) with lemon pepper were tender, juicy and delicious. But, the more food we ordered, the more everything began to taste similar. That’s because the seasonings—which sort of turn into gravy on the table—all meld together, and the strongest flavor, which is Cajun, wins. But I really liked the Cajun seasoning, so I was as happy as an uneaten clam.

Along with boiled seafood, Bucket O’ Crawfish also has Cajun chicken wings and fried-seafood baskets: calamari, catfish and shrimp. We sampled the catfish basket ($9.95), which came with a side of Cajun fries, and it, too, was terrific. The catfish nuggets were breaded and deep-fried with a crispy, crunchy exterior, but juicy and tender inside. I don’t think I’ve had better catfish in town. And the Cajun fries were also excellent, served with both fry and tartar sauces.

What can I say? Except for the clam fiasco, I love everything about Bucket O’ Crawfish. As my buddy said, enthusiastically, when the mudbugs were dumped onto our table: “I’m gonna eat the fuck outta those things!”