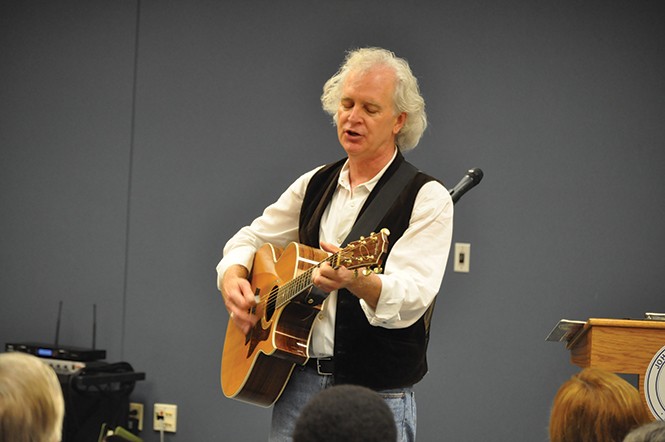 Though it's a century too late to save Joe Hill from the Utah firing squad, Bucky Halker wants to rescue him from the folkies.

Labor activist and songwriter Hill was the bard of the itinerant and the immigrant, the unskilled and the unwanted. He took the raw material of working-class lives and turned it into music—songs to amuse, to organize, to "fan the flames of discontent." As semi-official songwriter for the militant Industrial Workers of the World—popularly known as the Wobblies—he composed songs to be sung on soapboxes, picket lines or in jail.

In 1914, Hill was arrested in Salt Lake City and charged with killing a storekeeper, allegedly in a botched robbery. Despite the flimsy nature of the evidence, Hill was convicted and sentenced to death. An international amnesty movement pressed for a new trial, but Utah Gov. William Spry refused, and Hill was executed on Nov. 19, 1915. In a final message, Hill urged fellow workers, "Don't waste any time in mourning—organize."

Since his death, Hill has been immortalized in a wide variety of cultural expression: poetry by Kenneth Patchen, fiction by Wallace Stegner, a song by Alfred Hayes and Earl Robinson, popularized by Paul Robeson, promising "wherever workingmen are out on strike, Joe Hill is at their side." But primarily, Hill's legacy has been kept alive by such folk artists as Joan Baez, Phil Ochs and Utah Phillips. On Sept. 5, several performers—including Judy Collins and Joe Jencks—will play a free all-day concert at Sugar House Park commemorating the centennial of Hill's death.

Halker, a Chicago musician and labor historian, has released a CD of new interpretations of Hill's music Anywhere But Utah—The Songs of Joe Hill (Revolting Records, available online at CD Baby), taking his title from Hill's dying wish that his remains be transported out of state, because he didn't want "to be found dead in Utah." Inspired by Hill's mastery of working-class vernacular and various music styles, Halker draws on a wide range of musical forms while maintaining the humor and pointed commentary of the originals. The album includes such familiar Hill classics as "The Preacher and the Slave," "There is Power in a Union" and "The Rebel Girl" as well as some surprising obscurities, like the wistfully romantic "Come and Take a Joy-Ride in My Aeroplane."

"I wanted to make a record that Hill would like," Halker says. "That was my priority from the beginning. I don't think he'd like a straight folk-revival, strumming-acoustic-guitar approach, as that has nothing to do with most of his material. He played the piano and the fiddle, after all. The folk revivalists did a great service by keeping Hill's work in circulation but trying to keep him in that small musical box is way off the mark. So, I borrowed from vaudeville and the music hall, piano blues and early jazz, alt-country, swing, punk and gospel."

Hill occasionally wrote his own music, but he typically adapted the tunes of hymns or popular songs of the day. As Halker comments, "With all his tune choices, he was like other working-class writers and had the same goal—use tunes that workers knew already for labor songs, and then they'd be easy for workers to sing.

"Music was a centerpiece of the Wobbly movement culture," Halker continues. "The IWW cleverly used singing and chanting as a way to garner attention from workers, the media and the authorities. Fifty workers singing makes a lot more noise at a rally or in a jail cell than one speaker on a soapbox or one person ranting in the joint. Singing jailbirds can make a big ruckus, one that the taxpayers and authorities discovered early on."

Hill's mastery of American vernacular is especially impressive given his background as a Swedish immigrant. "His work is filled with humor, irony and sarcasm, hardly easy skills to gain in your second language," Halker comments. "You can tell from his lyrics that he paid close attention to the music-hall and Tin Pan Alley writers of the day."

Halker believes Hill's legacy continues to resonate because many of the issues he discussed remain timely. "I think there are many people who hear his songs and immediately sense that the issues raised by Hill and other Wobbly bards remain important to our national discussion—including decent wages and working conditions, immigrant rights, discrimination based on race, the oppression of women, the right to form a union and the right to free speech.

"I think that Hill and other Wobbly bards and writers should get some credit for their use of sarcasm and irony in the development of American literature," Halker continues. "They had sharp wits and tongues that worked deftly and at great speed, something which only pissed off the lunkhead bosses, the law and the ruling elite even more. The authorities and their lackeys dislike radicals, and they really hate them when they're much smarter than they are."