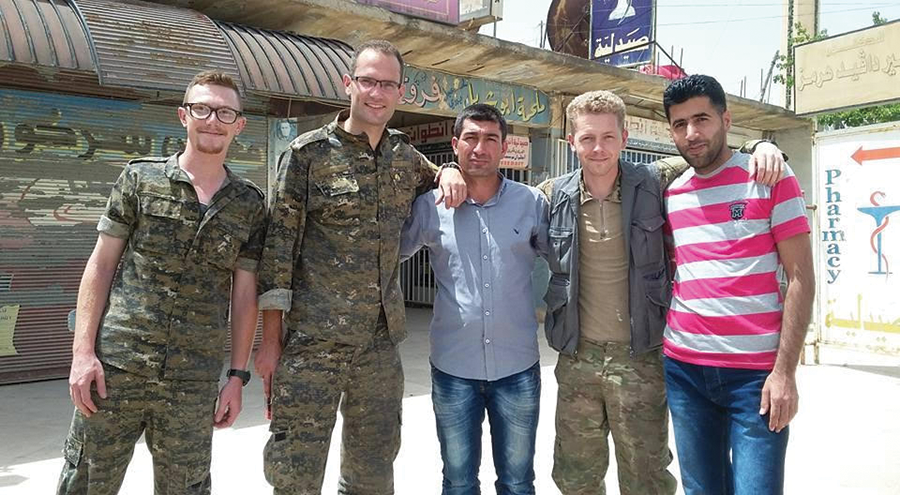 Light streams through a glassless window in a stone-walled house while Porter Goodman surveys the articles once belonging to a family. With him in the small Syrian home encircled by an orchard is fellow American Levi Shirley. Shirley makes a wrong move. The concussive force of expanding gas ruptures the room and sends both men hurtling through the air. While Goodman comes-to, naked on an Iraqi operating table, Shirley isn't so lucky—another unfortunate casualty of a grisly war.

Goodman is in a daze with shrapnel wounds stretching from the back of his legs to his waist; his injuries only become excruciating when he tries to move. The men around Goodman, due to an intelligence mix-up, inform him he was a passenger of a vehicle which ran over a mine. In actuality, Shirley triggered an improvised explosive device inside the house. Shirley convinced Goodman to accompany him to investigate the abandoned residence for souvenirs to trade with the U.S. Special Forces for MREs (Meals Ready to Eat). While these two were interacting with U.S. forces, their presence was not sanctioned by the U.S. government—they were volunteer fighters for the Syrian Democratic Forces (SDF).

Previously known as the YPG (People's Protection Units), the SDF has been the U.S.' ally in the fight against ISIS in Syria and has attracted many foreign nationals. The group comprised of mostly Kurdish fighters, both men and women, has gained international legitimacy stemming from its success in combating ISIS and its ability to provide localized governance in Rojava, the autonomous Kurdish region in northern Syria.

Joining the SDF in 2016 at age 28 was not Goodman's first experience in war, though it was his first experience in direct combat. In 2005, at the ripe age of 17, Goodman joined the Army. This is a family tradition in the Utahn Goodman household: Out of five children, four served in the military, plus their father. All completed short stints in the armed forces in order to pay for their respective Latter-day Saint missions and subsequent college tuitions. After being stationed in upstate New York, Goodman's unit—the 10th Mountain Division—deployed to Iraq in 2006 for a 15-month tour. While there, he served on a recovery team. Anytime a vehicle or other was destroyed off-base they would retrieve it. Although never in a fire fight, he and his team were hit by IEDs.

Without that Army experience, Goodman says, he wouldn't have joined the SDF. "Since I deployed in Iraq, I've always had an interest in what's going on in the region," Goodman tells City Weekly in his newly furnished townhome tucked against the Provo mountains. "Anyone who's deployed to Iraq knows that the Kurds in Iraq are our friends. They have our backs."

After leaving the Army, Goodman, not the stereotypical straight-A student, bounced from college to college, eventually received a degree and became a software developer. He had his finger on the pulse of the Middle East and became enamored with the cause of the SDF. Not only were they pushing for absolute gender equality and protecting persecuted peoples, they were also implementing a new form of localized governance—the first successful democratic experiment of its kind in the Middle East in arguably decades.

He found the YPG's website, informed them of his experience and filled out a questionnaire designed to rule out blood-lusters. The group's response was in the form of an invitation to join them in Syria. At the time, Goodman's relationship was fizzling out and it dawned on him that it was well within his power to travel 7,000 miles to join a foreign army. He didn't think his family would be understanding, though, and informed them he had accepted a job in Connecticut. His family and friends threw him a goodbye party.

"My thinking was, I didn't want to just disappear," Goodman says. "I wanted them to be able to say goodbye."

Upon arriving in Syria, Goodman performed civilian duties in Qamishli on the border with Turkey. For the first three-and-a-half months, he helped with translation, taught children how to use computers and do basic math.

"I was playing a consulting role," he says. "I was basically just going around doing random crap."

He then heard about a frontline medical unit comprised of Westerners and elected to join. The Kurds, he says, do not have many skilled medical personnel in their militaries, and therefore his admittedly outdated civilian EMT training provided by the Army 10 years prior was a sufficient qualification.

In the field, he treated many Kurdish fighters and civilians along with a few ISIS fighters. Even though he and the fighters held starkly opposing worldviews, he still respected them as human.

"I didn't ever want it to become personal," Goodman says. "I am against what they are for and I will fight to stop them from achieving what they want to accomplish."

And what exactly was he fighting for? He believes the new form of democracy being implemented by the Kurds in Rojava is the "democratic confederalist revolution."

He believes the new form of democracy being implemented by the Kurds in Rojava, known as democratic confederalism, is revolutionary.

To Goodman, this local governance is helping to solve some of the most entrenched issues in the Middle East: corruption, oppression of women, sectarian strife and the oppression of religious minorities. In this granular system, each group or region is allowed to govern how they best see fit and design laws, public services and communication networks in ways that function for each of them. Goodman says this works for two reasons: First, the Middle East, prior to the WWI Sykes-Picot Agreement—which imposed arbitrary state lines drawn by European imperialists—functioned on a tribal basis. Secondly, a decentralized government means less room for corruption. The society basically "ignores the state," Goodman says.

At the core of democratic confederalism, according to Goodman, is all the power being at the community level. The Kurdish people are one of the largest stateless groups in the world and instead of trying to fight for independence from the intransigent Bashar al-Assad regime, they took a pragmatic approach: to ignore the president they didn't vote for and design a society which works well for the inhabitants, Kurdish or not, Goodman says. Rojava was once comprised of three cantons: Afrin in the West and Kobani and Cizere in the East. In February of 2018, though, Turkish forces at the insistence of President Recep Tayyip Erdogan invaded the Afrin Canton and expelled more than 100,000 Kurdish people.

Goodman, although back stateside, still holds strong opinions on the future of the region. One of these is that it is extremely detrimental to not only the Kurdish democratic cause, but the safety of the Kurdish people for the U.S. to pull troops out of the region. President Donald Trump announced earlier this year that he plans to reduce the number of U.S. troops in Syria from 2,000 to 200, all while keeping their mission intact. According to Goodman, this will be a direct threat to the democracy-building the Kurdish people have engaged in, and will also leave them unprotected from Turkish incursions.

President Trump is framing U.S. troops remaining in Syria as an intractable war akin to the U.S. involvement in Iraq, but a main difference is that the U.S. is not planting seeds of democracy, the U.S. is merely helping the Kurds succeed on a mission which they began themselves, Goodman says.

"Democracy building that someone else is doing for themselves. How refreshing is that?" Goodman says. "And we're already there to support that, we're in position. We don't have to mobilize anything to help them succeed, all we have to do is stay on the ground."