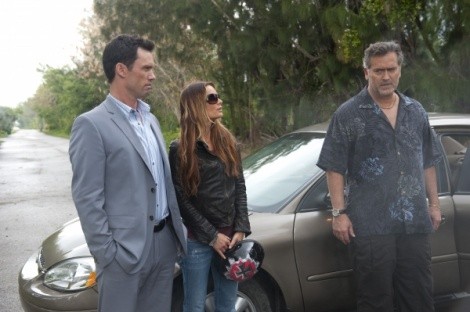 Season Premieres: In Burn Notice’s previous season cliffhanger, burned spy Michael Westin had been kidnapped and hauled off with a bag over his head, only to wake up to the hellish torture of … a nicely furnished apartment and a polite man who’d like to “talk.” Is Michael back in with the The Man (the CIA), or is he being recruited by The Other Man (the mysterious Management goons)? Despite the Miami backdrops and flashy promos, Burn Notice runs deeper and darker than the rest of USA’s lightweight lineup; The Only TV Column That Matters™ strongly recommends DVD/Hulu catch-up for the uninitiated. On the other hand, Royal Pains is just a fun no-brainer: New York doctor treats rich socialites summering in the Hamptons; bikinis and mild romantic tension ensue—flufftastic summer TV ahoy!

Series Debut: RJ Berger is a typical high school loser who doesn’t fit in and can’t catch a break—until the day he figures out that he has an enormous dong. Welcome to Hung: The After-School Special. Sure, there’s more to the first scripted MTV series since The Hills than a geek with a throbbing thrillhammer (Random animation! Pop-cultural shout-outs! Valuable Life Lessons!), but not much more. It’s smarter than 95 percent of what the former Music Television produces these days, but The Hard Times of RJ Berger is still just a show about a massive dick—Jersey Shore has it beat there by at least four.

Persons Unknown
Monday, June 7 (NBC)
Series Debut: Remember CBS’ Harper’s Island, a closed-end mystery series that promised a resolution at the end of 13 episodes last spring/summer? And how it ultimately fell flatter than a Viva Laughlin revival campaign? Now NBC wants in on that programming magic: Premiering after the rock-solid lead-in(?!) of Last Comic Standing, Persons Unknown follows seven strangers who’ve been abducted and dropped into an abandoned town as pawns in a sadistic game to be played out as they’re being filmed. Didn’t AMC already remake The Prisoner, like, yesterday? Don’t be sucked in; you still have to get through ABC’s Happy Town.

Nurse Jackie, United States of Tara
Monday, June 7 (Showtime)
Season Finales: As great as Edie Falco is in Nurse Jackie (the most utterly unlikable character on Showtime—even The Tudors’ King Henry VIII, an historical bastard, is more sympathetic), Toni Collette has been blowing her away on the less-critically-hailed United States of Tara this season. While Falco’s Jackie has been coasting on one severely damaged personality—and don’t expect a miraculous changes—Collette’s Tara is now juggling six (Team Shosana!) and counting, and any one of ’em could headline their own series. USoT’s finale sets up a promising Season 3 for 2011 with a revelation from Tara’s parents; Nurse Jackie’s finale just promises more of the same.

Justified
Tuesday, June 8 (FX)
Season Finale: Before Justified premiered in March, I had doubts that former Deadwood player Timothy Olyphant could carry a series; now, I can’t imagine him ever going back to TV sideman status (and I’d rather not even think about Hitman 2 … Jesus). Same goes for ex-Shield cast member Walter Goggins, who was originally supposed to be knocked off in Justified’s pilot but has since become almost as indispensable to this killer Elmore Leonard adaptation as Olyphant’s lawman. Now, small request for next season: Use Natalie Zea!