Plus: The League, Leverage 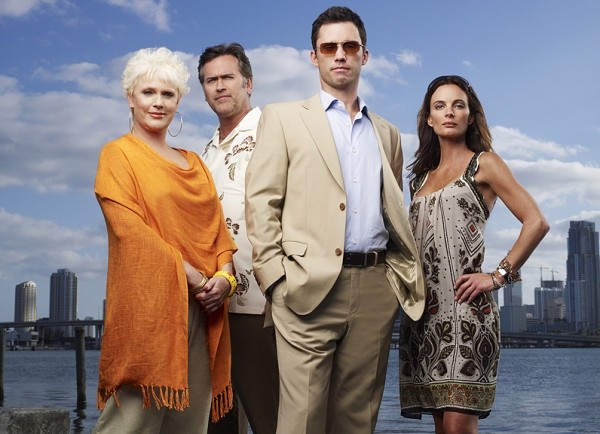 Two-Hour Season Finale: This season of Yelling in Sunglasses finally shut the book on The Man Who Served Michael Westen’s Burn Notice (CIA termination; the show really should have been called Fired Spy), only to throw Mike and the gang into a hotter frying pan: on the run from said agency and now forced to flee the country. Naturally, tonight’s big escape hits a snag or 12—for a group of highly trained international spies, members of Team Westen are captured waaay too often. Still, for all of its repetitive faults (Michael’s endless This is How We Spy It monologues, 98-pound Fiona’s effortless handling of 75-pound guns, Jesse’s continued presence, etc.) and wack plot twists (we get it—everything’s a conspiracy), Season 6 of Burn Notice has been tense, fast and occasionally funny enough to make The Only TV Column That Matters™ look forward to Season 7 … as long as it’s the last one.

Season Finale: Even though some years have been a little weaker than others (that’s you, Season 3), there’s never been an episode of It’s Always Sunny in Philadelphia that failed to crack me up—ever. Suck on that batting average, Seinfeld. The best of the current season’s episodes of Sunny—as with every season—have been written by series creators/stars Charlie Day, Glenn Howerton and Rob McElhenney; tonight’s “Reynolds vs. Reynolds: The Cereal Defense” is one of their babies. Maybe, just maybe, next year’s ninth(!) season will explain how Paddy’s Pub stays in business with no customers, like, ever.

The League
Thursday, Dec. 20 (FX)
Season Finale: Apart from the season-opener, wherein Kevin and Jenny’s newborn baby was unofficially christened Chalupa Batman McArthur (not the weirdest name of 2012), Season 4 of The League has only scored when wildcard character Rafi (semi-regular guest Jason Mantzoukas) hits the field; the rest of the episodes have fumbled too often for a series that looked like a serious challenger to It’s Always Sunny in Philadelphia last season—could be they’re running out of ideas faster than I’m running out of sports metaphors. Fortunately, tonight’s finale is full of Rafi goodness—if the show comes back next year, just put Mantzoukas in the starting lineup (now, I’m spent).

Duck Dynasty
Monday, Dec. 24 (A&E)
Season 2 Marathon: For the first time ever in True TV history (which dates back to the late ’90s or something), City Weekly grand poobah John Saltas has actually turned me on to a TV series, a show I’d previously dismissed as just another redneck-reality pantload—Duck Dynasty! I know, right? All it took was a single scene from Season 1, featuring Si Robertson haranguing a classroom of grade-school kiddies about the horrors of Vietnam. So far, however, I haven’t seen any ducks—is it the same deal as Ghost Hunters and Finding Bigfoot, which are 100 percent ghost- and Bigfoot-free? “Reality” used to mean something, man.

Leverage
Tuesday, Dec. 25 (TNT)
Season Finale: “The Long Goodbye Job” could very well be the series finale, as TNT hasn’t yet picked up Leverage for a sixth season in 2013—the show’s creators have even written it as a story-closer, with the grifter crew taking on bastard people connected to Nate’s son’s death way back in the 2008 premiere episode. C’mon TNT, don’t cancel Leverage before the dream of a three-way Portland-filmed TV crossover event with Grimm and Portlandia is realized.