Plus: Upload, Out There, End of the World 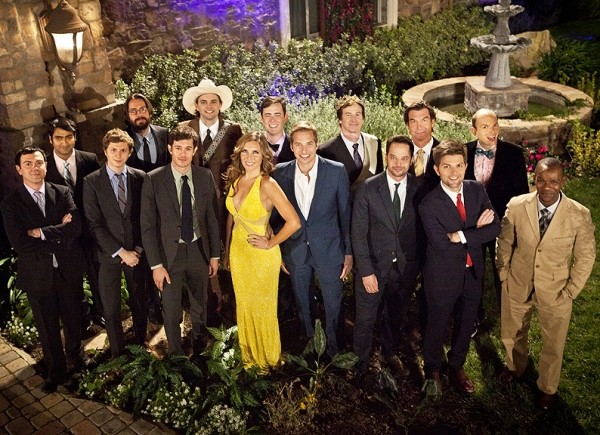 New Season: The sequel to 2012’s online hit Burning Love, the Bachelor spoof that was waaay too long coming, premiered on Valentine’s Day: Burning Love 2 centers on Burning Love’s “damaged goods,” Julie Gristlewhite (June Diane Raphael of Adult Swim’s NTSF:SD:SUV), and her search for the perfect man—after a post-rejection fling as a lesbian, during which she discovered “I’m not gay,” but “if it can happen to Anne Heche, it can happen to anyone.” As over-the-top-of-the-top giddily desperate Raphael plays Julie, she still can’t touch the real crazy of The Bachelorette, and her suitors—including Adam Scott, Jerry O’Connell, Michael Cera, Adam Brody, Colin Hanks, Rob Huebel, Paul Scheer, Nick Kroll, Martin Starr and more—aren’t as restraining-order-worthy as the creeper parade of the source material, but the funny? Burning Love 2 delivers, in 13-minutes spurts.

Series Debut: No, The Only TV Column That Matters™ isn’t going to recuse itself every time a new show from those title-thieving bastards at TruTV premieres—just sayin’, I established the True TV column 10 years before they decided to rebrand Court TV. So … how big of a steaming pantload is Upload With Shaquille O’Neal? Imagine Tosh.0 hosted by Sasquatch in a tracksuit, minus Sasquatch’s shimmering wit. Sure, Internet-clip shows are cheap to produce, but that piddling amount of scratch could be put to far better use. Like, mailing a check to a wronged TV columnist. I also accept PayPal.

Out There
Friday, Feb. 22 (IFC)
Series Debut: IFC sneak-previewed a crude, unfinished sketch demo of the animated Out There in January, and … wha? That was the final product? It’s not going to get any better than crayon-scrawled blobs dashed off by stoners between Del Taco runs? OK then. Out There follows the small-town misadventures of … kids? Werewolves? Crayon-scrawled blobs? Hell if I know. Series creator Ryan Quincy used to work on South Park—not exactly the epicenter of great animation, but at least those blobs are identifiable. Related: Why does Del Taco sound so good right now?

End of the World
Saturday, Feb. 23 (Syfy)
Movie: Here’s a new twist for a Syfy disaster flick: plasma rain! In End of the World (what was wrong with Plasma Rain! as a title?), said space precipitation causes massive power surges, telecommunications outages and more passable CGI explosions than you can shake a Megapython at; naturally, it’s up to a pair of sci-fi fanboys to apply their collective knowledge garnered from running a video store (Google it, kids) toward saving the planet. The “star” here is Greg Grunberg—still wearing that leather jacket from Heroes—who could easily just shield Earth from the plasma rain with his colossal noggin.

Celebrity Wife Swap
Tuesday, Feb. 26 (ABC)
Season Premiere: Continuing its cycle of comedy abuse, ABC is shipping Happy Endings off to Fridays and bringing Celebrity Wife Swap off the bench to save Tuesday nights. The sad, sad thing is, it’ll probably work: The first Wives to be swapped tonight are Kendra Wilkinson (the mentally challenged former Playmate married to sports-employment-challenged Hank Baskett) and Kate Gosselin (the shame-challenged attention ’ho who, it must be noted, is no one’s wife at the moment, nor probably ever again). Come on—you know ’Merica is going to lap up every second of this trainwreck, and this isn’t even the worst/best of ABC’s plans: Next month, Celebrity Diving, now retitled Splash, takes over the night. Oh, Happy Endings, you never stood a chance …