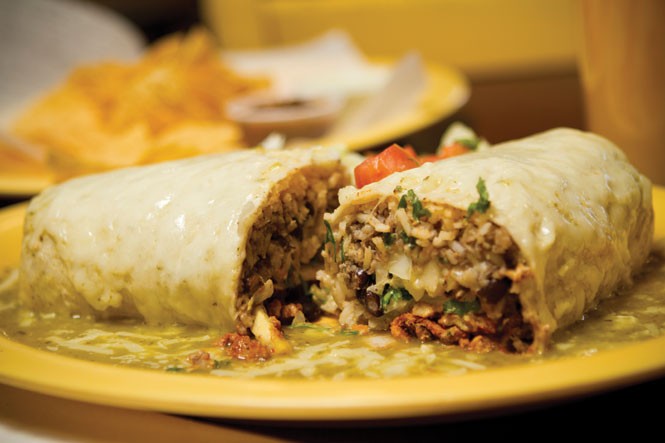 I used to know what a burrito was; now, I'm not so sure. There was a time when I'd order a burrito and be fairly certain of what I'd get: a wheat-flour tortilla rolled into a cylindrical shape and filled with refried beans and/or some sort of meat. It might be topped with cheese, lettuce, sauce or all of the above; it might not. That was a burrito.

Then, someone decided to add rice to burritos. I'm pretty sure this happened in California. More specifically, it happened in San Francisco, where burritos became supersize with the addition of rice and became known as the Mission burrito. Food historians have traced the Mission burrito to a San Francisco Mission District taqueria called La Cumbre. I'll take their word for it. All I know is that I've been eating burritos since 1976, and I'm no longer sure what is a burrito and what isn't. A recent random survey of burrito joints didn't exactly clear the air. It's still as murky as refritos.

My burrito quest began at Freebirds World Burrito (Multiple locations, Freebirds.com), a California-based company that recently opened stores in Sandy, Taylorsville, West Valley City, Sugar House and Kimball Junction. Freebirds proponents are fanatical, in much of the same way that Trader Joe's zealots are; I was told I must get myself to Freebirds, post haste! And so I did.

The Freebirds saga (every franchise must have a saga) goes like this: Two ex-hippies (why ex-hippies, I wondered) in 1987 Santa Barbara rolled some burritos "using fresh-chopped veggies, housemade rice and beans, and, of course, grass-fed beef and all-natural chicken." Really? They were using grass-fed beef and all-natural chicken in 1987? Kudos to Freebirds if that's true, but I have my doubts ...

Anyway, I rolled into the Kimball Junction location (1784 Uinta Way, Park City, 435-649-1777) to find out what all the fuss was about, only to discover something that looked and operated an awful lot like a Chipotle Mexican Grill—not that there's anything wrong with that. It's an assembly-line operation where you choose your tortilla type (spinach, cayenne, flour or wheat) and then a protein. I opted for pork carnitas, along with Spanish rice (eschewing the cilantro-lime version). The basic burrito is rounded out with a choice of beans (refried, whole pinto or black) cheese, lettuce, onions, and dressing or sauce.

The latter is where Freebirds stands out. Customers have a range of saucing options that include ranch, ancho or tomatillo dressings; standard salsa; lime juice; Badass BBQ; mild tomatillo; hot tomatillo; Death Sauce; and habanero sauce, which is itself pretty deathly. I won't bore you with all the details and permutations of my burrito construction, but I will say that I was pretty pleased with my Hybrid burrito (the small size), priced at $6.59. The pork carnitas were better and richer tasting than expected, and I'd happily indulge in another Freebirds burrito sometime—although I don't really need all the backstory and kitschy marketing B.S. that accompanies one.

At Sushi Burrito (180 E. 800 South, Salt Lake City, 801-995-0909, SushiBurritoUtah.com), ontological questions about the basic burrito makeup began to nag at me. Located in the nicely redone space that was formerly home to Guzzi's Vintage Burgers & Fries, Sushi Burrito tests the boundaries of burrito-dom. The concept is a simple one: Take the typical ingredients of a sushi roll and supersize them. The sushi burrito is really neither sushi nor a burrito. It's a sort of Frankenfood. I'd call it a "shwrapito," since it's essentially a wrap-size sushi roll. Thankfully, standard burrito stuffings don't appear in the sushi burrito, nor does a tortilla. I don't think I'd want refried beans or carne asada mingling with my yellowtail.

Sushi Burrito is very popular with a young crowd, and there doesn't seem to be a burrito purist in the bunch. And who can blame them? For under $10, you get a sushi roll/burrito the size of your forearm. If you're looking for subtlety, visit Takashi or Naked Fish. But for big, bodacious, in-your-face sushi rolls, this is the place.

Most of Sushi Burrito's rolls start with a large piece of untoasted, raw nori (seaweed) that serves as a "wrap." Inside are a range of filling options, but most include sushi rice, cucumber, lettuce, avocado and some sort protein: teriyaki beef, tuna, albacore, escolar, salmon, yellowtail and such.

Prepare to get messy, since Sushi Burritos are served burrito-style, not cut into manageable pieces. Mine and my wife's were difficult to eat, and fell apart pretty much from the get-go. Overall, I sort of liked the Cosmo, which included escolar, avocado, cucumber, lettuce, jalapeño, tobiko, lemon, sprouts, ponzu sauce and tempura "crunchies" wrapped in nori. I wasn't fond of the tough lettuce rib, the tough nori or the tough sliced lemon—peel, pith and all—but if a sushi roll that can serve as the biggest meal of the week is your thing, then Sushi Burrito has your number.

At Chunga's (180 S. 900 West, Salt Lake City, 801-953-1840, ChungasMexican.com), I finally bit into something that resembled a burrito as I used to know it. I opted for the al pastor burrito ($7): a large wheat-flour tortilla stuffed with rice, refried beans, onions and quite possibly the best al pastor I've ever tasted. And by the way, it was served on a plate, not as a wrap or a roll. If you've never tried it, al pastor is spit-roasted pork that's marinated in chilies and spices and cooked with pineapple. The result is a heavenly marriage of spicy and sweet flavors that knocks me out. And, judging by the hungry patrons awaiting seats, I'm not the only person to swoon over Chunga's classic al pastor. Now, that's a burrito!