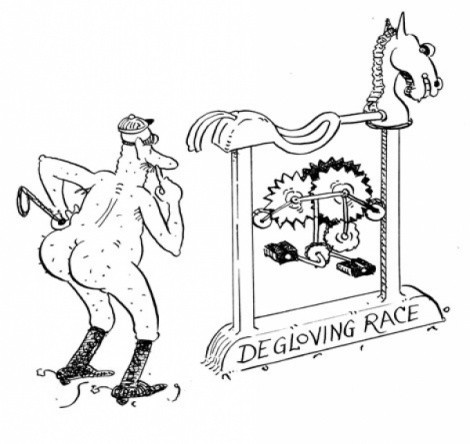 Why does a male feel nauseous, possibly to the point of vomiting, after being struck in the genitals? Is there some sort of gonadal-gastrointestinal connection that the common man doesn’t know about? —John and Sheri, Charlottesville, N.C.

Why do virtually all male terrestrial mammals keep their reproductive organs outside their body, instead of safely inside like a woman’s ovaries? Why didn’t evolution find it safer to keep male gonads inside instead of outside? –DSX

What’s so tough to understand? The male apparatus is outside, the female components are inside. Not to get clinical, but this is a system that works. We’ll get to that. First, let’s answer the more urgent question: Why does a shot to a man’s precious make him want to throw up?

It’s not complicated. You’ve heard the way to a guy’s heart is through his stomach? Turns out the route to his gonads goes through the stomach, too—more precisely, through the cluster of nerves called the celiac plexus, popularly known as the solar plexus.

Here’s how one medical team (Jefferson et al., 1997) describes the situation: “The celiac plexus provides the autonomic nervous supply to the testes as well as to the liver, pancreas, duodenum, gallbladder, and colon. Therefore, testicular pain may result in gastrointestinal symptoms, such as abdominal pain, nausea and vomiting, through reflex stimulation of the celiac ganglion.” In other words, some pain impulses race up to your brain to inform you that you’ve absorbed a jolt to the vitals, while others branch off to the gut and make you feel sick and possibly vomit, in case there was any lingering doubt.

It’s a bit of an overreaction, if you ask me. Serious testicular injury is, thankfully, fairly rare. The testes are flexible and move freely, enabling them to withstand rough treatment. A review of 5,400 reported sports injuries to boys ages 5 to 18 during the 1990s found hundreds of abdominal injuries but zero testicular injuries (Wan et al., 2003).

However, when injuries to the testicles do happen, they’re bad. Three main types of things can happen: blunt trauma, which is what it sounds like; penetrating trauma (gunshots and such); and degloving injury, which may occur when the scrotum is caught in machinery and about which I’ll say no more.

Blunt trauma is what most guys worry about. In the medical literature, we find a typical story involving a 25-year-old man who took a blow to the pelvis during a motorcycle accident. On examination, he was found to have a ruptured testicle, which left unattended can lead to orchiectomy—and that doesn’t mean digging up orchids. Surgeons put everything back together and sewed him up, and after three days he was … well, good as new probably overstates matters. But he was healed enough to go home (Herrera and Coimbra, 2009).

On rarer occasions, impact can result in a condition called testicular torsion—a twisting of one or more of the testes and spermatic cord-which may be accompanied (once again) by intense pain, nausea, and vomiting. Another relatively unusual one is dislocated testes, in which a testicle gets knocked out of the scrotum altogether, potentially winding up anywhere from up by your hips to partway down your thigh. Motorcycle accidents are good for this type of injury too, collision with the gas tank or handlebars commonly being the culprit. Deliberately dislocating the testicles allegedly was a method used by Russian army recruits in the 1800s to avoid military duty, although to me this sounds like Russian roulette—that is, largely a myth. One thing’s for sure: If testicular pain persists for more than an hour, seek medical attention without further delay.

DSX: Not all male land mammals have external testicles. Most of those that do are members of the mammalian subdivision called Boreoeutheria, a large group that includes humans but not, for instance, elephants. The standard explanation for the trait is that the optimal temperature for sperm production is about 5 degrees Fahrenheit cooler than core body temperature. While this may be narrowly true, it’s unsatisfying. Elephants have undescended testicles but reproduce just fine, and as we’ve seen, the external arrangement poses some risk.

The question remains controversial. Some theories:

3. Sperm are kept cool in the testicles to conserve their swimming energy; when they enter the vagina, the temperature jump gives them a temporary power boost for the brief but vital sprint to the egg. This is called the activation hypothesis (Gallup et al., 2009). In other words, the external testicles are the starting gate, the female reproductive tract the racetrack, and successful intercourse the equivalent of ready-set-go. What we call the climax is only the starter’s pistol.