Busy Be the Hiveminded

No pandemic can get in the way of Salt Lake's new hip hop-centric recording studio. 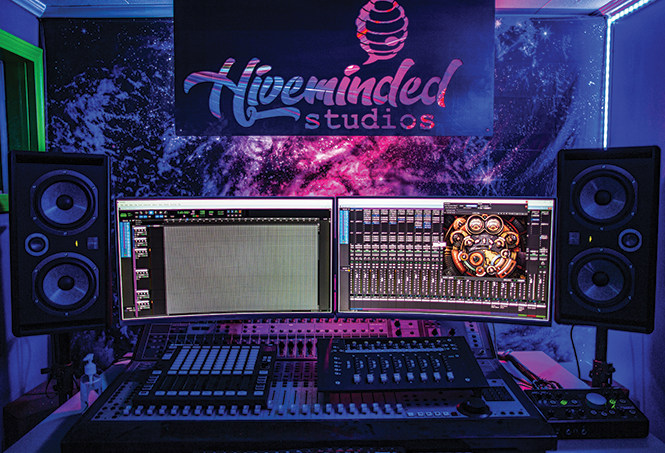 Whether at home or through studios, local artists have kept writing music and recording it through the pandemic. And there's one local studio that's become quite the hub for helping to produce all this new music. Hiveminded Studios was new on the scene to begin with before the pandemic hit, yet despite that newness they've seen success and growth they never anticipated when first endeavoring to start a hip hop studio in Salt Lake City.

Three years ago, co-founder of Hiveminded Studios Dustin Perry was just a guy who wanted to get into more music, more seriously. A drummer who plays casually with a band of friends, he was wanting to make music into something of a career, whether it was offering lessons or offering gig services.

Just as he began to learn to record music for himself, he had a conversation with his cousin, Tristan "Slapfarmer" Axworthy, that changed his course. The Bay Area-based Axworthy had been running a hip hop studio there for about a decade, and had been looking for ways to move on to something new.

"I said, what do you think about coming out here?" Perry recalls asking him. "Initially, we didn't know if we'd be able to really cater to hip hop specifically. That's the majority of what he has experience in."

Though Salt Lake was not known to them (or generally, really) as a "hip hop town," it turned out that as soon as they started offering services as Hiveminded, the huge demand for properly-engineered hip hop music in Salt Lake became all-too-apparent. With Perry handling most administrative duties and Axworthy taking on technical work in their 300 square foot "boutique" studio in a basement apartment in Sugar House, the two have built over the last two-ish years what Perry describes as almost "a community center in a way for people who are like minded—like our name, Hiveminded. Almost completely through word of mouth, we've built our clientele, and we've maintained steady work for just about a year now."

With Axworthy being a mostly-Californian who spent time in Utah as a kid, and Perry being new to the recording industry, the two have been pleasantly surprised by all the great artists they've made connections with at Hiveminded. "We've just run into some immensely talented people that we never thought would be in Salt Lake, for hip hop specifically. A lot of 'em are transplants and about half of the others are born and raised here," Perry says.

Their popularity may have something to do with Axworthy's creds: While in the Bay, he worked with Grammy Award-winning artists like Childish Gambino and Whiz Khalifa. There's also the fact that the Bay, Perry points out, is one of the most diverse places in the world, which leaks into the hip hop made there too. The point is, Axworthy can do it all, Perry notes: "It's one thing to know how to do it, it's another thing to be able to provide an environment that has a proper engineer vibe for people to feel comfortable to create what their uniqueness is, right?"

If you think the pandemic might have held them up, it didn't. Rather, after the initial lurch of March and April of 2020, they saw a boom in business. "We gained three or four clients who had never recorded," Perry says, "had never taken their art seriously but had decided because of the pandemic that they wanted to give it a go. And since then, they've been steadily working at it." One client named Alvi has released three albums, finished a fourth and is working on a fifth, despite just starting with Hiveminded in the spring of last year.

The pandemic also provided the opportunity to do a full-scale production of a Hiveminded cypher—a hip hop tradition of a group of artists taking turns freestyling over the same beat. But the cypher project would quickly find a more serious purpose: Just four days after floating the idea, George Floyd died. "Everything just got flipped upside down on its head," recalls Perry. "I remember a very clear moment when I read Donald Trump's tweet that said 'when the looting starts, the shooting starts,' and that really just sparked a fire in me."

The cypher became an opportunity for a core group of Hiveminded clients to develop socially-conscious raps, about Black Lives Matter and other issues. The pandemic's waylaying of all sorts of creatives, including those in film and production, also made it possible for talented industry friends of Perry and Axworthy to come out to Utah, to create a three-part video series for the cypher. A full-scale production commenced out on the Salt Flats, highlighting locals including LaneCobain3, Osiris801, T. James, APaulloN9X, Blacc E, Unknown The Real Da Vinci, Alvi, Nia and King Ronin Da Scholar. The videos were released in parts through late summer 2020 as "The Reckoning," and are up on the hivemindedstudios.com.

"There, and at @hiveminded studios on Instagram, you can keep up with the growing creative hub as they work on a compilation of local artists, for release in February. That, and as Perry puts it lightly, "staying out of our own way so we don't mess this up!"