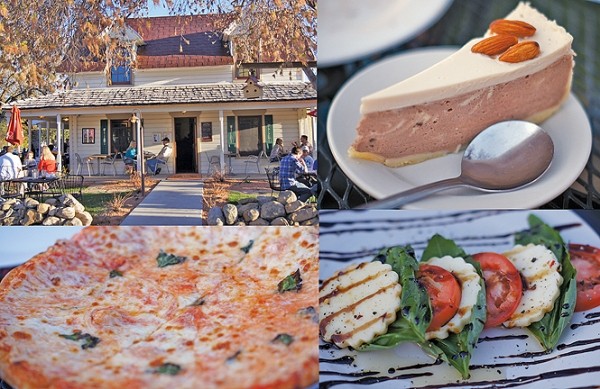 During a recent getaway to the Heber Valley—an escape to Zermatt Resort—I encountered some Midway magic at a marvelous little restaurant called Café Galleria. Located on Midway’s main drag, the eatery wasn’t easy to miss. There’s a brightly colored yellow & purple buggy out front advertising the place, and on a Friday evening the cafe was absolutely bustling with happy customers, inside and out.

Café Galleria is situated in and around a 110-year-old house; there’s abundant seating indoors, and lots more outside. Patio tables and furniture surround the house, and in warm weather patrons can eat, literally, on the lawn. There’s also a small bandstand set up in one corner of the yard for live music. Inside, there’s photographic art—pictures from Italy—by Lance Duvall, the owner’s son, along with Heber City Cowboy Poetry posters. It feels like being in Boulder or Portland.

The centerpiece of the cafe, however, is a very small kitchen that produces big flavors—mostly from an imported Italian wood-burning oven. That’s where the magic happens.

The menu is constructed, principally, around two terrific items: wood-fired pizzas and bagels. Bagels? Yep, bagels. More about those later.

As many of you know, I’m on a never-ending quest to seek out perfect pizzas. However, I never thought my mission would take me to Midway. Well, my pizza-loving friends, I’m happy to report that Café Galleria pizza is well worth traveling to Midway for—it’s some of the best pizza I’ve ever tasted, in fact.

These are traditional, thin-crust, Italian-style pies, baked in a wood-fired oven (they use cherry wood) at around 600 to 650 degrees Fahrenheit. Think Settebello. Think Vinto. Think Sea Salt. Think Zucca. Except don’t, because these pizzas aren’t quite the same as you find at those eateries. Yes, the sauce is made from San Marzano tomatoes, as it should be. And, yes, the dough is made using 00 Caputo flour, from Italy. The difference in Café Galleria’s pizza is the cheese. I was stunned at the rich flavors of the cheese on the pizza, until I learned that the owner, Cecil Duvall, is also a founding partner of the award-winning artisan cheese producers: Gold Creek Farms, located near Kamas. It was all starting to add up ...

Duvall has a small cheese-making setup in the back of the house, where he makes everything from fresh mozzarella and ricotta to Parmesan and goat cheese. So, when you order the Caprese appetizer ($6.99 small/$8.99 large), you’ll get rounds of freshly made mozzarella, slices of vine-ripened red tomatoes, fresh basil leaves and a plate drizzled with olive oil and balsamic vinegar. It’s a gorgeous presentation. I suspect Jim Norton—who was a chef at Deer Valley Resort for 11 years, and now cooks a few nights each week at Café Galleria—might have something to do with the composition of this appetizer and salads like the artichoke & roasted-mushroom salad ($5.99 small/$7.99 large), which are as lovely to look at as they are to eat. The latter is a colorful mélange of mixed greens tossed with artichoke hearts, roasted mushrooms, cherry tomatoes, Kalamata olives and toasted pine nuts and drizzled with balsamic vinaigrette. One of the bargains here is a personal 6-inch Margherita pizza plus a house salad, for a mere $7.95—especially given that a small house salad alone is priced normally at $5.99.

Let’s talk pizza. I’ve seen some negative online reviews of Café Galleria pizzas, mostly along the lines of, “Where’s the cheese?” Well, this isn’t the style of pizza you’d find, for example, at The Pie. It’s much closer to Associazione Vera Pizza Napoletana-type pizzas: traditional, thin-crust pies of the sort you’d find in Naples, ones that aren’t loaded down with cheese. Having said that, I’m not certain that Café Galleria pizza would past the muster of Vera Pizza. There is more cheese on these pies than you’d normally find on a Napoli pizza, and it’s not fresh buffalo mozzarella. Do I care? Nope. Because the mixture of housemade mozzarella and Parmesan that Duvall tops his pies with is so decadently delicious it seems like it ought to be a controlled substance. The 12-inch crust is perfect: just slightly crisp and crunchy, with small bits of wonderful burnt cheese on the edges. The simple, straightforward San Marzano sauce also gets an A+. And then, the pie—we’re talking about a Margherita pizza here ($6.95)—is graced with a few leaves of fresh basil. That’s it: pizza perfection. Yes, there are a wide variety of pizza toppings, from cotto and arugula to roasted eggplant and even pineapple. But why screw up something as perfect as a magnificent Margherita?

Now, about those bagels. The cafe is open at 7 a.m. daily for breakfast and specializes, at that early hour, in freshly baked bagels and bagel sandwiches. Duvall is quick to point out, however, that these are not New York-style bagels, but rather what’s known as a Montreal bagel. For those not in the know, a Montreal bagel is boiled first but then baked in the wood-fired oven. The result is a bagel that’s a bit denser and a little sweeter than a New York-style bagel, with a crisp crust. There’s a variety of bagel options ($1.50), including plain, Asiago, cinnamon-raisin and, my favorite, poppy-seed.

The bagels are terrific by themselves or with fresh-made spreads, but I really like the bagel sandwiches. The ham, fried egg & Swiss cheese bagel sandwich ($5.45) provided a hearty foundation for a morning Midway bicycle ride.

Two more don’t-miss items: large housemade meatballs ($3.95 for two) in from-scratch tomato sauce are superb, and the housemade cheesecake is absolutely killer. And that’s coming from someone who doesn’t even normally like cheesecake. Need further enticement to visit? Café Galleria also has a nifty little wine and beer selection. I may have to move to Midway.