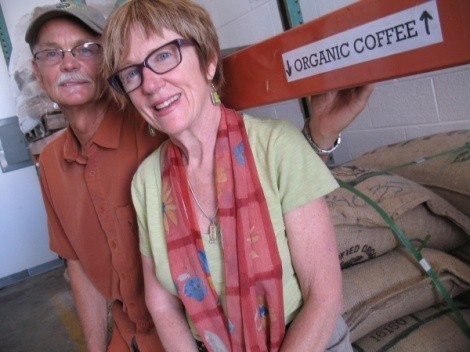 Co-owners and spouses Randy Wirth and Sally Sears call themselves dyed-in-the-wool hippies/environmentalists. When the ’60s and ’70s environmental movement reached Logan, “We were it,” Sears says as we tour the roasting facility. That ethic has stayed true, clear through December 2011, which marked the business’s 35-year anniversary.

The couple wanted to create something more tangible than protesting, so they opened the Straw Ibis Herb & Grain Company. “We have always tried to give people what was lacking—like balsamic vinegar. Can you believe that? You just couldn’t find it here,” Sears says with a laugh. A few years later, they opened Caffe Ibis Gallery Deli and coffee shop. “But it was apparent by the late ’80s that we needed to focus on coffee,” Wirth adds.

They were encouraged to focus on specialty coffee and, after Wirth took some roasting classes, decided to roast their own, starting with 5-pound batches on weekends. “We were overwhelming the historic district with all of our roasting—the smell of it,” he says.

Their current facility, located several miles away, is a sophisticated operation.The Sunday we toured it, the machinery was dormant, with meticulously sorted-for-quality beans waiting to be roasted to a deeper hue.

The beans and ground coffee are sold nationally at grocery stores and coffee shops. Every bag is triple-certified: organic, fair trade and shade-grown. Wirth says they were the first in the United States to receive all three, and this triple-certification is still the pillar of their business. And the coffee stands up to it; I don’t think there’s a better roast in the country, let alone Utah.