Local ingredients are the foundation of Caffe Niche cooking 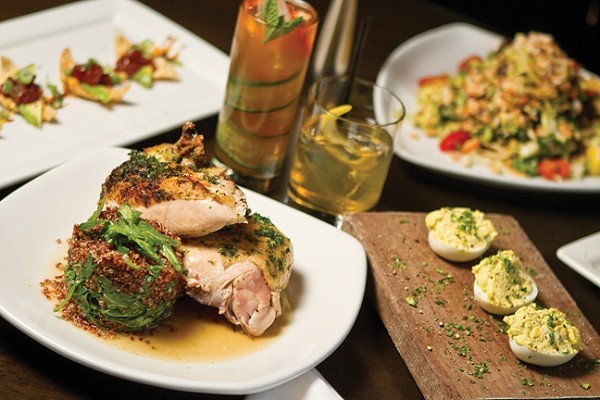 One of the benefits of having Alexa at Dexterity Salon cut my hair is that it provides me with a convenient excuse to grab some grub at Caffe Niche, which is adjacent to the salon. I’ll probably slim down a bit when Dexterity moves into its new location on 300 South downtown. I don’t know what will replace Dexterity, but I hope its move won’t negatively affect business at Caffe Niche, because the eatery seems to be just hitting its stride.

Caffe Niche has evolved over the years, beginning as a limited-menu breakfast and lunch spot, then expanding to offer dinner on weekends and finally, to where it is now: You can enjoy breakfast, lunch and dinner seven days a week, along with brunch on Saturday and Sunday.

The missing piece of the Caffe Niche puzzle might have been Joel LaSalle, whose LaSalle Group partnered with Niche’s chef, Ethan Lappé, a few months ago. The LaSalle Group also owns Oasis Cafe, Faustina and Kyoto Japanese Restaurant, but its footprint is light, not interfering too much in the day-to-day operations and menus. The LaSalle Group restaurants are anything but cookie-cutter, and Caffe Niche remains unique and inviting, with its comfy, clean décor and uncluttered food to match.

As Caffe Niche has evolved, I have really come to enjoy chef/owner Lappé’s cooking. He’s a graduate of the much-lauded Culinary Institute of America in Napa, but he doesn’t wear his big-time credentials on his sleeve. His food, much like the man himself, is very approachable—down-to-earth cuisine that is creative but not contrived. That shouldn’t come as a surprise given that Lappé’s aunt is food activist and Diet for a Small Planet author Frances Moore Lappé who Ethan says “deeply influenced” his relationship with food and the culinary arts.

Which brings me to the artichoke. You wouldn’t think that something as simple and satisfying as an artichoke would be so damned difficult to find in restaurants, but it is. Kudos to Lappé, then, for giving customers the opportunity to enjoy the most basic of culinary pleasures: a roasted whole artichoke ($7). It’s beautifully browned, cut in half and served on a plate drizzled with olive oil, dusted with minced parsley and black pepper, and comes with housemade aioli for dipping. Simple, yet sensational. The same can be said for sushi-grade raw tuna in the form of poke tartare: chunks of bright-red tuna in a light sesame dressing atop avocado wedges, sprinkled with black and white sesame seeds and accompanied by crispy fried wonton skins ($10). Other temptations from the “small plates” portion of the Caffe Niche menu range from retro deviled local eggs ($3) and warm potato salad with peas, bacon, corn and citrus aioli on Idaho banana fingerlings ($6) to an exquisite porcini-dusted sea scallop, seared and served with black Beluga lentils and crunchy pancetta ($9).

As with all of the LaSalle Group restaurants, a premium is put on the use of local products at Caffe Niche. The artichokes are from Sevillo Fine Foods in Midvale, Provo’s Pleasant Creek Ranch provides Wagyu beef, much of the produce is grown at Eden’s Sandhill Farms, elk meat for the bodacious elk burger is from Ashton Farms in Fillmore, and baking flour is milled at Lehi Roller Mills. Numerous other local providers are represented on the menu and, with the exception of scallops and salmon, there’s not much that isn’t from Utah or its neighboring states of Idaho and Wyoming. Aunt Lappé would approve.

Service at Caffe Niche is as friendly as it is professional, and I was particularly impressed and thankful for a server named Venice, whose versatility and helpfulness in customizing a couple of dishes allowed me to trade out braised greens for shaved Brussels sprouts with my pan-fried, panko-breaded halibut, which also came with black-eyed peas and remoulade ($24). At lunchtime, you can’t go wrong with the house-braised Snake River Farms Kobe-style corned beef sandwich ($12); it’s killer.

On the eve of a recent trip to Sonoma, I had no time to cook dinner, and stopped by Caffe Niche for some takeout food. It turns out that this is not so unusual; there were other folks awaiting takeout meals. I’ve written before that the best way to judge a restaurant is by its roasted chicken; if a chef can’t properly cook a chicken, there’s not much reason to venture any deeper into the menu. And I’m happy to report that the roast half-chicken ($16) of Lappé’s that I ordered for takeout is a lesson in roasting perfection. I drooled all the way home, the inviting aromas of the chicken wafting from the back seat of my car. The organic chicken was perfectly cooked, with crispy skin and tender, juicy meat marinated in herb, garlic and lemon gremolata, and came with a delicious warm salad of red quinoa and arugula.

When you visit Caffe Niche, make time to belly up to the bar and have mixologist Chris Bradshaw whip up a classic cocktail like the Pimm’s Cup or Sazerac. Then, prepare to be delighted by Lappé’s understated but excellent cuisine.