Who first figured out how to make coffee? 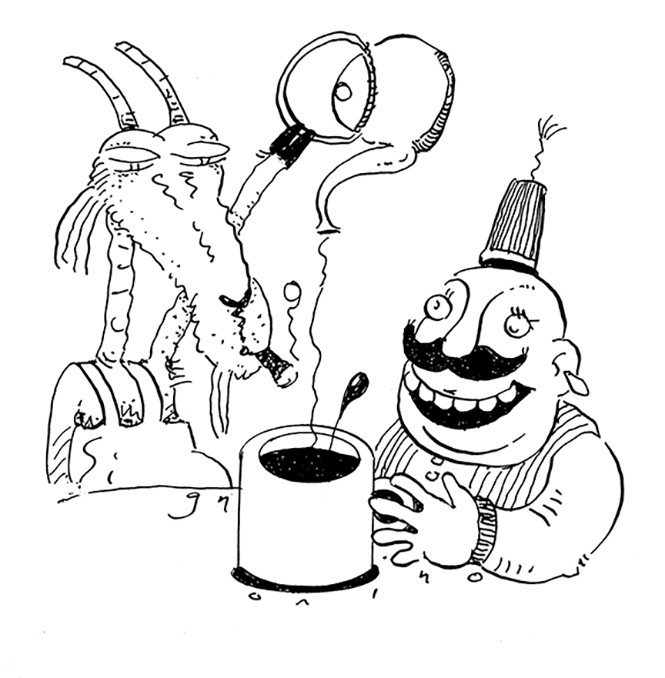 Coffee: let's grow this plant, pick the berries, take the seeds out, roast and then grind the beans, pour hot water through the grounds, and throw the beans away. Drink the water! How did we get there? —Old Blue Eyes

Remember Solomon, OBE? Wise and just, son of David, king of Israel, etc? He's who did it, according to one 17th-century Arab writer. The story goes that Solomon encountered a plague-struck village and was counseled by the angel Gabriel to roast coffee beans—anticipating the single-origin craze, Gabriel specified beans sourced from Yemen—and soak them in hot water. He gave the resulting beverage to the villagers, curing them. Despite coffee's proven miraculous qualities, this version of history has it then falling off everyone's radars for a couple millennia, till about the 16th century.

OK, maybe not the most convincing. But Yemen and the 16th century, or thereabouts, are where coffee actually begins to show up in the (non-scriptural) record. We pause to note, first, that these folks certainly weren't the first to come up with the idea of immersing vegetable matter in water and consuming the results. I'd propose that's just one of those things humans wind up thinking of over time, if only because they're bored; when the coffee craze first swept the Gulf of Aden, the Chinese had been brewing tea for centuries. You could similarly look at the practice of grinding grain, adding water, and exposing the resulting dough to heat—i.e., making bread, which I wrote about back in July. An unlikely process at first glance, but if you've got a sheaf of wheat and a need for nutrition, you'll figure it out eventually.

Coffee is nutritionally useless, though—what need could it have been filling? This is where the era and locale come into play: some convincing histories place coffee's emergence in Yemeni communities of Sufis, members of a Muslim sect, who allegedly discovered that drinking it helped them stay awake during long religious ceremonies. There are a number of competing stories here and no small amount of lore, but if you squint hard enough you can see the rough outline of a narrative: coffee trees grow wild in this part of the world; somebody decided to see how their seeds tasted and realized that, taste notwithstanding, they make you feel good; thus are caffeine addictions born. It probably didn't hurt that this was a region famous for the stimulant khat, which are leaves people chew on; there pre-existed a local enthusiasm for getting a buzz off plants.

Various of these stories are laid out in the 1985 book Coffee and Coffeehouses: The Origins of a Social Beverage in the Medieval Near East, by historian Ralph Hattox. Hattox doesn't even mention the first tale you'll likely come across if you do any searching: one about an Ethiopian goatherd named Kaldi, who observed his flock becoming particularly animated after nibbling on a certain bush. After trying it himself, Kaldi shared his find with a local imam, who dried the beans and took to steeping them in hot water whenever he needed to pull an all-nighter down at the mosque.

Apocryphal for sure, but the accounts Hattox does relate support the idea of coffee being an agrarian discovery embraced by Sufi Muslims; he finds one story, for instance, of a notable Yemeni Sufi known as al-Dhabhani, who sometime in the 1400s traveled to Ethiopia and, there discovering coffee, brought some back to Aden and shared it with his co-religionists. This story also contains "more than a bit of legend," Hattox concedes, and is complicated even by the language employed: Dhabhani is said to have encountered people in Ethiopia "using" (i.e., not "drinking") what the 16th-century writer recounting these events called qahwa, leaving it unclear whether they were brewing it or chewing on it, a la khat. Evidence on the side of brewing is provided by the word qahwa itself, a term that previously had sometimes referred to wine, another mood-altering drink.

Still, that or something like it is about as close as we're going to get: though we don't know the play-by-play, we know roughly where coffee drinking caught on (Yemen, perhaps running with an Ethiopian concept) and when (the mid-15th century), as well as the religious tradition that midwifed it. A little note on that: In Yemen, the drink ran into early contention over whether it was even acceptable by the standards of the Quran. The prophet Muhammad, you'll recall, forbade his followers from getting intoxicated, and when coffee made its way to Mecca, in the early 1500s, it sparked a debate: was caffeine an intoxicant? In 1511 a local religious leader "literally put coffee on trial," writes Tom Standage in A History of the World in 6 Glasses (2005): "He convened a council of legal experts and placed the accused—a large vessel of coffee—before them."

After talking it over they decided coffee was indeed an intoxicant, and therefore haram, and the drink was banned—burned in the streets, Standage reports, its vendors beaten. Within months, though, a higher council overturned the ruling. Apparently cooler heads had prevailed in the interim; maybe everyone switched to decaf.