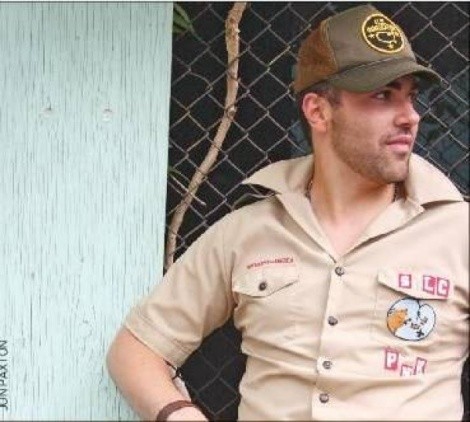 Cameron Rafati’s new album opens with pulsing piano and gutsy guitar—immediately proving itself to be one of the better releases in the state this year. Producer Scott Wiley (Paul Jacobsen & The Madison Arm) let local boy Rafati explore his keyboard, his vocal range and some real—yes, real—strings on Rafati’s self-titled LP. Rafati’s life recently underwent a big transition as he boxed up his realtor suit and unearthed his vocal mic. Things changed even more drastically when his mother suffered a stroke.

“Speaking to different people in the hospital, it seems during the last six months there’s been more trouble people are having from the economy. People are having a lot more strokes, ODs. And I thought it might be cool to do this for a good cause,” Rafati says, explaining why he teamed up with the Utah Food Bank for his album-release show—all proceeds from the door going to the local charity, and free discs are available for a $5 donation.

Five visual artists, including PJ Mannion and Zachary Proctor, plus opener Glanis, will be displaying their work at Pierpont Place as Rafati performs new tracks—one in particular placing a few Salt Lake City residents in a foul mood: specifically, the sixth song “Salt Lake City,” which he loves for its effect on audiences. It is a growling ode to the area that begins, “I’m sick of this town / I’m sick of this city / The folks got me down.”

Before getting too territorial, take note: “I play that song for everybody, and they all get depressed. But the whole point of that song is to talk about these problems in a very satirical way, to blow off some steam,” Rafati smiles to clear the confusion. “People move all over the world, but Salt Lake is still their home; it’s in a special place in their heart. The quality of life here is some of the best in the world.” Though he has been spending time in California recently to work on his career and album, Rafati still knows where his heart resides. “L.A. sucks compared to this town. There’s so much better stuff out here.”