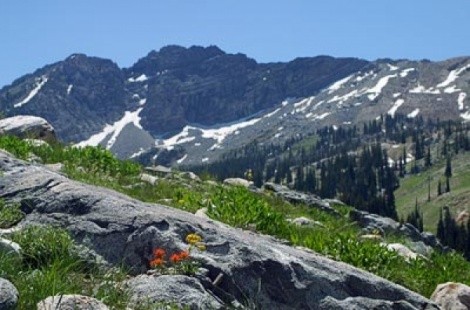 A peek into the crystal ball for Salt Lake County’s canyons may reveal more than ski resorts and wilderness. Closed roads with shuttle service during the canyons peak traffic seasons, aerial cables connecting ski parks into one giant, uber resort or perhaps even a narrow gauge railroad chugging it’s way up Little Cottonwood Canyon, a little engine that could…cost taxpayers hundreds of millions.

As county planners and Envision Utah will say, right now the outcome is uncertain. That’s because these proposals are still fresh from the initial round of public workshops about revising Salt Lake County’s 1989 canyons master plan. Planners have culled input from last spring’s workshops into a number of scenarios, which will be presented in further public meetings in October. While these scenarios run the gamut of development policy to watershed policy, Epperson says he can speak of the transportation scenarios specific to Big and Little Cottonwood Canyons which have solidified.

The five scenarios Epperson details range from simple plans to expand bus service to a year-round schedule to perhaps closing off roads during peak seasons and allowing only shuttles to carry traffic through, a la Zion National Park. “Unless you lived and owned property up there you would have to take a shuttle from some kind of visitor’s center,” Epperson says. “We would actually be looking at a Trax extension off the Sandy line to go up the east bench to provide access to the visitors’ center.”

Another scenario would be a possible $5 fee for canyon visitors who use their car, with a special pass for canyon residents, a measure meant to curb vehicles in the canyons and encourage carpooling. Epperson estimates with roughly 4,000 visitors a day using Big Cottonwood Canyon, a $5 per vehicle charge could possibly generate $1.2 million a year in revenue to support the canyons, assuming the charge doesn’t discourage visitors.

Other possible scenarios will mean taxpayer debt rather than payoff, especially the idea of a narrow gauge railroad. “[One] scenario is putting in a mountain railway system up Little Cottonwood Canyon,” Epperson says. “This is a narrow gauge rail system that is currently sort-of common in Europe.” At an estimated $20-$50 million cost per mile of track laid, the total damage could be as low as $100 million and as high as $300 million.

Compared to the railroad system, another scenario, that proposes to construct aerial cables to various ski resorts into a giant park, would (according to 1996 estimates) run taxpayers roughly $40 million. The idea is the one that perhaps divides major stakeholders the most.

“A lot of this was actually studied by the Utah Sports Authorities back in the ‘80s,” says Dr. Kevin Tolton, a landowner in the canyons who was also a recent Alta mayoral candidate. “But Salt Lake City went and stopped it, and you’re going to find the same folks go after it this time. These ‘wilderness’ folks are just trying to have the Feds take over our lands.”

Tolton says interconnecting resorts would create a “marketing Mecca” for possibly the largest ski resort in America. It would also relieve transit pressure. “[Visitors] want to ski all the resorts,” Tolton says. “They say ‘I’m gonna try Park City and Deer Valley and then I’m gonna drive to Snowbird and then I’m gonna drive to Snow basin’—if you want to minimize gas and car expenditures, then interconnect the resorts.”

The “mega resort,” says Save Our Canyon’s Director Carl Fisher, would adversely impact the watershed and close off land for hikers and wildlife viewers. It would also not effectively relieve traffic in the canyons, since the traffic situation is a year-round problem.

“We just feel that any addition of ski lifts would just be for ski resorts and not be a viable transit alternative,” Fisher says. “Something the public would pay for and the ski resorts would benefit off. But then again it’s important to take a lot of different things into consideration.”

With old battle lines being redrawn many advocates will be ready to take the “considerations” up a notch at the October meetings. For more on Envision Utah’s project visit their website.