Showing Backbone: Jimmy Newquist of Caroline’s Spine has no trouble keeping up with the times. 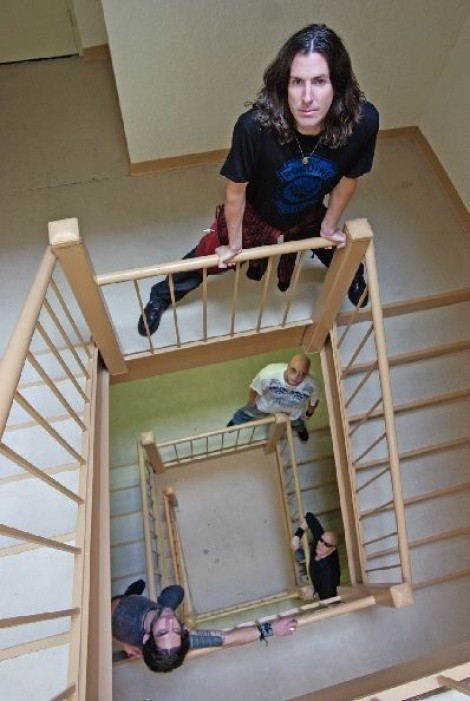 Caroline’s Spine cuts a familiar figure on Salt Lake City stages. Jimmy Newquist’s musical hard-rock combo is a longtime favorite at local clubs, going back to the mid-’90s. Their appeal goes beyond the music, with members employing good old-fashioned backbone and work ethic to “make it” in a fickle industry.

Caroline’s Spine’s self-titled debut established Newquist as a songwriting force. He also played nearly all of the instruments on that Anza Records release.

“It was a very cool process I don’t plan on repeating,” he quips. Producing plugged-in renditions of Newquist’s acoustic songs has been a formula that’s proven itself over a decade-and-a-half for the musician.

Not that his music is formulaic. Songs like “Why Don’t We Get Along” and “I Will Be Alright” pair highly personal lyrics with catchy, powerful melodies to fuel fun live shows.

After three albums for Anza, Newquist and the other musicians who by this time comprised the “Spine” had built up enough momentum that they got signed by major label Hollywood Records in the late ’90s, released two albums—Monsoon and Attention Please—and toured with Aerosmith and Kiss. It was the last of the heyday of the major label monarchies, but the experience of working with master producers Roy Thomas Baker (Aerosmith, Pearl Jam), Nick Didia (Neil Young, Bruce Springsteen, Stone Temple Pilots) and Eric Taylor proved invaluable.

In addition to his songwriting savvy, Newquist was smart enough to cut ties with Hollywood in 2000, later starting his own label, 7thkidinc—a nod to his place in a family of eight children. 7thkidinc is a vehicle for his own work, as well as that of documentary filmmakers. His entrepreneurial skills helped the band navigate the major-label rapids and adapt to the landscape afterward, using new media to engage with new audiences.

Caroline’s Spine didn’t sleep through MySpace, but used it to help popularize their 10th studio album, Work It Out (2008). While the band has sold more than 1 million units collectively, Newquist seems more excited about the fact that the single “The Light Inside” is their second-most-downloaded hit to date.

Work It Out doesn’t necessarily represent a new direction for the group so much as a refined approach. It’s also one of their strongest collections, “The Light Inside“ just hinting at the self-assuredness that has grown since Newquist’s initial songs to an impressive body of work true to his original inspirations. “I think our following has always been the same,” he maintains, and a sizeable portion of that fan base resides here in the Beehive State. “People in Utah know what Caroline’s Spine is all about.”

After their live gigs, the band heads straight to a recording studio outside Phoenix to record three new songs, the next chapter in the Caroline’s Spine story, followed by 40 or 50 additional dates. Newquist anticipates that “2010 is going to be a much busier year than I thought.”