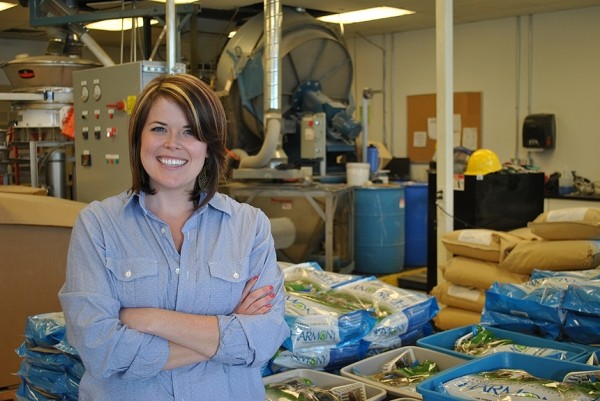 A Westminster grad and a cat owner, Jessica McKelvie is also a process chemist for local cat-litter company Purr-fect Solutions. The litter, launched in late 2013, is made with a fly ash, a waste product of coal combustion that’s similar in feel to traditional clay litter; seaweed and other materials are added to make the litter clump and control odor. Purr-fect Harmony litter (Purr-fectHarmony.com) is now in 33 locations in six states.

How was cat litter born out of a coal-burning byproduct?
Purr-fect Solutions has been around for two years. Before that, we were a research team at a company called Ceramatec. Chet, who’s the general manager here, won a grant to do research on fly ash and find out other beneficial reuses because so much of it is being landfilled. He hired me on as a chemist, and we worked diligently finding all of these different uses. We all have cats at home, and we’d had all these conversations about how we wanted an alternative to clay because it’s terrible for the environment, and that kind of brought up this idea of using fly ash for cat litter. There were a couple years of research, and we got a couple of patents out of it, and then an investor was interested in the product, and he funded us to build this plant.

There’s two major industries when it comes to coal—the power-generation side, producing electricity. And then out of that, there’s this fly-ash business, where people are buying and selling ash from different plants. They kind of have competing ideals sometimes, because the fly-ash people are like, “If you produce fly ash that looks and feels and does this and has this chemistry, then we can sell it more.” And meanwhile, the people who are operating the boilers are like, “I’m not intentionally producing this product—I’m making power.”

Is it better or worse than other cat litters?
We noticed when we started researching fly ash that it had a similar makeup to clay, which is usually used at cat litter. Clay is the gold standard for cat litter—it absorbs, it clumps, it controls odor. But one major bad thing about clay litter is it’s strip-mined—2 million tons of clay is strip-mined in the U.S. each year just for use as pet litter. And every ton of clay that you remove from the earth, it takes 4 tons of overburden out before you can recover the clay. Although great for your home, it’s not so friendly for the environment—which is why there’s all those natural pet litters out there now. What we want to do is be in the middle. You’ve got your clay, which works well but is crappy for the earth, and you’ve got your naturals, which are great for the earth but are terrible with performance—they kick everywhere, they don’t smell as good, they don’t control ammonia. But people are willing to sacrifice that performance to get that green option. We hope to offer cat litter that’s environmentally friendly—made with 85 percent recycled material—but since its makeup is like clay, it performs more like clay.

How can it be good for the environment if it’s from coal?
It was a material already intended for the landfill that we’re diverting for another purpose before it gets there. Coal power is going to be around for a while—it’s just inevitable. In the U.S., we have a lot of standards for collecting coal ash. Unfortunately, most of it’s landfilled. About 40 percent of it is reused as cement in concrete, or in other products—carpet backing, they’ve tried toothpaste. A lot of the building they’re doing in China, they’re actually shipping fly ash from the U.S. to China to help with the building, as a replacement for cement.


In the coal-combustion process, we’ve worked so diligently in the U.S. to produce boilers that are efficient, so we’re removing as much carbon material as possible while we’re burning it to get energy out of it. Over there, they’re not quite up on the technology as we are, so they have such a high carbon content in the ash at the end of the day that it competes with the cement-ish qualities. You have to have a certain quality of ash to use it as cement, so a lot of the ash that they produce over there is not a high enough quality to use as a recyclable material.

We are really particular about the sourcing of our product for that reason—we want it to be a really good product that’s going to be the safest for the cats on the receiving end. We get it from one source, and we monitor it every single time.

When did you decide to become a chemist?
Probably high school or before. I was always encouraged to pursue that—my father is an engineer, so I never had that whole, “you’re a female in math and science?!” I never experienced that. I was always testing things and mixing things as I grew up. And through my time at Westminster, it was obvious that I needed to do chemistry and research. And then you come to find out that that’s not the typical experience—many women don’t experience that encouragement to go into math and science and engineering. So I have to do a kind of check on myself, and think, “Well, how can I pass that encouragement down to the next generation?”

What are Purr-fect Solutions’ goals?
We also want to be a sustainable business. We joined the Salt Lake City E2 Business Program. We gather with other E2 businesses and make yearly goals for how to make our company’s process more sustainable. What’s nice about it is it’s an external agency that helps encourage you and provide resources and challenge you to be better. The Salt Lake City E2 Business Program came in and did an assessment of our business.

One of our goals is to not have any waste. The dust that we don’t want in our product, we don’t want to throw them out, even though it was intended for the landfill in the first place. So we’re trying to find other uses, or give them to other companies for use in sandbags and oil dry. And nationally, we’re part of the Green Business Network.