Is there any benefit to the “Paleolithic diet”? 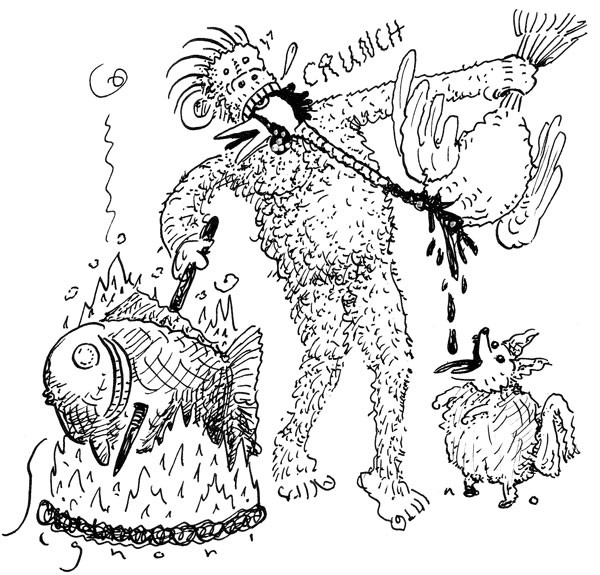 I’ve been scouring the web for healthy recipes, and one term I keep coming across is “Paleolithic diet.” I don’t understand how a caveman’s diet was better than modern man’s just because of the absence of grain and gluten. What exactly is a Paleolithic diet? Aside from being gluten-free, is there any benefit to going paleo? —Sarah

Having a fair idea what I’d find, I Googled “Paleolithic diet skeptic” and found comments such as the following: “The ideas behind this diet are ... moronic and must be mocked with the fury of a thousand suns.” That pretty much sums up my gut response. However, we can’t just go around saying things are stupid. We must calmly and systematically examine the claims, and then we can say they’re stupid. So let’s get on with it, starting with the obvious counterargument:

How can anyone possibly claim a Paleolithic diet is better than ours, when the average cave person didn’t live much longer than 30?

Average life expectancies for past eras can be deceptive. Until 1900 or so they were low, but that’s mostly because of high infant and childhood mortality. Modern hunter-gatherers who survive to age 15 typically live into their 50s and often well beyond; it’s reasonable to suppose people in Paleolithic times did the same.

No one doubts people in the developed world live longer now than they used to because of modern medicine, good sanitation and so on. But it’s also obvious that were it not for our crappy eating habits (I’m thinking of high-fat diets and over-consumption in general), we’d live longer still. The Paleolithic spin on this line of argument goes like this: benefits of modern civilization – modern bad habits + paleo diet = better life, although better how is a little vague.

The value of eliminating bad habits I’ll buy. The question is whether a specifically paleo diet (lots of meat, no grains or dairy) is better than the currently recommended food-pyramid diet (lots of grains, moderate meat and dairy).

Is paleo the same as gluten-free?

There’s a lot of overlap, but these are two different fads.

What’s a paleo diet supposed to do?

I’m getting to that. The Paleolithic diet is an outgrowth of evolutionary medicine—examining how we evolved to guide our health care and diet. The concept was introduced by a gastroenterologist in 1975 and gained popularity after a report in the New England Journal of Medicine 10 years later.

Paleo advocates claim our current eating habits are responsible for “diseases of civilization” such as cardiovascular problems, diabetes, prostate and colon cancers, obesity, etc. Their premise is that the Paleolithic period was a time of rapid human evolution, lasting from about 2.5 million years ago to roughly 10,000 years ago—in other words, from the development of stone tools to the beginning of agriculture.

At that point, proponents claim, human evolution essentially ceased. Therefore—and here the argument starts to get shaky—we should return to the diet our bodies evolved to eat.

We don’t really know what Paleolithic peoples ate. No caveman cookbooks are extant. Paleo proponents say our stone-age ancestors subsisted mostly on game, fish, insects, eggs, fruit and berries, vegetables, and nuts. Dairy products, sugars, raw fats, seeds, and legumes were rarely if ever eaten. Fiber content and omega-3 fat would have been high, sodium intake low. Water was the only beverage—coffee, tea and Diet Coke were millennia in the future.

Granted, that seems healthy. A low-saturated-fat, low-glycemic-index diet high in fiber, vitamins and minerals hits most of the recommended nutritional targets.

As an example of a Paleolithic diet’s benefits, boosters point to the people of Kitava, Papua New Guinea, where plenty of paleo food is available. And Kitavans do exhibit low rates of obesity and diabetes, and lower blood pressure and cholesterol than Western (specifically Swedish) adults.

But it’s silly to say the Kitavans eat precisely what humans evolved to eat. They get 75 percent of their diet from carbohydrates. As hunter-gatherers go, that makes them an outlier—one survey of 229 modern H-G societies found carbohydrates accounted for 3 to 53 percent of daily calorie intake. Surely the reality is that ancient diets varied widely from place to place, as they do now, based on what was locally available.

Never mind what cave folk actually ate. What I want to know is, will the diet we call paleo do me any good?

There’s little evidence so far. As is common with diet fads, experiments to date have been small-scale and inconclusive. Some of them suggest eating paleo makes it easier to lose weight, but that’s a side issue. The core question is: If you’re healthy and fit on the pyramid diet, will going paleo make you healthier and fitter?

I’m not seeing it. Looking at the big picture, we don’t lead anything like a Paleolithic hunter-gatherer lifestyle. One analysis estimates prehistoric humans estimates burned three to five times as much energy per day as we do. Never mind diet—paleo-style caloric intake with zero hunting and gathering means in no time you’re pulling a woolly mammoth’s weight.