Just when you thought that the current reincarnation of dance-punk was going the way of the buffalo (or ska), along comes the New Young Pony Club to simultaneously save the genre and prove that it’s no boys’ club anymore. In a genre that’s as superficial as the monotone vocals and programmed beats that define it, Fantastic Playroom emerges as an accomplished album full of maturity while giving credit to where it’s due, from the jungle drums of “Hiding in the Staircase” to the Wire-influenced “Talking, Talking.” Vocalist Tahita Bulmer never fails to add some tantalizing fun to songs like “Jerk Me,” which, alongside the previously released sex-romp single “Ice Cream,” sounds even more potent. So before you start to grow out your fashionable mullet or put away your V-neck undershirts, be assured that NYPC still makes dance music that is fashionable and meaningful. (ModularPeople.com)

The Golden Dogs suffer from blowing their load too early, because Big Eye Little Eye’s opening song “Dynamo” is one of the most exciting things you’ll hear from an indie record this year. Blasting out of the gates with an energy that puts any self-respecting punk band to shame, this three-chord powerhouse adds Jerry Lee Lewis piano and dueling female vocals, culminating in one apocalypse of an ending. And then it just stops, leaving the listener gasping for breath. The rest of the album is worthwhile, with some Cold War Kids-inspired crooning on “Saints at the Gates,” and the singers battling to be loudest on “Life on the Line,” but none of it matches the intensity of the opening track. (YepRoc.com) 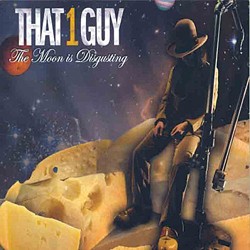 That 1 Guy
The Moon is Disgusting

One-man bands and recording artists are always something of a novelty. Sometimes there are brilliant sparks of ingenuity and creativity (like Beck or Sparklehorse), but some artists suffer from overindulgence or just plain silliness without any other musicians to put in their 2 cents. That 1 Guy seems to be stuck in the middle of those two categories. His dark, menacing voice over industrial-mixed-with-whimsical dance beats is unlike anything you’ve heard since Primus, but I would like to think that having other band members would ix-nay a song called “Buttmachine.” Even a song worthy of Matrix-coolness like “Mustaches” becomes goofy with lyrics like: “With a lip this fat/ we can tickle all the bits/ ’cause with a ’stache this rad/ the truth is going to slip.” (That1Guy.com)
{::INSERTAD::}
cw