How Utah advanced marriage equality, and what happens next 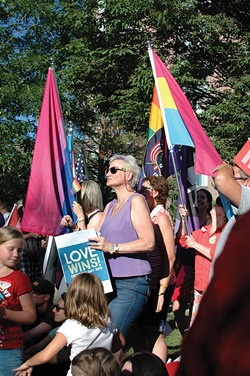 A few days before Christmas in 2013, when U.S. District Judge Robert Shelby tossed the state of Utah's same-sex marriage ban in the gutter, allowing more than 1,000 same-sex couples to wed, a thick wave of change spread across Zion.

Because the Utah Attorney General's Office failed to file a routine request that Shelby's ruling be put on hold until higher courts could hear the case, gay couples in the Beehive State immediately began to wed. The 10th Circuit Court of Appeals in Denver had little sympathy for Utah, and a panel of judges denied the state's request to halt the weddings. Then, on Jan. 6, 2014, U.S. Supreme Court Justice Sonia Sotomayor put an end to Utah's 17 days of marriage equality.

Six months later, on June 25, 2014, the 10th Circuit Court—in an echo of Shelby's ruling—once again tossed out Utah's ban, and in doing so, made gay marriage legal in Utah and five other states. Rulings favoring the right of same-sex couples to wed followed in the 4th, 7th and 9th District Courts.

But in November 2014, the 6th District court that represents Michigan, Ohio, Kentucky and Tennessee upheld state bans on gay marriage, a ruling that sent this generation's loftiest civil rights issue to the highest court in the land.

As this wildfire of court proceedings spread across America, the foundation of Shelby's ruling—that bans on same-sex marriage deny rights to equal protection and due process under the 14th Amendment—was sewn into the rulings.

And on Friday, Utah attorneys and gay marriage advocates saw Shelby's handiwork in the Supreme Court's 5-4 decision that once and for all brought marriage equality to all 50 states.

In his opinion written for the court's majority, Justice Anthony Kennedy quotes from a single appeals court case: Utah's Kitchen v. Herbert—a fact that Clifford Rosky, a University of Utah law professor, says shows how much impact this case and Shelby's logic had on the Supreme Court.

Rosky said the Supreme Court's ruling is a "ringing endorsement of the findings of Judge Shelby and the 10th Circuit that laws like Amendment 3 violate a fundamental right of same-sex couples to marry."

As Gov. Gary Herbert and other conservative Utah politicians lamented the court's decision, a high-minded position emerged, which has become the default conservative talking point on any topic involving the balance of power between federal and state governments: that of states' rights.

"I am disappointed with the decision by the court to usurp state authority and overrule the voice of the people of Utah as demonstrated by legislation with regard to marriage," Herbert wrote. "I am also very concerned with the overwhelming trend to diminish state autonomy. I believe states should have the right to determine their own laws regarding marriage."

While Herbert, the Utah Legislature and perhaps even the citizens of Utah (Amendment 3, which banned gay marriage in the Beehive State, was approved in 2004 with 66 percent of the vote), would support laws here that violate a person's constitutional rights, that is not reason to allow it to happen, Rosky says.

"All of these arguments represented to the Supreme Court, they were explicitly rejected today," Rosky says, referring to states' rights. "Every individual has a fundamental right to marry, whether the governor likes it or not. Fundamental rights are subject to the outcomes of no elections. We don't take votes on fundamental rights."

The next frontier in the area of equal rights, Rosky says, might well be in passing state and municipal laws regarding discrimination against LGBT folks in the marketplace. According to Rosky, the Legislature made Utah the first Republican-controlled state to pass a statewide LGBT anti-discrimination law when, earlier this year, it prohibited workplace and housing discrimination. Still, Rosky says much work remains to be done to protect people from discrimination where they shop, eat and recreate.

Battle lines are now being redrawn around what some consider the defense of religious liberty—a term others call a license to hate—especially in the way Rosky fears new laws would allow private business to marginalize LGBT citizens.

In Washington, D.C., Utah's own firebrand Sen. Mike Lee started preparing for the bad news at the beginning of June by reintroducing a bill he had first penned in 2013 seeking to bar the government from denying any person or group tax-exempt status for exercising their religious conscience rights.

Troy Williams, executive director of Equality Utah, however, has lambasted the bill as a federal version of the controversial religious freedom bill passed in Indiana that would allow business owners greater legal standing to turn away gay customers from their places of business.

"It would allow individuals and businesses to freely post signs that say 'Gays Not Served Here,'" Williams said in an Equality Utah statement. "Much like Indiana's recent unpopular efforts, Sen. Lee's legislation would allow faith to be used as a defense against any claim of discrimination."

While critics worry Lee's bill is a federal version of the Indiana bill, Lee has said the focus is on protecting religious schools and organizations. Conservative backers point to comments made during a 2015 Supreme Court hearing when U.S. Solicitor General Donald B. Verrilli was asked whether a religious school could lose its tax-exempt status for opposing same-sex marriage. He responded, "It's going to be an issue."

On a policy front, Connor Boyack of The Libertas Institute has pushed for another option to change the marriage game: government-free marriage. Given the libertarian idea that government ought to mind its own business —which to libertarians, comprises a fairly narrow set of tasks—Boyack's institute is organizing for a model that would subtract government out of an equation he maintains should only be about the union of two loving people.

His group points to a proposal in 2015 that passed out of the Alabama Senate, but that was not heard by the House before the assembly adjourned. That bill sought to abolish judges from issuing marriage licenses. Instead, marriages would be enacted by contract.

Boyack says, in Utah, it would be "an inversion of the status quo," with people contracting their unions and then using the contract to apply for health, tax and other benefits that come with marriage. He says that despite the ruling, the fights over marriage will continue, and lawsuits will be filed back and forth by LGBT and religious liberty activists so long as marriage is still tethered to the government.

"We can get back to the place where people live and act according to their own definition of what their relationships and actions are, and we can have tolerance and mutual respect," Boyack says. "But so long as the government is the middleman, I don't see that happening."

A government-free marriage bill is expected to be heard in Utah's next legislative session.

Bill Duncan, director of the Center for Family & Society at conservative Utah think tank the Sutherland Institute, says his organization is looking to support short-term defensive positions like Lee's legislation, but he says conservatives have to dig in for the long haul, the same way they have been slogging for decades now through the abortion issue.

"It's a big cultural thing," Duncan says. "It's not like, 'Oh, well, let's quickly amend the Constitution and fix that politically. I don't see that being a possibility at this point."

Duncan says the culture has to protect conservative citizens from being bullied for sticking to their old-time religion before political leaders can make any kind of headway on the issue again.

"We have to do some cultural work just to make it comfortable for politicians to say they support this," Duncan says.

Quin Monson, a political science professor at Brigham Young University and director of the school's Center for the Study of Elections and Democracy, says that conservatives can't expect to treat this high court loss the way they did the 1973 Roe v. Wade decision that legalized abortion. The reality, he says, is it's not an apples-to-apples comparison between these two fights. Whereas attitudes have budged little on abortion over the past 40 years, this "is just not the case for gay-marriage attitudes that have seen dramatic change in less than 10 years," Monson says. He points out that on issues of same-sex marriage and antidiscrimination, popular opinion has shifted. A 2014 BYU poll found 41 percent of active Mormons in the state favored at least civil unions for LGBT couples.

"Politicians pay attention to that kind of thing," Monson says. "They may not change their attitude, but it will change what they choose to do and speak up about."

Smart politicians, he says, have already circled their wagons around the issue of religious liberty and recognize that, at this point, they need to focus on making sure people of faith are protected in a world of such fast-moving changes in opinion. He points to Utah as leading this movement at the state level because of its joint religious-liberty and LGBT anti-discrimination bill passed in the 2015 session.

Wherever Utah ends up in future battles surrounding equal rights, it has for the better part of a decade been at the forefront of legal cases and discussions surrounding marriage equality—a fact that doesn't surprise the University of Utah's Rosky one bit.

"We're not afraid to be different, and I think that that can lead to some surprising results," he says.