After 42 years, Utah Arts Festival keeps looking for ways to grow and evolve. 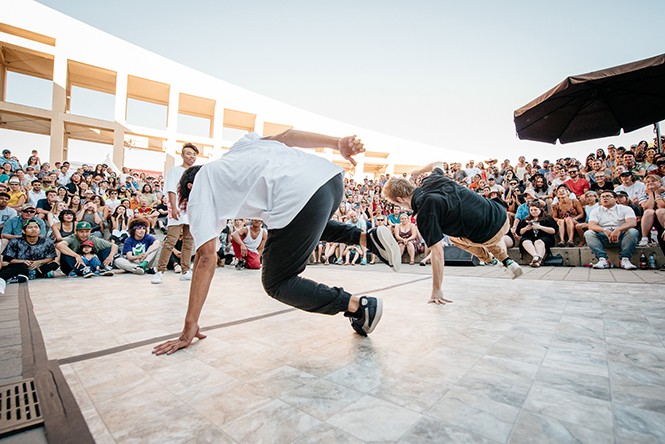 After more than 40 years as an annual summer institution, it would be easy for the Utah Arts Festival to settle into a comfortable rhythm. According to festival executive director Lisa Sewell, however, the only thing you can count on never changing about UAF, is that it will never stop changing.

"We're always trying new things," Sewell says. "Is it challenging? Yeah. Would it be easy to do the same-old same-old? Well, yeah. But that would be really boring, and I wouldn't still be here 23 years later. ... Every year, there's new angles and new ways to do things."

That doesn't mean the festival is starting from scratch every year. Most of the components familiar to regular attendees are still in place. Booths showcase the work of 175 visual artists in every imaginable medium. Stages feature live performances by local musicians, dance organizations, comedians and spoken-word artists. The library auditorium hosts the Fear No Film short-film programs. Food trucks and stalls offer a sampling of wonderful local cuisine.

Yet while the basic infrastructure remains consistent, there are also ongoing efforts to expand the idea of what falls under the festival's mission, whether that's the addition of the Urban Arts yard several years ago, or the growing presence of technology and "maker" opportunities. And there's also an understanding that, in a world of ever-growing entertainment options at our fingertips, it might be necessary to make creative marketing decisions to reach every possible audience.

That was part of the incentive for changing the nightly music headliners on the amphitheater stage—which had been included in festival admission in previous years—into a program called Arts Fest Amplified, with $25 tickets for acts like indie band Gomez, EDM DJ A-Trak, hip-hop artists People Under the Stairs and soul-rock outfit St. Paul and the Broken Bones. While Sewell notes that the additional ticket charge is in part a way to budget for higher-profile acts than the festival might have been able to land previously, the change also gives UAF an opportunity to market specifically to the concert-going arts consumer.

"It's thinking outside the box as an organization," Sewell says. "When we're pre-selling—and a lot of concert-goers pre-buy tickets—with those we're sending out information about the festival. They can see, 'Oh, it's not just going down to see Gomez in the evening, I can go and see all of this great art.' It will be interesting for us, after the festival is over, to integrate the database of the concert people into our regular database, and kind of compare and contrast, to see how our audience has grown, new blood for us to talk to."

Additional opportunities to expand the arts audience come from visual artists who might catch the eye of younger attendees. Erik Jensen of West Valley City creates mixed media pieces from recycled computer keyboard keys; Todd Perkins of Denver, Colo., makes custom guitars, including one shaped like Star Wars' Millennium Falcon; returning audience award-winner Justin Hillgrove of Snohomish, Wash., paints images including culturally familiar characters like Mario Bros. According to marketplace co-coordinator Matt Jacobson, recognizing the appeal of such artists factors into the way booths are situated, so there's a chance to expand the reach of another artist.

"[Hillgrove is] right in tune with this generation," Jacobson says. "They flock to his booth. ... It's nice to know we have those kinds of artists who have that kind of draw. So maybe you put a wood artist next to that, ... because they're going to spill right in and go, 'This is cool, I had no idea.' ... [Perkins' Millennium Falcon guitar] is in the festival guide, somebody's going to see that and go, 'Oh, let's look at this guy.' And right next to him, let's put a classically trained oil painter."

Nurturing the next generation of arts-lovers is always part of UAF's mission, and Sewell hopes that attendees who might not otherwise experience a ballet performance or go to an art gallery keep that interest going into the rest of their year. "I talked to some friends of mine who brought their grandkids, and their grandkids finally get to see ballet, just sitting there mesmerized," Sewell says. "That's the hope we have, that you're going to take that kid now and integrate them in some experience with art beyond their experience with the festival."

Expand and engaging that audience means always thinking of new ways to keep the festival vital, and provide experiences that get people out of their chairs and out to Library Square. "From my perspective," Sewell says, "I'm always excited about how every year it's different, and there are new things to explore. I've had some feelers out for other large spectacle acts, one that's on my radar for 2019 and they're going to be amazing. It's like, 'I'm already done with this year; let's move on to 2019.'"