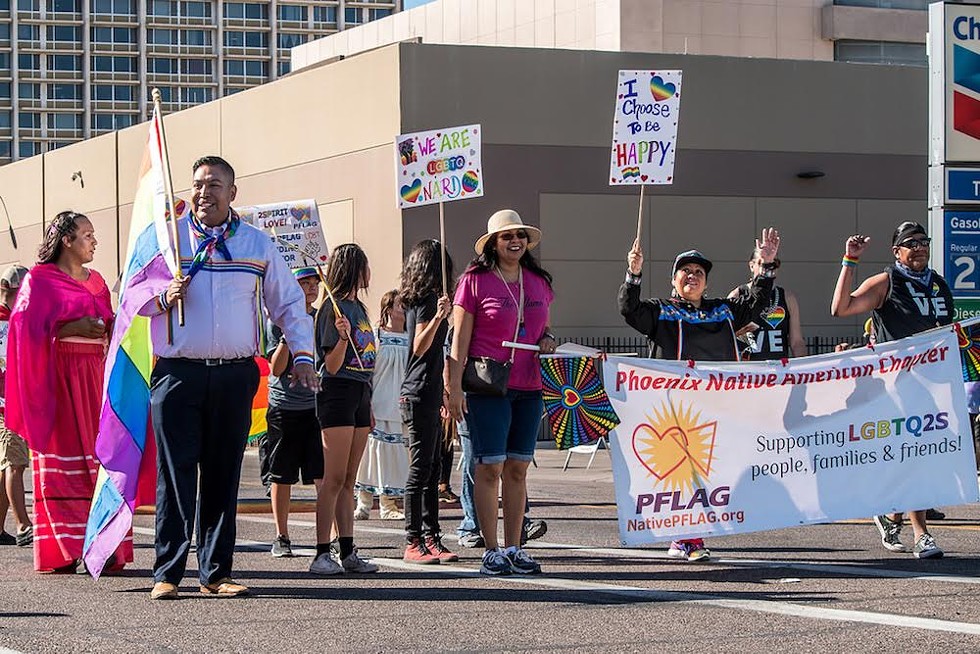 Alray Nelson has campaigned for years for the right to marry the man he loves. Nelson, 32, a member of the Navajo Nation, works with his nonprofit, Diné Equality, to educate tribal council members and citizens about the need for marriage equality on the reservation. When he speaks to people living there, young and old, Nelson says he generally finds Navajos to be accepting of LGBTQ individuals. However, the tribal council, which in 2005 outlawed same-sex marriage, is the biggest roadblock between him and equal rights.

Nelson said a recent president of the Navajo Nation told him gay and lesbian couples should leave the reservation because marriage equality was a "white man's way of thinking." But, Nelson contends, most of America's tribal nations traditionally accept, and in many cases revere, LGBTQ members. In fact, for the Navajos, the nadleeh, a complex gender identification category, is part of the tribe's creation story. It was the introduction of Christianity and the erasure of culture that gave rise to the idea in Native American communities that homosexuality was wrong.

"Point period: It's wrong for anyone, whether a young person or an elder, to think LGBTQ is not traditional," Nelson says. "We were getting married long before Stonewall had happened in New York City," he said, referencing the 1969 uprising against homophobic police brutality. "We were recognizing the rights of LGBTQ and trans men and women in our communities, and we were holding them as sacred beings."

Nelson said he is not aware of a tribe that did not traditionally accept LGBTQ members. However, among the 567 federally recognized tribes in the United States, he and his colleagues count only 35 that recognize same-sex marriage.

As marriage equality continues to gain acceptance across the country, tribal nations that refuse to recognize same-sex marriages will find themselves increasingly at odds with state and federal laws, as well as popular opinion, which could present a danger to sovereignty. As law professor Marcia Zug astutely noted in a 2016 piece for The Atlantic: "tribal sovereignty remains precarious," and the longer tribes enact same-sex marriage bans "the higher the likelihood that they will negatively impact perceptions of tribes and tribal justice. Historically, when tribal and Anglo-American values were in conflict, non-Indians tended to disparage tribal values as backwards, inferior, and unjust."

This was certainly the case when my tribe, the Cherokee Nation, revoked the citizenship of the Freedmen, the descendants of black slaves once held by Cherokees. The move was widely condemned as a civil rights violation, and it spurred federal lawmakers and agencies to withhold funds and even question the legitimacy of the Cherokees to govern themselves. The Cherokee Freedmen eventually won in court and have since been granted full tribal citizenship.

Civil rights protections for minority communities have seen significant setbacks under President Donald Trump's administration, and Nelson argues that tribes should instead assert their sovereign authority by stepping in where the government is failing those communities. "Use our sovereignty as a way to protect our people," he said.

But while LGBTQ Navajo Nation employees who are paid through federal grants have workplace-discrimination protections, the tribe has no laws protecting the rest. And that can have dire consequences. A 2016 study by the Navajo Nation Human Rights Commission found transgender Navajos felt not only misunderstood by their own people and subject to higher-than-average rates of violence, but also that violence against them is tolerated.

"It's very clear that if you identify as trans, especially if you're a Navajo trans woman living here on the reservation, it's more likely you're going to see violence within your lifetime because it's become so normalized and it's an issue that no one is really talking about," Nelson told me.

The continued legacy of colonialism, a tragic but very real part of this country's history, leaves indigenous peoples experiencing higher rates of violence, trauma, abuse, and a variety of negative health consequences. Compounding that with gender discrimination has horrifying results. One study found among Native Americans who identify as "two-spirit," a distinction often used to describe several gender identifications, 78 percent of female-identified respondents "reported being physically assaulted in their lifetime," and 85 percent "reported being sexually assaulted in their lifetime."

As Native peoples who are constantly asking the broader country to recognize and respect our unique and important histories and cultures, it hardly seems appropriate to use our sovereign authority to discriminate against our own.

A version of this article appeared in High Country News.