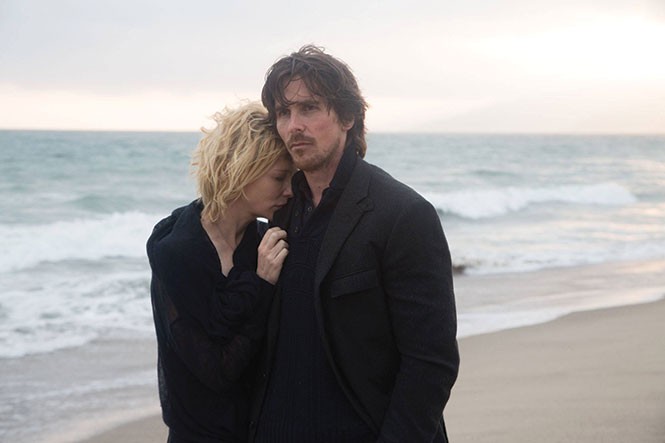 How do you approach an artist who is clearly a kind of genius at something that just doesn't appeal to you?

Everyone likely has a few personal examples: the hip-hop wizard who's speaking another life language; the award-winning writer whose novels are returned to the library with a bookmark a third of the way through; the creator of popular TV sitcoms at which you have never, not once, ever laughed. Or, perhaps it takes the form of the films of Terrence Malick: dreamy, impressionistic reveries on the mysteries of the soul that achieve a kind of transcendence, but also make you wonder WTF is actually going on in them.

Knight of Cups continues a style that has become familiar ever since the publicity-shy Malick returned to filmmaking in the late '90s after a long hiatus, and most specifically on the heels of 2011's The Tree of Life and 2013's To the Wonder. It's the story of a man—in this case, a Hollywood insider named Rick (Christian Bale), who is apparently, at least according to the press notes, a screenwriter—at a crossroads, trying to make sense of his life. He has a complicated relationship with his aging father (Brian Dennehy) and recovering-addict younger brother (Wes Bentley), but mostly he has complicated relationships with the women in his life. So, we follow him through several such relationships: with his ex-wife (Cate Blanchett), with a married woman (Natalie Portman), with a free-spirited stripper (Teresa Palmer) and with a model (Freida Pinto).

It would be easy enough simply to dismiss Knight of Cups as the woe-is-me musings of a rich white guy who has everything but just doesn't feel fulfilled, man. Malick lets the camera prowl behind Rick as he attends massive house parties, cavorts with two-at-a-time girls in luxury hotel rooms, hangs out at high-fashion photo shoots and cruises around Southern California in his convertible. Life is so hard that he has to keep trying to find elusive happiness with one beautiful woman after another. Boo freaking hoo.

Even that problem might have been solvable if Malick seemed to have any interest in making Rick—or any of these characters—flesh-and-blood people. Bale plays the part as though he were given the same basic direction for every scene; his facial expression almost never changes from a look of wan discontent. Virtually all the dialogue in the movie takes a form that doesn't actually involve watching the people on screen saying the words, creating the vague sense that all of these people are beings of pure thought. On a couple of isolated occasions, Malick introduces an actual, physical threat of some kind—an earthquake, or a home-invasion robbery—yet those scenes never generate any real tension or drama, because it's hard to imagine that either a falling potted plant or a bullet would do anything to these wispy figures but pass right through them.

And yet. And yet. It's hard not to get occasionally swept away into a kind of vision that's almost more like symphony or poetry than it is like filmmaking as we usually accept the term. Malick and cinematographer Emmanuel Lubezki may have their go-to bag of tricks—the camera restlessly following someone retreating into the distance, fish-eye panoramas or characters in wordless magic-hour-lit embrace—but those images can have the cumulative effect of repeating a mantra, where watching the on-screen collage becomes a kind of meditation. Cinema needs more artists who shake the foundations of the form. Malick consistently does that.

The challenge becomes finding an anchor, so that the ethereal experience of something like Knight of Cups connects to actual human experience. It's clear from the film's key reference points—opening with quotes from The Pilgrim's Progress and using the cards of the tarot deck as chapter headings—that Malick is reaching for big symbolic and allegorical territory, capital-letter stuff like Faith and Love and Rebirth. That doesn't mean he can't also tell a story, one where the emotions are more than abstractions. Somewhere, weaving through the palm tree-lined boulevards and frolicking in the surf, is a guy named Rick. Whatever singular thing Terrence Malick has created, its appeal will be limited if it's too easy to forget that guy.