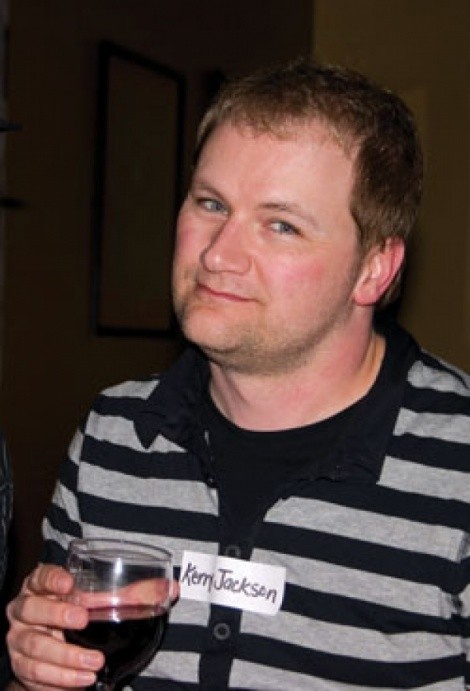 “Phil you’re a nobody,” Brad said when I answered the phone.

My brother Brad is a lawyer, so I know he could not have come to this conclusion without evidence, facts and possibly even a little ipso facto lawyer talk. “Are you one of the judges tonight at the Libation Nation Celebration best-drink contest in Park City?” he asked.

“In that case and henceforth, you herewith will be referred to as ‘a nobody.’”

My brother, in an attempt to masculineize the minivan he drives, stuck an X96 Radio From Hell (RFH) bumper sticker on his “ride.” And that morning, as he was cruising into work, one of the RFH guys, Kerry Jackson, said he would be a judge for the same contest as I and that he was “the big name.” Then the other RFH hosts, Gina and Bill, read the names of the other judges and, in summation, concluded the rest of us were the equivalent of day-labor judges.

Well, if I was a nobody, then I sure seemed like a somebody when a limo driver called and said he’d be to my house in Salt Lake City to pick me up for a luxurious ride to Park City. Knowing I was going to step out of my front door and into the spotlight and envy of all my neighbors when a limo came rolling down Downington Avenue, I put on my funeral outfit. These are the clothes I keep in the back of my closet in case someone dies. Turns out it was appropriate, because I died a little inside when I saw my “limo” was actually a minivan.

When we arrived at Park City’s Kristauf’s Martini Bar, the judges were given 13 specialty drinks from different bars around town to sample and rate. Bartenders from each establishment made four drinks and then, three or four judges shared one beverage out of the same glass. Boy, was I glad my cold sores had cleared up. 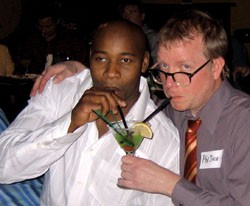 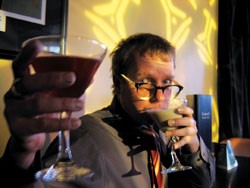 Just before we took our judging seats, and just after the photographers and autograph-seekers quit swarming around Kerry Jackson, I said, “We all may be nobody in your eyes, but we’re not deaf.” Jackson said I had it wrong and reminded me that I wasn’t even supposed to be there. John Saltas was supposed to represent City Weekly at this event but, since he couldn’t show up, I was the stand-in.

“Besides,” he said, “aren’t you just the guy who talks about cheap places to buy Pabst Blue Ribbon? What are you doing here?”

It doesn’t get any cheaper than free. And, with that, the slippery slope to drunken oblivion began. I sat next to Olympic bobsledder Ivan Radcliff. Talk about the right man for this job. If you want to go downhill fast, either hop into a bobsled or drink 13 cocktails of varying alcohols in a two-hour period.

By the end of the night, we had vodka, peach schnapps, rum, melon liquor, Godiva dark-chocolate liqueur, Absolut pear, Grand Monarch, Jäger, tequila and one judge throwing up in the bathroom (not me). 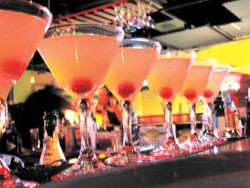 My favorite drink was the Cat Mint or Turtle Martini (depending on which set of drunken notes I refer to), cooked up by Drew Johnson from the Spur Bar & Grill (350 1/2 Main St.). It tasted like an iced-tea mojito with Malibu rum, mint leaves, Bacardi 151 and a splash of Coke. But, like my new bobsledding friend, that drink took the silver medal.

The winner of the third annual cocktail contest was the Crisp Pear, a creation of Lial Gingell of Kristauf’s. After his drink was chosen the winner, Gingell combined Grey Goose La Poire with peach schnapps, 360 Vodka, a splash of pineapple juice and a float of brut Champagne 14 times, one for each of the judges.

If you want to be a somebody in Park City, go to Kristauf’s (825 S. Main) on Nov. 17 where judged drinks will be served for $5 a piece. If you can drink all 13 cocktails, then you, too, can be a persona non grata. As in, you won’t remember nothing or nobody.