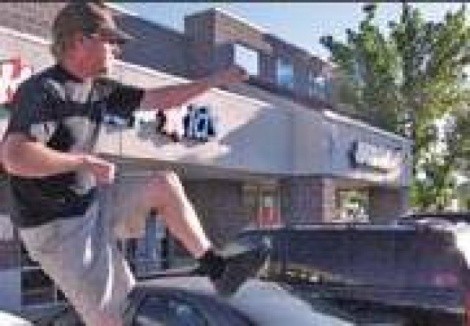 I told my parents I hated them. They promised my sister a horse, my brother a cat—but they would not let me have a pet panda bear. Even at 5 years old, I knew “hate” had to be the worst thing you could say to your mom and dad. Worse than repeatedly asking, “Are we there yet?” After dropping the little-boy-size H—bomb on my parents, I ran up the shag carpeted stairs of our rental house, slammed the bathroom door, looked in the mirror and couldn’t have been more pleased with the reflection I saw. I was staring at a winner.

My panda bear would be named “Ping-Pong.” When I was 5, we were living in Washington, D.C., and the National Zoo had just opened the Ling-Ling and Hsing-Hsing panda bear exhibit. Needless to say, I bought in to those two cuddle bears, hook, line and bamboo shoots.

Looking back, this was probably the first time I was rope-a-doped by mass media and marketing, but it sure wouldn’t be the last. I moved to Alaska and worked at a radio station when Northern Exposure was on TV. Lived in Antarctica after watching March of the Penguins. And I still love nothing more than saying, “Where’s the beef?” at McDonalds or asking “Whassup?” and “Can you hear me now?” when I call my Friends at The Office. Cheers.

It should then come as no surprise that I said, “Yes!” when Mike called and asked if I wanted to take taekwondo with him and his wife, Mary. Actually, the phone call went like this: “Hey, Phil, the place where I take taekwondo is offering a 30-day free-trial period.

Are you interested?” And I said, “You can call me Ray or you can call me Jay, but you doesn’t have to call me Phil … Whassup? Can you hear me now?” The reason I was so excited to learn karate, taekwondo or—as Confucius might say— “He who kicks ass” was because of panda bears. Budweiser lizards have had their say and Camel Joe is up in smoke. But now, thanks to the movie Kung Fu Panda, it seems panda bears are the new penguins. They are black and white and cute all over. Plus, since I never got a panda bear, at least I could learn kung fu like a panda.

Mike gave me the address where to meet him, but he kind of mumbled through the name of his karate dojo. I pulled up to 3185 W. 5400 South and found myself parked in front of the nonmenacingly named house-of-pain called Karate for Kids. With a 30-day free trial membership, I figured by Day 29, even my inner child would be king of this playground. Boy, was I in for a world of hurt.

Karate for Kids is a member of the American Taekwondo Association. My class is taught by Mr. James Dickinson, called “Mr.” in deference to his 5th degree black belt. While the early afternoon classes are for kids as young as 4, Karate for Kids also offers adult classes.

We stretched, kicked and punched until my body felt like the soft dough in taekwondo. Then I was told those were just the warm-up exercises. Doh! If anyone tries to attack me with a soft sparring pad, I learned I can kick it out of my attacker’s hands in as few as four tries—if he or she remain perfectly still. Same thing goes with blocking a really slow and deliberate knife attack, and don’t even try to put me in a loose headlock.

I’ll have you on the ground in minutes. At Karate for Kids, a place where all the pressure points are well known, Mr. Dickinson could have applied five degrees of pressure to get me to sign up for classes. Instead he said, as I was leaving, “Hope to see you again.”

By the way, my parents got me a turtle. I named him Ping-Pong. He quickly died. Send cheap tips and feedback to comments@slweekly.com.