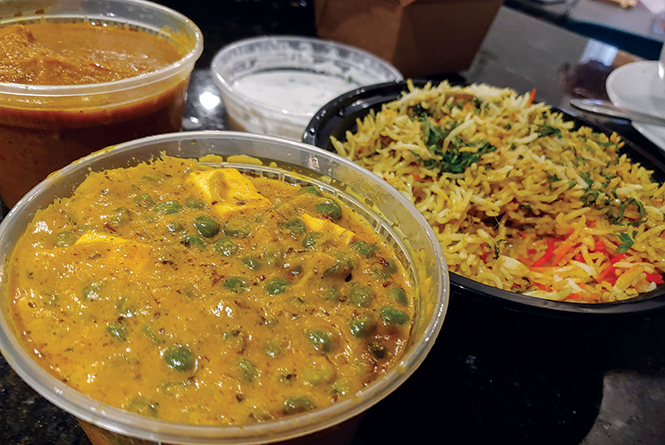 As beloved as tikka masala, samosas and naan are to me, I've visited enough Indian restaurants to know that such mainstays barely constitute a lick of the tip of the Indian food iceberg. Every region and city comes with its own culinary identity, and the staggering variety of that cuisine is something we rarely get to experience here in the states, let alone in Utah. Though our state has a fantastic array of Indian food stalwarts, I'm hoping the arrival of Chettinad House (169 S. Main Street, 801-410-4696, chettinad-house.com) heralds an influx of regional Indian cuisine for the Wasatch Front.

Chettinad refers to a metropolitan region near the Southwestern coast of India that was built on a foundation of wealth and excess. It takes its name from the Chettiars, a clan of merchants and bankers who funneled their wealth into the palatial estates that checker the region. Such extravagant lifestyles demanded a high-class menu to match, and thus the Chettinad regional cuisine was born. Fueled by dishes that could appropriately flaunt their seemingly unlimited access to spices and cross-continental flavors, Chettinad food became known for its depth of flavor—which was precisely what I was looking for when I paid this downtown spot a visit.

Chettinad House opened its doors in mid-July, occupying the space that previously belonged to the historic Lamb's Grill. Though leasing a Main Street property that was vacant for three years—and doing so during a late-stage pandemic—aren't what I would call ideal circumstances for a new restaurant, there is something headstrong and ambitious about the whole operation. After perusing their equally ambitious menu—they offer breakfast service filled with crepe-like dosas ($5.95-$8.95), coffee, and eggs cooked any way you like them in addition to full lunch and dinner service—it became clear that Chettinad House was my kind of crazy.

While there are a few traditional Indian dishes that I can't go without, I decided to focus on dishes that were new to me. After all, this was a restaurant that anchored itself to a specific region in India, so I was looking forward to a bit of culinary schooling. I started with the Chettinad chicken masala ($14.95), which was a perfect entry point. Unlike the other masalas I have known, the gravy-like curry on this dish is a more russet hue, and smelled a bit smokier and cumin-heavy than its cousins. Diners have the option to jack the spiciness of this dish up as they like, but be warned—Chettinad House doesn't restrain themselves when it comes to spice. If you want something hot, you better damn well be prepared to get what you ask for.

Though a dish of Chettinad chicken masala might look like other tikka masalas, it deviates quite far from them in terms of flavor. This is a rich, deeply fragrant variety that goes perfectly with the dark meat chicken that swims in its velvety embrace. The smoky, peppery flavors definitely lend themselves to increased heat levels, but even the mild variety is an aromatic treat for curry fans.

I also ordered some mattar paneer ($13.95) and lamb biryani ($15.95), which I couldn't resist. Though neither dish is specific to Chettinad cuisine, the regional flare for deeply-layered flavors was definitely on display. Mattar paneer combines the cubed cottage cheese known as paneer with peas and tosses the two in a buttery sauce. It's a bit lighter in flavor and creamier in texture than the Chettinad chicken masala, which makes a plate with both curries on top of some pillowy jasmine rice into a lovely palette of contrasting flavors and textures.

I ordered the lamb biryani to see how Chettinad House would differentiate this ubiquitously Indian dish, and I was impressed with their take on it. Biryani typically begins and ends with savory and spicy, but Chettinad House has added some well-placed herbaceous notes that make this traditional dish unique.

A strong appetizer menu is always nice to see, and Chettinad House once again proves its ability to take traditional dishes and put a unique spin on them. Since it can be hard to choose just one appetizer from the list, I'd suggest going with the Chettinad platter ($7.95) which comes with two samosas, three vegetable pakoras, and three pieces of eggplant. My order was missing the eggplant, so I'm not sure how that is prepared, but the samosas and pakoras were excellent. I've had both so often that I'm used to them being treated as a kind of throwaway, but the samosas were flaky and the filling had a slight citrus flavor that helped cut through the starchy potatoes.

Of course, any meal here needs to be consumed with copious amounts of naan, and the bread basket ($8.95) is a great way to get a variety of Chettinad House's traditional flatbread. In addition to plain and garlic naan, the bread basket comes with onion kulcha, which is a bit fluffier and stuffed with cooked onions, and some kabuli naan, which is stuffed with ground nuts and dried fruit—ideal for a light dessert.

Overall, I enjoyed learning a bit more about Chettinad cuisine, and I'm glad Chettinad House is here for some tasty education. For local fans of Indian food who are hankering for something a little different, this place definitely needs to be on your radar.