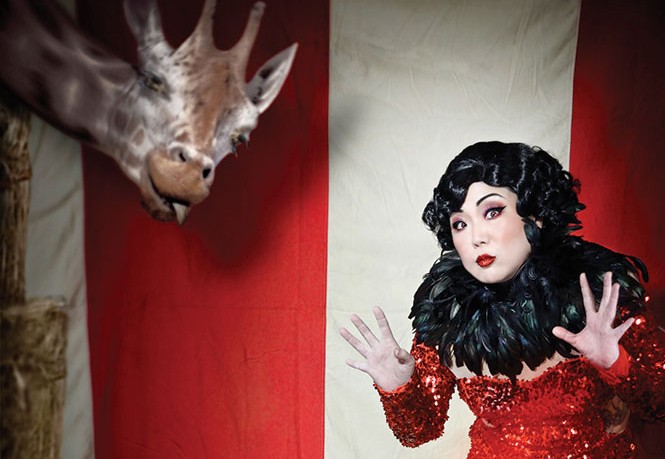 For comedian Margaret Cho, it's been a long road to the Fashion Police soundstage. One flecked by growing up in 1970s San Francisco, where she attended grammar school in the Haight, and was later reared by drag queens on the Castro. A path also forever marked by the relationship with her immigrant parents to whom she was (and perhaps still is) the greatest enigma.

A lifetime after her 1994 attempt at a mainstream sitcom that caused her to develop an eating disorder, Cho is now more comfortable in her skin than ever and at the top of her dissident game. Her live shows are a transgressive halfway house for those who live against the grain and, for an hour or so, feel comfort in being surrounded by their kin; a safe haven where along with sharing her thought process after getting high ("What would it be like to brush Chewbacca?"), she discusses the raging battle between "fag hags and dick widows," along with more harrowing moments, like being sexually abused starting at age 5.

Not one to be pigeonholed, Cho is set to release American Myth, a music album on April 29. In preparation, she's previewed tracks like "Fat Pussy" and "(I Want to) Kill My Rapist" on her YouTube channel. The video for the latter features Cho on a Tarantino-esque mission to avenge her molester, aided by an army of schoolchildren. They all don black T-shirts emblazoned with a stylized tribal peony. "That's my Korean name," she says.

In a candid chat with City Weekly prior to her Wiseguys gigs this weekend, Cho opened up on Hollywood's diversity problem, tequila and preserving Joan Rivers' legacy.

I feel you. I just moved here, and it does have a needle-exchange-program feel.
Yeah! It's a weirdly controlled substance. Places that would normally serve alcohol there, don't. It's just weird [laughs].

What's your alcohol of choice?
I like tequila. For me, it doesn't seem like that hardcore of a drink, but it is there.

I remember seeing you in one of your earliest, if not your first TV appearance on The Arsenio Hall Show, which seems like a lifetime ago ...
It was. That was over 20 years ago.

Do you still remember that?
Yeah, of course. I'm close with him, too. He did a redo of his show I guess last year or the year before and I was on that. He's an old friend, and somebody who gave me my start; he's like my Johnny Carson. He is my Johnny Carson.

In your act, you joke that when you told your mom you wanted to be a comedian, she responded saying, "Oh, maybe it's better if you just die." Is it fair to say she's come around?
Oh, she loves it. She's really proud and happy and loves my career. She's thrilled about anything she can do, participate in, which is fun, too.

So do your parents realize you're kind of a big deal now?
Yeah, I think so. They've figured it out.

The flip side of comedy—and you touch on this so well—is darkness. How do you balance anecdotal stories with the more personal ones?
Well, you have to always be funny, too. There's gotta be a point to all the things you bring up, whatever it is. I always keep in mind that I am a stand-up comedian; the whole point of my job is to do that, so I always keep that in mind.

Along with those vulnerable moments, you seem to be the definition of defiant. Did you ever reach a point where you wanted to give up?
No. I mean, I really appreciate my job, I love it and I love everything to do with it. [Traveling] to different places, getting to do different things and meeting people, it's cool.

Recently, I read an interview with Dascha Polanco from Orange Is the New Black), and it mostly harped on the fact that she is a woman minority working in Hollywood. Are you surprised that, so many years after All-American Girl, this is still a discussion?
Yeah! I mean, there is still not a lot of representation. I think that Orange Is the New Black is perhaps the most diverse show on TV—racially diverse—and so that's really a great thing. I think we're seeing more diversity, but there still needs to be more.

Let's talk about American Myth and how you got in the mindset for that project.
It's something that I've always done. I've done music for quite some time now, and I like to incorporate a little bit into my comedy, too, but it's also separate.

I saw the video for "(I Want to) Kill My Rapist," and it moved me to tears. Do you think that's weird?
No. That's very common. I think people feel a great deal of catharsis with it—even if it's not your story—seeing all these little kids going and avenging you is a very startling image, and it can be very healing, too.

Like you, I have a very strong relationship with my mom, and she wanted me to ask you about your appearance on Hollywood Medium With Tyler Henry because she says it's all rigged.
[Laughs] I don't know, he's pretty great. Tyler is a really cool kid, and I was surprised to see how much he was kind of honing in on and how much he knew about me without knowing me. I didn't feel like it was a trick or planned out or anything, I think he's the real deal.

She also wanted me to remark that you weren't wearing any makeup.
Oh, no! I don't like to. If I can help it, I try to get away from my makeup.

Finally, how's your Fashion Police experience been? In her second voicemail, Mom wanted for me to convey that after Joan Rivers, you're "the one."
Aww.

... and that "all the others stink."
Oh no! That's so funny. It's been great, I loved Joan so much and, you know, there's no way to replace her—that'll never happen—but we try to make a show that she would be proud of. She loved Fashion Police; it was her favorite thing that she ever did, so we just try to do her justice every week.