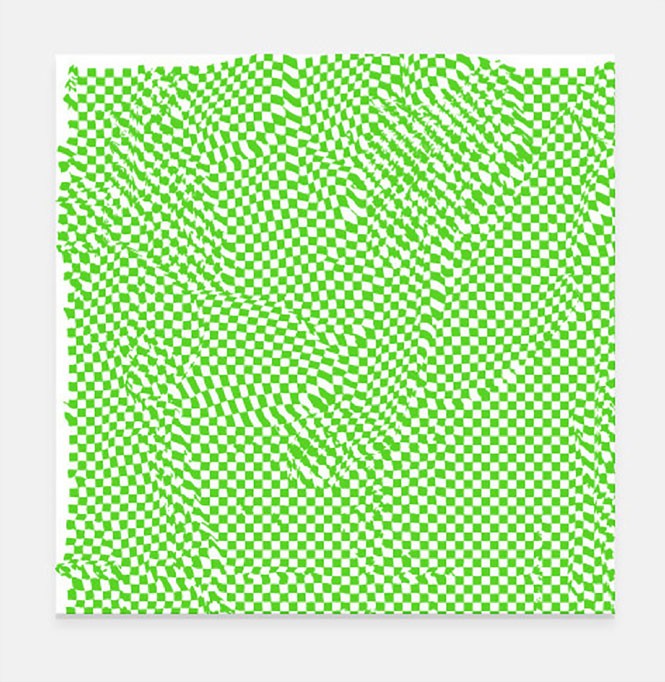 Sex as subject matter for art has been most commonly used as an avenue toward revelations about culture as well as identity. Far more rarely has it been used to suggest notions about the nature of reality itself, and the ways we perceive it.

Artist Chris Coy—who earned a Bachelor of Fine Arts at Brigham Young University, and a Master of Fine Arts at the University of Southern California—explores in his exhibit Real Sex at CUAC gallery the tensions and ambiguities of sexuality he experienced growing up Mormon. He explains that it wasn't until late in graduate school that he felt comfortable enough to allow these elements into his work: "I was embarrassed. I worried that doing so would make it easy for someone to erase my individuality through some reductive categorization. I was that teenager shoving his hands into his pockets while walking 10 feet behind his too-large family at the mall, you know?

"Art-school friendships exposed me to the power of authenticity as a material for art-making," Coy adds, "and helped me feel like it was OK to go there personally. It's nerve-racking; Mormon social culture—particularly in the Intermountain West—pretends at that act of public self-offering, while shortchanging it through all sorts of subtle coercions that erode one's will to be truly authentic, different and flawed. The pressure to conform and perform is immense, and because of it, we're exceptionally adept at covering, obscuring, hiding and deflecting our true selves. We're deeply afraid of our own nakedness."

The works on display in Real Sex employ three different artistic media. Paintings executed in Chroma Key-green paint—normally utilized on a "green screen" for video editing—include "pixel grid" shapes distorted by pornographic imagery, which is in turn hidden by the grid pattern. Photographs of window blinds—still images from Coy's film Barnrazer—tease what might be behind them. And the short video 21st Century rounds out the show.

In the ways Coy's work portrays sexuality, you could argue that the very act of playing with our perceptions—the relation between what is seen and what is hidden—also evokes a kind of active response to complete its effect, and the surfaces of those works also fairly pulsate with the resulting sensual energy. The subliminal becomes a route to the sublime. "My work oscillates between simultaneously existing potentialities," Coy says. "I reveal myself while hiding. What I cover becomes exposed. Light is both a particle and a wave."

Discussing his film Barnrazer, Coy claims it serves as a focal point of his works. "It's the generative point for much of what I've made over the last few years: films, animations, performances, writing, drawings, paintings, objects, etc.," he says. "Everything sort of folds back into and out of it. I like how it was referenced in the wall text for Analogital, a show Aaron Moulton curated at the Utah Museum of Contemporary Art in 2013: 'an ongoing and ever-changing film project ... one that unpacks varying aesthetics of repression and has become a self-oiling machine for generating sculptural props and uncanny images.' Real Sex is an echo of that film project—a series of creaks emanating from a haunted farmhouse."

Coy believes that the video "serves as a kind of coda for the show—a re-articulation of the impulses that produced much of the other work: [It's] me revisiting historical sites of personal trauma. From scary cartoons to sock drawers and family houses, I'm still looking for the things that I'm afraid I might actually find."

CUAC has specialized in challenging exhibits that often contain elements of conceptual art, and after seeing Coy's work at UMOCA among that of other artists, it is fascinating to see his works stake their claim on this gallery space. "I am super excited to work with Chris," says CUAC Executive Director Adam Bateman. "I've been wanting to for years, and this is a moment of having a great show come to fruition." Coy has also exhibited at the New Museum of Contemporary Art in New York, the Sundance Film Festival and the Netherlands Media Institute.

The works in Real Sex not only have an uncanny relationship with the viewer, but also with one another: "There's a scene in Michel Gondry's film The Science of Sleep where his protagonist talks about how dreams are prepared," Coy says. "They're a sort of nocturnal soup comprised of many disparate,accumulated things filtered through lived and imagined experience. I think the works [in Real Sex] function like that, in a way. It's a concoction of various forms dredged up from my middle-class childhood and then polished to a shiny uncanniness: cartoons, pizza, religion, desire, violence, fear, shame, anger, confusion, hunger, etc.

"They make this crazy mess that is real and gross and glorious. Which sounds a lot like sex."