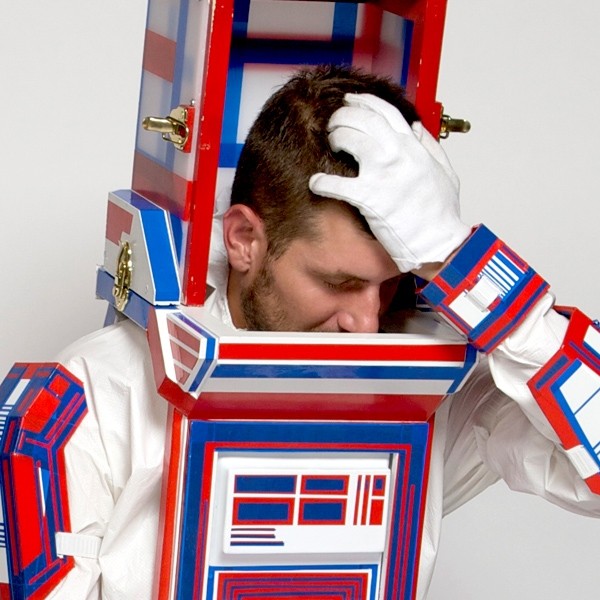 In literature and film, science fiction allows us to explore our earthbound endeavors through the prism of fantastical, imaginative ideas about technology. The opportunities it provides for symbolism and allegory have commonly been used to probe the boundaries of social issues, but less frequently has science fiction been used to explore the human psyche—to examine “inner space.” Christopher Kelly’s God Complex at the Utah Museum of Contemporary Art’s Projects Gallery (formerly Locals Only) uses the visual language of science fiction with a decidedly introspective agenda.

“Science fiction has its own language for facing hard political and social truths through a veil. I’ve turned that scope inward,” Kelly says.

The escapist aesthetic of science fiction is an opportunity to glance deeper inside one’s self, even if it’s through a somewhat distorted, futuristic lens. One metaphor of outer space is for the world of nature that humans have sought to control, an alternative arena in which humans could play out their god complex and establish society anew from a blank slate. But these oblique narrative gestures suggest that the effort might only serve to produce a tortured psyche.

In Kelly’s works, science fiction not only becomes as prone to existential dilemma as everyday life; it examines that dilemma in the extreme, since space is a representation of the ultimate distance from others.

The exhibit consists of performative sculptures and videos of Kelly performing in them. In one piece, the protective armor of a spacesuit also becomes a wall; as much as it protects, it also separates and isolates the wearer from others, becoming a vehicle of loneliness. At times, the character appears to be taking a break from the routine of science-fiction life: taking a drag from a cigarette, or contemplating existence with his head in his hand. The helmets he wears seem imprisoning, yet still serve as a means of establishing an identity, or a way to establish a limit of one’s “personal space.”

“Although much of his work strides the line of personal narrative, I think his use of science fiction allows his form of introspection to be accessible and relatable to a broader audience,” says UMOCA Curator Becca Maksym. “The intersection of technology and identity is something we can all relate to, and I appreciate how Kelly employs humor and playfulness to remedy—or at least ameliorate—the experience of isolation resulting from a shared dependency on virtual forms of existence.”

Kelly says his work “references and appropriates pop culture I’ve been exposed to throughout my life.” A good example is the film 2001: A Space Odyssey, which some of his works recall in ominous tone. The movie was largely about the darker, more solipsistic and sometimes sinister implications of space travel. In this alien(ated) realm, the traditional means of control over one’s surroundings are subverted.

Kelly says that he has always been fascinated by science fiction, and even though the genre is a mode of pop culture not often referenced by artists, appropriating it in his work “makes sense right now,” he says. “Science fiction has always been a part of my life, so I wasn’t surprised when my sculpture started to have a retro-futuristic tone. Exploring new materials and mediums evolved the work to where it’s at now.”

Kelly received a BFA in intermedia sculpture from the University of Utah, and his work has been featured at the 2012 and 2013 Utah Arts Festivals, Higher Ground Learning’s 2011 Disretrospective, group shows at the Broadview Entertainment Arts University, and the Salt Lake Arts Center. His previous work included installations resembling spaceships in large scale to geometric-shaped wooden jewelry in miniature. But his work in this show is his most ambitious, and largest in scale so far. Kelly is quoted in his artist’s statement as saying, “Everything that came before this was practice. Everything that comes after this is progress.”

While that sentiment sounds both dramatic and definitive, he clarifies that it’s not as cut and dried as that. “To me, there is no distinct moment, no crucial divide,” he says. “I could change my mind by morning. The ideas I had when I constructed my first helmet have evolved into something I never would have predicted up to this point, and it could all be bullshit tomorrow.” That sounds like the problem of science fiction itself, in which the “futuristic” horizon of reality is always shifting; the promise of technology to remake the world in a human image keeps running up against the twin limits of the world and the human.