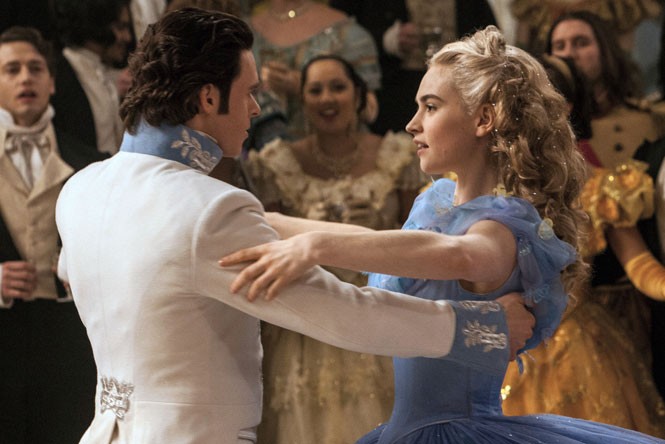 It's time for those of us who write about film to admit it: The war for Hollywood's soul is lost. It was lost a long time ago.

The war in question is the one against the brand-oriented emphasis of studio movie-making. We've griped for more than 20 years as sequels, remakes and franchise extensions proliferated, and all we've seen is a global industry more dependent than ever on familiar properties, familiar titles and familiar characters. When a live-action Cinderella emerges under the Disney banner, there's no point pounding our fists and asking why. We know it will never stop, any more than the Marvel superhero movies will stop before there are more "phases" than Super Bowls. This is the new normal.

In theory, it's not a terrible notion that director Kenneth Branagh's version would be an earnest, straightforward re-telling of Charles Perrault's fairy tale via the Disney animated classic. The screenplay by Chris Weitz goes heavier on the backstory, introducing the beloved mother (Hayley Atwell) of young Ella (Lily James) before Mom's untimely passing and Ella's merchant father's (Ben Chaplin) re-marrying, ultimately leaving poor Ella with a stepmother (Cate Blanchett) and two stepsisters (Holliday Grainger and Sophie McShera) who treat her poorly and give her that mocking nickname, as Cinderella story stepfamily characters are wont to do. It's a generally bright, cheery interpretation, built around plucky Cinderella's determination to follow her mother's deathbed advice to "have courage and be kind."

And, again, fidelity isn't inherently a problematic approach, simply because we're in an era where we're used to new versions of these classic stories, like 2014's Maleficent, which shift the perspective or add thornier psychological subtexts. The problem is that this version is faithful only to certain things, at the expense of the things that would have brought the whole enterprise to life. More specifically, this version is just about the humans: about Cinderella and her first meeting in the woods with a fellow who calls himself Kit (Richard Madden) but is in fact the crown prince; about Kit trying to convince his father, the king (Derek Jacobi), that he should be allowed to marry for love; about Cinderella and Kit's courtship at the ball; etc. It's almost entirely a nice, slow-build romance between two very nice people.

It is, therefore, almost entirely a huge bore. Those who remember Disney's animated Cinderella with any clarity will recall that the screen time actually devoted to the human characters is relatively small; the focus is on Cinderella's animal friends, like mice Jacques and Gus, trying to help her out, all while trying to avoid being caught by Lucifer, the cat belonging to Cinderella's stepmother. And when the focus is on the human characters, it's often accompanied by lovely songs like "A Dream Is a Wish Your Heart Makes," "So This Is Love" and "Bibbidi-Bobbidi-Boo." CGI versions of the mice get brief appearances here—not that anyone would be eager to see a more prominent role for CGI mice—and the songs are entirely absent. In short, somebody thought it was a good idea to re-create a version of Disney's Cinderella lacking absolutely everything that gave it its charm.

When Helena Bonham Carter shows up as Cinderella's fairy godmother, goofing her way through prosthetic teeth to do the obligatory pumpkin-into-carriage and fancy-ballgown thing, there's a brief glimpse of what's lacking during the rest of the film. Finally a spark emerges to distract from the inexorable march toward happily ever after, and from how eerily Lily James resembles a young Jessica Lange. Even Cate Blanchett can't help with that much-needed energy, despite a token effort to give the stepmother some emotional wounds to explain her cruelty (which nevertheless doesn't prevent Blanchett from going into full eyebrows-arched villainy mode).

And so we wait for the slipper to fit, so we can all smile at the nice people getting their nice ending. With Disney currently planning its live-action version of Beauty & the Beast, we'll have to hope that maybe, next time, the exploitation of intellectual property will wind up with something more than sappily ever after.