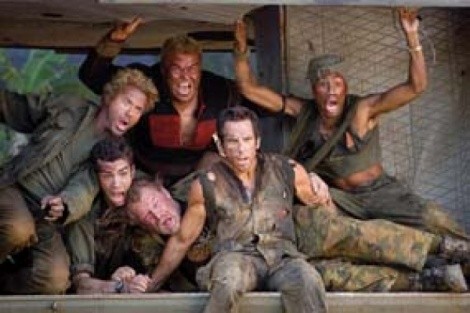 Ben Stiller is not a subtle guy. Not that there’s anything wrong with that.

On his short-lived, self-titled Fox comedy series in 1992, Stiller oversaw some terrific satire—including a brilliant sketch as a post-Soviet collapse Yakov Smirnoff, flop-sweating his way through a routine in which his “What a country!” jokes were suddenly dinosaurs—but the style was often broad. In the decade since he became a household name in There’s Something About Mary, Stiller has drifted primarily towards two comfortably generic personas: the tightly-wound, put-upon Everyman (see: Meet the Parents, Night at the Museum) and the preening buffoon (see: Zoolander, Starsky & Hutch). All the world loves a clown, and Stiller has been content to be one, nuance be damned.

Tropic Thunder, however, finds Stiller as star, co-writer and director attempting a skewering of Hollywood—a genre that requires a scalpel, where he favors blunt instruments. The set-up casts Stiller in buffoon mode as Tugg Speedman, an action-film star whose box-office clout is running out of steam and whose attempt at “serious actor” respectability—playing mentally challenged in Simple Jack—flopped miserably. He’s leading the ensemble in a Vietnam War drama titled Tropic Thunder, along with co-stars—including multi-Oscar winner Kirk Lazarus (Robert Downey Jr.), a Method maniac who had his pigment altered to play an African-American soldier, and heroin-addicted comedy actor Jeff Portnoy (Jack Black)—who are causing just as much trouble for rookie director Damien Cockburn (Steve Coogan). So Cockburn and the movie’s grizzled technical adviser (Nick Nolte) decide to drop the actors into the jungle for a more guerrilla-style filming technique—where they promptly encounter real danger in the form of a well-armed drug operation.

The opening 10 minutes hold out the promise of one of the year’s most hilarious comedies, including a trio of faux movie trailers introducing the preferred milieu for each of the three principal actors. “Lazarus” and Tobey Maguire make cow eyes at each other as closeted gay monks in Satan’s Abbey; “Portnoy” plays multiple flatulent, fat-suited characters in a vicious swipe at Eddie Murphy. Even the early moments of over-the-top violence from the movie-within-the-movie—a bayonet-slashed private (Jay Baruchel) tries to gather his intestines, and Speedman’s character goes down in a hail of Platoon-inspired gunfire—are funny in context. Give Stiller a full-length feature of cinematic parody sketches, and it’d kill.

But as soon as Tropic Thunder enters the “real world” behind the scenes of “Tropic Thunder,” things start to spiral out of control. Smirking criticism of “fart comedy” turns into something where “fart comedy” saves the day. Portnoy’s stash of drugs is swiped by a fly-by bat, and the actor begins freaking out with DTs. Speedman wanders off on his own and turns into a combination of Col. Kurtz and Sunset Boulevard’s Norma Desmond when he’s forced to perform a live version of Simple Jack as a prisoner of the drug lords. Tom Cruise—who apparently didn’t hold any grudges over Stiller’s goofy impersonations of him back in the day—puts on a bald cap and hairy forearms to play the hard-ass studio boss like an over-enthusiastic Saturday Night Live host. What begins as a jab at pampered celebrities soon becomes a collection of “bits,” giving everyone their look-at-me moments.

Meanwhile, performing in another movie entirely is Downey as the Australian actor who refuses to break character as a black 1960s grunt. The risky blackface stunt doesn’t go uncommented-on—another cast member, rapper-turned-actor Alpa Chino (Brandon T. Jackson), calls his co-star on the stereotypes he brings to the role—but Lazarus may be the one character here who’s actually a character, rather than a caricature. Somehow, while all around him are screaming to the cheap seats, Downey maintains a pinpoint control—never better than in a speech to Speedman lamenting Simple Jack’s error of going “full retard.”

Downey alone is good enough—along with the opening salvo—to save Tropic Thunder from real catastrophe. But by the end the whole thing has become kind of a mess: a joke at the expense of movie-industry bombast that falls victim itself to the idea that a louder gag must be a better gag, and that the image of a bald Tom Cruise shaking his booty is the ultimate punch line. Stiller isn’t ego-less enough to really let Hollywood have it, and he’s too much of a clown to get sophisticated about it. Tropic Thunder provides random goofiness without an identity, or much of a point.