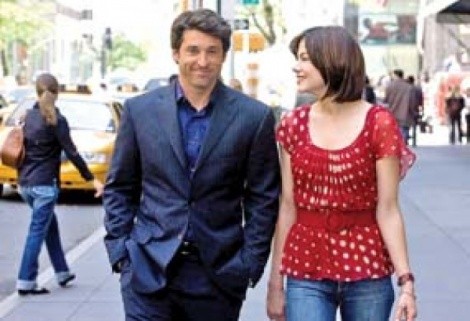 It must all seem like some wonderful McDream to Patrick Dempsey. Twenty years ago, he was playing the improbable pizza-delivering gigolo in Loverboy, and the guy who had to rent himself a hot babe in Can’t Buy Me Love. After two decades of plugging along in supporting roles, he abruptly finds himself anointed a hunky TV star on Grey’s Anatomy, ready for his cash-in as a big-screen leading man. Talk about your late bloomers; it’s as though Molly Ringwald suddenly woke up to discover she’s on the cover of People magazine’s “Sexiest Woman Alive” issue.

But something happened to Dempsey on the way to stardom: He got boring. The quirky energy of his youth evaporated, leaving a guy who’s more confident, but considerably less interesting. As he showed last year in Enchanted, he has become an amiable actor who looks great with his shirt off, but one without a whole lot of charisma—in other words, the urbanite equivalent of Matthew McConaughey.

That means, unfortunately, that it’s time to start plugging him into generic romantic comedies like Made of Honor. He plays Tom Bailey, a New Yorker who got rich by inventing that little brown “coffee collar” on Starbucks cups. This leaves him plenty of time to indulge in his favorite activities: sleeping with as many women as possible utterly commitment-free, and getting together with Hannah (Michelle Monaghan), the girl who dissed him in college 10 years ago and has been his best friend ever since. But when Hannah takes off on a long professional trip to Scotland, Tom realizes that he actually feels something more for her. And unfortunately, this revelation coincides with Hannah returning from her trip with a fiancé named Colin (Kevin McKidd), and a request that Tom serve as her “maid” of honor.

Yes, it’s a gender-reversed spin on the 1997 Julia Roberts rom-com My Best Friend’s Wedding, but that’s only one way in which this script—credited to Adam Sztykiel, Deborah Kaplan and Harry Elfont—blurs into its genre cousins. The meet-cute flashback immediately establishes Tom and Hannah’s attraction/repulsion tension; Rupert Gregson-Williams turns in the whimsically twinkly score; locations in Manhattan and Scotland pump up the fairy-tale charm. Tom gets a Greek chorus of demographically diverse guy pals off of whom to bounce his romantic dilemma, and Hannah in turn gets her own girlfriends. The story beats drift from montage to set piece to manufactured complication to reconciliation to denouement. You don’t come to this stuff for surprises, right?

You do come, in theory, for convincing chemistry. Monaghan holds up her end of the deal, continuing to impress as both an attractive screen presence and as an appealing actress. But Made of Honor takes a real chance by making Tom’s rival Colin not an obvious cad, but a seemingly perfect guy whose only apparent flaw is that he doesn’t like people eating off of his dessert plate. In order for the protagonists not to look like selfish jerks if they leave this guy jilted, Hannah and Tom need to click like magnets when they’re together—and they don’t.

And it’s Dempsey who’s to blame. In part, he’s the victim of the limp script, which first gives him an obvious psychological excuse for his male slut-hood in his oft-married father (Sydney Pollack, more spry and lively than Dempsey by half), and then has him undergo the entirety of his change of heart within the first half-hour, leaving the character nowhere to go. Yet he also brings virtually no spark to Made of Honor, whether he’s attempting pratfalls or juggling plates or loading up on maid-of-honor trivia. The entirety of his performance, as was the case in Enchanted, consists of a vaguely wounded expression and the occasional fit of pique.