Cinema | Citizen Plainview: There Will Be Blood tells a classic tale in a thoroughly new way 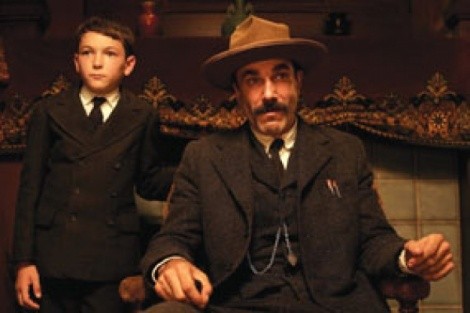 There’s a reason why it seems like we are seeing the same movies over and over again: We are. This is why when a movie like There Will Be Blood comes along, it is so deep-down thrilling in a way that’s both visceral and intellectual. It feels like it has re-invented cinema. It feels like nothing you’ve ever seen before. It feels, in a world so jaded by the sense that there is nothing new under the sun, like something new under the sun.

Which is weird, in its own way, because it’s very obvious that one must say, “Well, Blood has an old-fashioned kind of ambiance to it, one reminiscent of maybe Gone With the Wind, 1950s epics like Giant, and probably even Citizen Kane in many ways.” But There Will Be Blood slaps you in the face. It’s Joe Pesci in GoodFellas raging, “Do I amuse you? Do I entertain you?” Blood is not contemptuous of you; it just doesn’t care what you think about it. It is not there for you. It is there for itself. In the superbly philosophical vernacular of the moment that encompasses all the randomness of the world into a whaddaya-gonna-do shrug, it is what it is.

Writer-director Paul Thomas Anderson—who has made hard-to-like, easy-to-love movies from Boogie Nights to Punch-Drunk Love—starts out here with a painful pinch that makes you sit up and take notice. By the time he’s done with you (not that he even cares that you’re watching), he has bludgeoned you to death with his story—a simple story, really, but one that goes where it needs to because its characters are driving it. Anderson doesn’t care if you approve of what they do or of where their actions take them. Indeed, he has little control over them, because they’re strange and unknowable people.

This is all based on a portion of the novel Oil! by Upton Sinclair, and it is, of course, very much a fictional story that runs on the rules of fiction. Anderson simply makes you forget that. Blood is as effortless as it is resolutely not easy—perhaps the defining attributes of all great art—from the harsh dischord of its weirdly urgent soundtrack by Radiohead’s Jonny Greenwood, which does not attempt to disappear into the background, to the stilted yet deeply, coldly expressive performance by Daniel Day-Lewis. He stars as Daniel Plainview, turn-of-the-20th-century oilman, who comes into a small California desert town and takes it over to pump out the oil under its sands. The slow, subtle hypocrisies of Plainview’s life are the story, as greed pushes him to do ever more horrific things. The slow, subtle mood that Anderson sets with his long takes and unhurried edits lulls us into getting caught up in it all, in spite of how little the overall effort seems to court us at all.

It’s as if Anderson and Day-Lewis are reminding us that this is all a shadow play of fakery and making us forget that at the same time. It works perfectly well with the overarching story of Blood as a mythology of oil, a fairy tale for the industrial age, the story of human endeavor in the 20th century, really. Ambition and avarice drive out all other thought, with tragedy inextricably intertwined with the mucky crude; the divisiveness of modern life separates families and makes new families out of circumstance; the hardness of business clashes with the inflexibility of that other defining paradigm, religious faith and the controlling power of the preacher. Paul Dano (the silent teenage son in Little Miss Sunshine) is breathtaking as the man of the cloth who butts heads over decades with Plainview. Dano is potent and brusque and more than a match for Day-Lewis, underplaying what could have been a big, brash character and, ironically, making him all the more unforgettable the smaller and the quieter he gets.

This is one of those movies that may well vex casual moviegoers. It’s actively unpleasant in many ways, and not in any way that allows vindication at its end by vanquishing a bad guy and letting hope shine again. But that’s why we critics are praising it—not because we’re deliberately trying to be obscure, elitist, cool and superior, but because we see a lot more movies than you do, and we’re hungry for originality and daring. And we see that here, like we haven’t seen it in a long time.

THERE WILL BE BLOOD