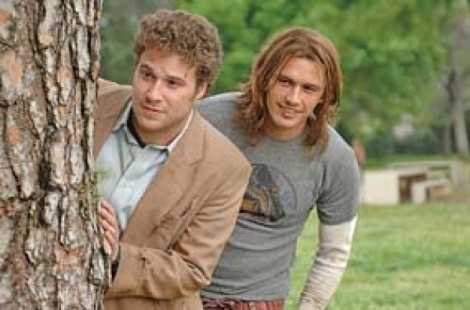 Like Ric Ocasek and Paulina Porizkova, the match just did not compute. Screenwriters Seth Rogen and Evan Goldberg were part of the Judd Apatow comedy stable, the guys behind the broader-than-the-Mississippi comedy of Superbad. Director David Gordon Green was best known—if only among a select group of Sundance sluts—for intimate character dramas like All the Real Girls and Snow Angels. What could Pineapple Express possibly do to meld these two sensibilities?

In hindsight, though, it was actually kind of an obvious pairing. From the opening credits, Superbad marked a throwback to the horny-teen comedies of the late 1970s and early ’80s. And Green’s 2004 drama Undertow—a gritty piece of Southern Gothic with its own stylized presentation of the film’s title—showed a filmmaker with his own hankering for down-and-dirty exploitation cinema. With its gratuitous dope-smoking and even more gratuitous violence, Pineapple Express would be a meeting of born-at-the-wrong-time minds over the joy of the low-budget aesthetic.

But something doesn’t quite congeal in the loosey-goosey vibe of this story about a pothead process server named Dale Denton (Rogen) who—while waiting to deliver a subpoena to crime boss Ted (Gary Cole)—witnesses the guy and a bought cop (Rosie Pérez) killing a rival. Dale flees the scene, but the roach he leaves behind—the specialized killer bud of the film’s title—leads Ted right to Dale and his jovial dealer Saul (James Franco). So they take it on the run, trying to outthink their murderous pursuers despite often being in an altered state that doesn’t exactly lend itself to prudent long-term planning.

The conceit of a couple of stoners with a real reason to be paranoid is pretty sweet, and at its best, Pineapple Express latches on to its protagonists misguided responses to well-founded fears. The most priceless segment finds Dale and Saul hiding out in the woods, their reactions swinging between Blair Witch-level panicked freakouts and spending an inordinate amount of time visiting with a caterpillar. These situations are paired with Rogen and Goldberg’s gift for truly demented bon mots—like Saul describing the aroma of his best product as “like God’s vagina”—and a delightfully goofy performance by Danny McBride as Saul’s supplier, Red. It ain’t Shakespeare, but it’s funny.

Like its protagonists, however, Pineapple Express also proves to have a painfully short attention span. The filmmakers aren’t content to make a buddy comedy paired with a stoner comedy; they’re also going to include as many fistfights, car chases, shootouts and Asian-gangster ninja assaults as they can squeeze into 110 minutes. Subplots linger without ever going anywhere, like Dale’s relationship with his 18-year-old girlfriend (Amber Heard) or Ted’s interpretation of Dale’s unpredictable behavior as evidence that he’s actually a trained assassin. And as off-the-wall funny as the sequence may be, it’s hard to justify the black-and-white prologue about 1930s military experiments testing marijuana on a suddenly rebellious soldier (Bill Hader).

It’s all served up by Green with a surplus of vintage effects—split-screens, freeze-frames, slow motion—but the result isn’t a movie that feels like an homage to 1970s exploitation cinema. With its combination of quotable dialogue and outrageous violence—as well as its pair of philosophically different, racially integrated killers for hire (Kevin Corrigan and Craig Robinson)—it actually feels like an homage to Pulp Fiction and Quentin Tarantino’s other homages to 1970s exploitation cinema. Green, Rogen and Goldberg were either not yet born or barely out of diapers when the movies they’re nodding to were made, so it feels like their reference point is actually Tarantino’s next-generation gloss on them. Pineapple Express becomes a photocopy of a photocopy, the point of the original growing blurry and indistinct.

Tarantino’s own spins on B-grade cinema work largely because of his precision; no matter how many discursive interludes he includes, his films are meticulously edited and emotionally taut. And the genre work from which he draws was itself often ruthlessly efficient. Pineapple Express is content to meander through its genre touchstones, settling down for a finale in a diner not because it’s where the story had to end, but because the filmmakers had run out of things they wanted to do onscreen. The shaggy fun they have with the 1970s begins to lose its appeal once it feels like the real match between Green and his screenwriters is guys whose affection for their subject is purely theoretical.