There’s a bar stool AND a dance floor with your name on it.

Whether you need a cold beer, stiff martini, a date, live music, DJs or just someone to take home, Salt Lake City’s nightlife has it all. In 2008, you’ll find that taverns and private clubs remain smoker-friendly. Light up while you can (a ban takes effect in 2009).

Looking for your music scene or genre? City Weekly has it broken down for you online. In the meantime, check out these clubs and find your peeps:

5 Monkeys
If you were a regular of the other clubs that occupied 5 Monkeys’ space over the past 20 years, you probably won’t recognize the joint. We’re hard-pressed to recall a more radical makeover of a former dive than this; every inch of the new 5 Monkeys seems to have been scrubbed, repainted and swankified, with live music or DJs kicking most nights of the week. If you’re young and ready to party in Murray, this is the place. 7 E. 4800 South, 266-1885

Bar Deluxe
Bar Deluxe popped on the scene in 2007, reclaiming the space formerly ruled by one too many College Nights and one seriously weak address. Owners/tattoo artists/old-school burlesque enthusiasts installed a raised stage, a few bare-bones booths and a whole lot of attitude to a stretch of downtown that’s this close to being a bonafide “strip.” If you’re looking for cool cats, killer music and the occasional (legal) strip-tease, this club’s for you. 666 S. State, 521-5255

Bar in Sugarhouse
This cash-only bar is one of the last Sugar House landmarks left standing after the colorful district was sold to new developers. Its unassuming (read: shack) digs are a comforting reminder of the good old days. Buy your neighbor a beer and drink to another era. 2168 Highland Dr., 485-1232

The Bayou
Life gets elevated at this spacious “beervana,” where revelers can upgrade standard 3.2 fare with high-octane domestic and imported alcohol. With 204 bottled beers in stock, 31 on tap, plus an extensive wine and spirits list, it’s no wonder the joint is packed on weekends. Enjoy live jazz and blues while you wait—and wait—for a table. 645 S. State, 961-8400

Bliss Nightlife
One of few private clubs in Utah offering VIP service for guests willing to up the ante for a night on the town. Perks include valet parking and a private upper bar. Bliss regulars come for the swank atmosphere, dance parties and weekly Ultimate Combat fighting. This is the place to try out that little black dress. 404 W. South Temple, 363-3734

Brewvies
Why pay full price when you can catch an also-ran comedy, drama, horror film or the occasional music documentary for a cool $4 at this laid-back bar/cinema. Drink at the bar or bring pitchers/pints into the theater to wash down delicious, greasy pub fare. Top it off with a post-show game of pool. 677 S. 200 West, 355-5500 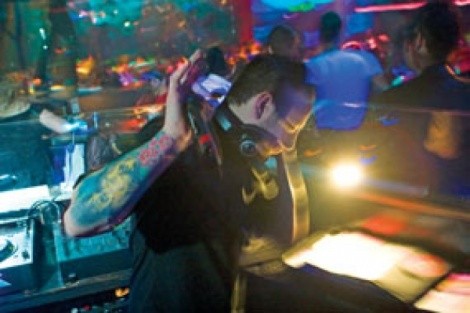 Burt’s Tiki Lounge
This memorabilia-strewn dive-bar holds a special place in its heart for freaks, geeks and balls-to-the-walls rockers who come for ear-splitting performances by touring acts and local rockers including Thunderfist and Ween tribute band Spleen. Check out one of many drink specials, then head upstairs for arcade games and pool. 726 S. State, 521-0572

The Cell Block
Somewhere between a sports bar and a rock bar, but not a “prison” bar, the party-hearty Cell Block on 3300 South mixes it up with DJs, karaoke, Texas Hold ‘Em, live bands up front, pool tables in the back and the occasional bartender lighting stuff on fire. Yes, fire. 1037 E. 3300 South, 463-1138

Cheers to You
Unrelated to anything Ted Danson, this bar has such a diverse crowd that you may very well find a mailman, a psychiatrist or a naïve, young Southerner. Booths are a tad small—great for getting to know your date but not so great for meeting up with the Lacrosse team. 315 S. Main, 575-6400

Circle Lounge
Don’t be fooled by the blank, industrial exterior, this joint is swank. The beautiful people meet here to nosh on sushi, sip martinis and enjoy live jazz from a circular stage draped in sheer curtains. Dress code encouraged, if not enforced. 328 S. State, 531-5400

Cisero's
Park City may have more than a 100-year history, but really, Park City is a new city. Leading the way in a roomful of rustic charm, however, and considered an old-timer by Park City’s evolving standards, Cisero’s reigns as Main Street’s go-to hotspot for live music and fine Italian fare—the perfect blend of locals and tourists. 306 Main St., Park City, 435-649-5044

Club 90
Looking for the heart of Saturday night on the mean streets of Sandy? Then Club 90 is for you. Two different bars, a banquet room and waitresses who call you “hun” complete this massive club’s appeal. Great live bands every weekend. 9065 S. 150 West, Sandy, 566-3254

Club Vegas
All metal … most of the time. Industrial, goth and straight-up rock bands appear onstage, but this dimly lit west-side club is first and foremost a headbanger’s heaven. Shout at the devil from the sideline booths or at one of two well-stocked bars. 445 S. 400 West, 364-8347

Good Spirits
Judging by the miscellaneous bras dangling from the rafters, this veteran club has seen some wild and crazy times. Of course, stop in on a week night and you’ll find customers taking in a mellow evening of good conversation and whatever’s on tap. Fill up on more than fried fare with savory enchiladas or hearty burgers, then hustle yourself a cab ride home at one of several pool tables. 999 W. 3300 South, 263-0411

Duces Wild
Take a walk on the wild side and relax at this Salt Lake gentlemen’s club. Stop in for daily lunch specials and a game of pool. Come back when the sun goes down for late-night entertainment. 2750 S. 300 West, 467-4600