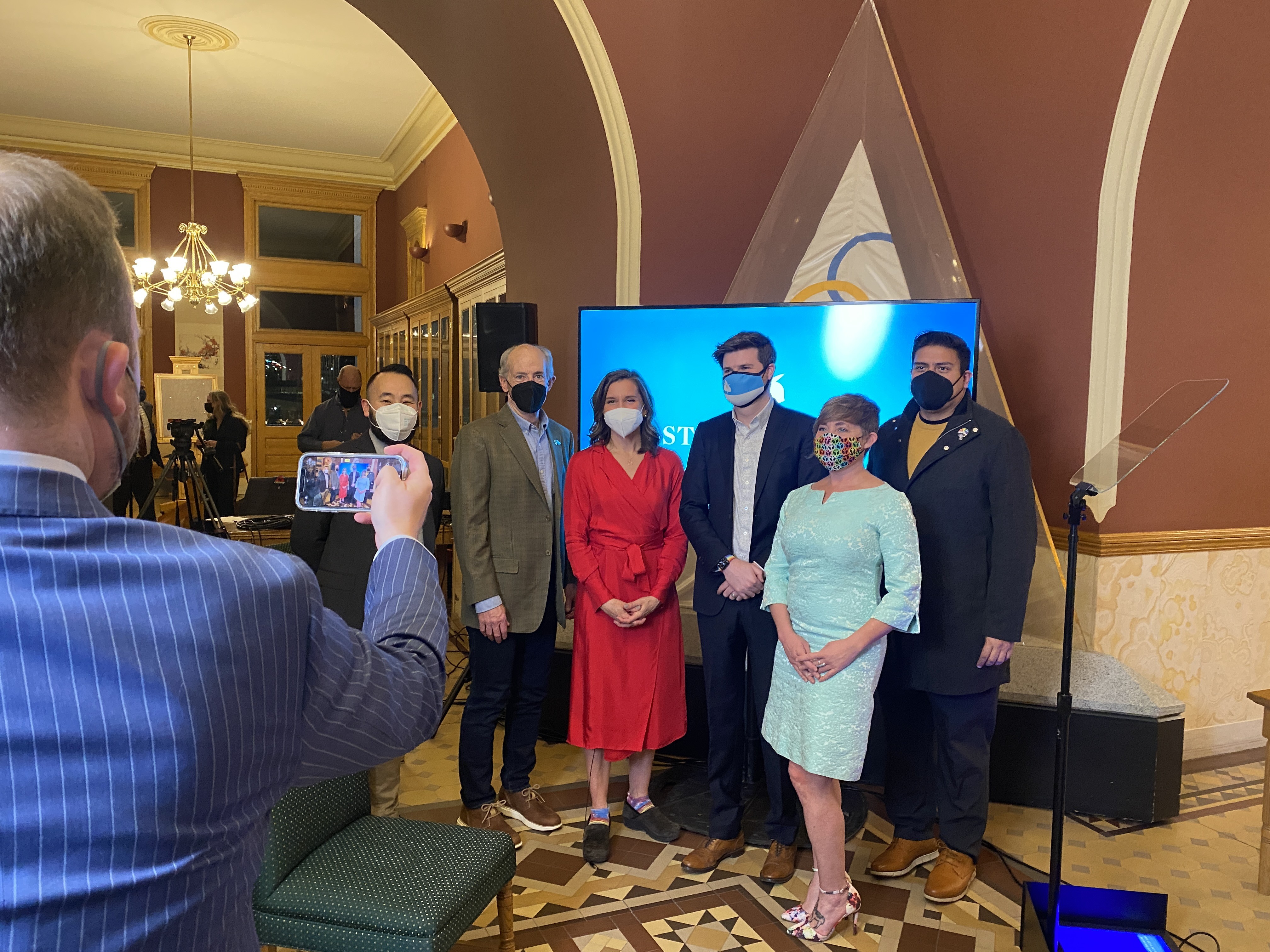 DOWNTOWN—During a crisis, important goals are often set aside for the most urgent, Salt Lake City Mayor Erin Mendenhall said Tuesday. But the city’s focus has not waned through “dark days and uncertain times,” she said, allowing for progress on crime rates, air quality and social equity in the midst of a global pandemic.

“We have not been distracted—not for one minute,” Mendenhall said. “Our city is resilient. Our city is strong. And I stand here deeply proud to serve as its mayor.”

Mendenhall’s comments, delivered at the City & County Building to a mostly virtual audience, were made during her annual state of the city address. It described a community blooming under pressure from multiple fronts and an administration that values everything from increasing the number of police on the streets to increasing the number of trees on the west side.

“It’s easy to underestimate the impact these trees can have,” she said. “It may look like simple beautification to some, but the 2,000 trees we have planted will grow to generate half-a-million pounds of new oxygen and take 20,000 pounds of pollution out of the air each year. And they’ll do it in the neighborhoods that need it the most.”

The mayor's address focused heavily on air quality, the issue that Mendenhall credits with ushering her into a political career. She said it will take decades to recover from the environmental damage that took decades to inflict, but that new investments in solar power, pollution monitoring and a energy collaboration with Rocky Mountain Power and other local governments are in keeping with moving the city to green power by 2030.

"These are the kind of steps I dreamed of as an air-quality advocate," she said. "Our city is taking unprecedented control of its energy future."

The city is also working to expand access to public transit, Mendenhall said, and to make navigating the city without a personal vehicle safer and more convenient. Her address came hours after the announcement that all Utah Transit Authority fares would be free during the month of February, which in turn will inform ongoing efforts to decrease—or eliminate—the charge for transit services.

"If we want better air quality," Mendenhall said, "the best thing we can do is take public transit or, if you can, switch to a clean, electric vehicle."

But Mendenhall’s address was almost as much about state government as it was her city administration. She made frequent mention of the Utah Legislature, criticizing its habit of micro-managing and retaliating against cities (and Salt Lake City in particular). State law prohibits municipalities from adopting rent control policies or setting a minimum wage, she said, and other efforts to address the cost of living could lead to more punitive legislation from lawmakers.

“We can’t give up,” she said. “Instead, it is our leaders’ responsibility to be creative, to look for ways to lower the costs of living without running afoul of current state law and, ideally, without inviting new state laws that punish every city because we dared to try.”

Mendenhall also aimed her comments on homelessness at the Legislature, saying that Salt Lakers are generous and compassionate to their unsheltered neighbors. But, she added, the city’s generosity cannot be “taken advantage of” as it is today.

"Salt Lake City residents have footed too much of the bill for addressing a statewide humanitarian crisis," she said. "The current imbalance is simply not sustainable for Salt Lake City taxpayers."

Mendenhall called on neighboring cities to do their part in providing shelter and services, and called on Utahns generally to contact their representatives on Capitol Hill and push for larger statewide investment in homelessness and housing.

“Salt Lake City’s values will not change,” she said. “Our compassion will not be diminished. We will continue to bring our grit, our grace and our resilience to the state’s homelessness crisis. These are our neighbors and they need our help.”

On the Coronavirus pandemic, Mendenhall described Salt Lake City as having stepped up “when the state stepped back.” Last year, Mendenhall ordered the wearing of masks in clear defiance of the Legislature, which had enacted laws limiting that power to county legislative bodies (and soon after revoking those county orders once they were duly issued).

The pandemic demands boldness, Mendenhall said, but government must now treat COVID as a chronic condition instead of an acute crisis. The “bitter reality,” she said, is that a sudden, miraculous end to the pandemic is not coming.

“We will continue to do what we can and what our health experts advise—within the parameters state law allows,” she said, “but we also have to acknowledge that personal responsibility is the most powerful tool remaining in our arsenal.”

Mendenhall reported that the city ended 2021 with an overall decrease in crime compared to annual averages. The issue of public safety has dogged the administration for months, with escalating crime rates in the beginning of 2021, staffing shortages that exacerbated delays in response times and a series of highly-visible violent and sexual crimes generating controversy among residents and business owners.

Salt Lake City is no longer a small town, Mendenhall said, but no amount of criminal activity is acceptable as her administration strives to lead the state in public safety.

“I’m proud of the progress we’re making,” Mendenhall said. “I’m proud of our officers who show up every day to keep our city safe and I’m proud of the direction we’re going—the community-based approach we’re taking—as we make the city safer for everyone.”

"Masked, unmasked, vaccinated, unvaccinated, housed and house-less, activist and elected—we are all Salt Lakers," she said.

Members of the Salt Lake City Council, as well as Police Chief Mike Brown, were present a the City and County Building for the address. In a prepared statement, Brown thanked the mayor for her leadership.

"The SLCPD is committed to serving and helping our communities grow stronger and healthier," Brown said. "We strive every day to provide victim-centered and trauma-centered services."

"The City Council and the mayor work well together," Dugan said. "I think we're on the same page on most things."

But Dugan also echoed some of Mendenhall's frustrations toward the heavy hand of the state Legislature, which is currently meeting in its annual, 45-day legislative session.

"The state always touches on local control from the feds, but then they decide they want to take it away from cities," he said. "That's disappointing."