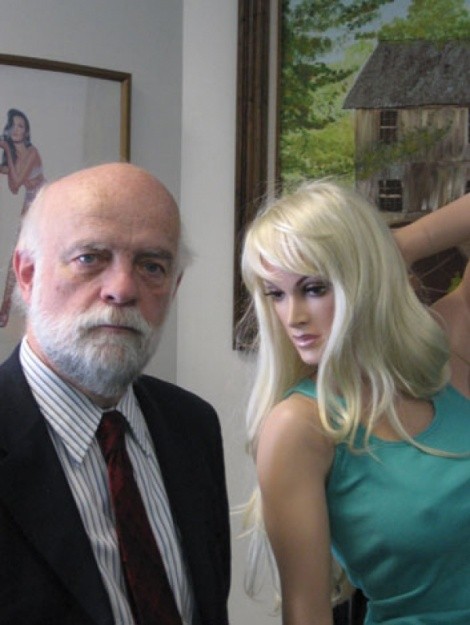 Taking the wrong turn looking for the bathroom at the Midvale Dr. John’s Lingerie Boutique, one comes upon a few desks and a leftover lingerie mannequin in one corner of a sparsely furnished office, where a man in jeans and denim shirt sits behind another desk overflowing with papers. But he’s not the owner or manager of the adult novelty store—he’s Andrew McCullough, civil-rights attorney and candidate for the Libertarian Party, running for governor in 2010.

McCullough has run for attorney general as a Libertarian four times but says he hasn’t formulated precise policies on every subject a gubernatorial candidate should, from classroom sizes to road-construction plans. Still, he says, he could keep himself busy if elected.

“I can just see myself after the Legislature has adjourned with my veto pen,” McCullough says. “That would be a very enjoyable experience.”

Getting elected may be a fantasy, but he campaigns hard to build up the Libertarian Party in Utah. With strong anti-federal government sentiments resonating on the conservative side of the spectrum and more cities and counties granting employment and housing rights for gay and transgender Utahns, McCullough sees plenty of potential Libertarian converts—and he’s just the man for the mission.

He’s made a reputation for himself in the legal community as a patron saint of sexually oriented businesses—representing exotic dancers, prostitutes, johns, and adult stores like the Dr. John’s, where he rents office space. But McCullough wasn’t always a Libertarian, though he was likely always a contrarian.

Growing up in Albany, N.Y., McCullough was a staunch Republican in a Democratic state. His major act of youthful rebellion was to leave the East Coast and attend law school at Brigham Young University in the early ’70s.

His parents, he says, were “bungling bureaucrats,” who worked for New York state government. “My father paid people not to work—which mean’s he worked for the department of unemployment insurance. My mother worked in the tax department, and for a Libertarian, that is the biggest sin.”

As a former member of The Church of Jesus Christ of Latter-day Saints and as an advocate for the vice crowd, McCullough is comfortable saying he defends civil liberties—and not because he personally enjoys the same habits as some of his clients. “I drink iced tea,” he says. “That is my vice. I’ve never had a cup of coffee, I certainly do not drink alcoholic beverages, and I do not smoke marijuana.”

While the rights McCullough defends in practice may not be exercised personally, he has often approached new opportunities in life based on how they’ve affected him. He once approached the American Civil Liberties Union of Utah about getting help on a First Amendment issue related to sexually oriented business. The ACLU board denied the request, and McCullough told the director they should have had at least one board member who would have said yes. By the next month’s board meeting, McCullough was a member, and roughly 20 years later, he’s the senior-most board member.

But the story of how McCullough first got into politics is most crucial to why he continues to fight for civil liberties. One evening, McCullough’s friend, a stripper, had been pulled over by the police. Because she suffered from a slight form of cerebral palsy that caused her to talk slowly in normal conversation, the cop believed she was on drugs and searched her car.

“They didn’t find something, so they started searching body cavities,” McCullough says, his voice breaking. “We filed a lawsuit against the state for unlawful search and seizure, and Attorney General [Jan Graham] fought us tooth and nail.” During the middle of the proceedings, McCullough received a campaign flyer from Graham asking for donations. McCullough called to tell her that not only would he not donate but he would run against her.

He ran and he lost. But that hasn’t stopped him from fighting the government in the courtroom and on the ballot.