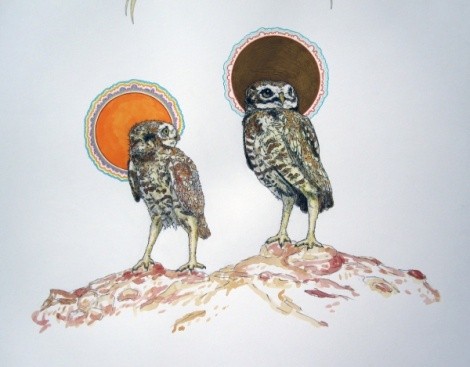 Animals, wild and domesticated, are frequently depicted in fine art. They are anthropomorphized and they are portrayed as symbolic children, symbols of danger and brute force or archetypes of the natural world in general. Yet, there’s always a barrier between our world and theirs, a block to our understanding of them, in spite of our co-existence with them on the earth.

Local artist Claire Taylor seeks to arrive at an understanding of the world of animals through her drawings and printmaking. Animals achieve connections with one another but also with the viewer through symbolism; it’s an attempt to use art to feel closer to nature. Her new collection at Art Access Gallery displays reveals that awareness.

“I have always felt a strong connection to animals. Up until recently, I used to enjoy spending time with my friends’ pets almost more than my friends themselves,” she says. “I find animals to be beautiful both physically and psychologically.”

She describes her depiction of animals as “otherworldly and magical,” and adds, “these animals’ sense of self, and their relationship to the physical and spiritual world and others in it, takes a pure, concentrated form.” Her view of animals is an idealized one, but it’s also a compelling one—aesthetically as well as emotionally—and something the viewer can respond to, because it’s formed from her own experiences with animals.

The wild dog, California condor and owl felt particularly significant to her because she spotted them all in the wild in summer 2010. “These three animals stem from a group of seven human and animal portraits I made comprising my ‘wolf pack,’ which showed at Copper Palate [Press] in October 2010,” she explains. “All of these sightings captivated me and left an impression, the owls in particular.”

The experience that made the deepest impression, she says, happened during a nighttime run in the Avenues. “I passed a stop sign, and right afterward, I heard a ‘bong!’” she recalls. “I turned around and a small owl had landed on the stop sign after I had passed it. I stood there staring at the owl, and the owl at me. After a few moments, another owl swooped down, touched the grass between me and the sign and flew up into a tree.” She stood staring at the first owl, but then ended her run early, as things felt too intense.

In the space of several weeks, she saw more owls. “All of these sightings, and also the times I saw the fox and condor, I was captivated by the presence these animals possessed,” she says. “They felt like strong, spiritual creatures, in this world for a purpose. The connection I felt to these animals is significant to me, and I feel it relates to who I am as an individual right now.”

This new series, Feather of the Dog, Hair of the Owl, explores the connection between different species on a deeper level than she has explored before. “The patterns I depict represent both a common spiritual connection amongst a group of individuals, and also the energy that the individual puts out into the world,” she relates. “I think animals, because of their purity, would have a more intense sense of the place around them and others therein. I think their sense of reality would be vastly different from our own.”

It’s a challenge to capture not just the essence but the reality of the world for other creatures—their experience of living in the world and the way they relate to each other. Her artistic style is realistic, but with surreal and mystical touches, like auras around the heads of owls and dotted lines emanating from owl to wolf as though they were projecting energy fields. This is slightly reminiscent of American Indian art, but also modernist minimalism.

With a degree in printmaking from the University of Utah, she works in the book arts department of the Marriott Library on campus, and she uses the program’s presses and other equipment to make letterpress prints. Her work, overall, has a look that’s very clean compositionally, as well as a clarity of line that shows the influence of book illustration.

“I still love printmaking, but I’d like to explore drawing and painting more,” she says of her work’s future direction. “I’ve also come to embrace my humanness more recently—I used to have a secret wish that I was an animal. So, humans make more appearances in my work. But most likely, I will go in whatever direction my fancy takes me at the moment.”

Taylor’s work is shown alongside the animal sculptures of Tim Little, who fashions his pieces from recycled metal parts from cars, cameras, bicycles and even dead tree stumps.