After a separation, the members of Moodlite found their way back to playing together. 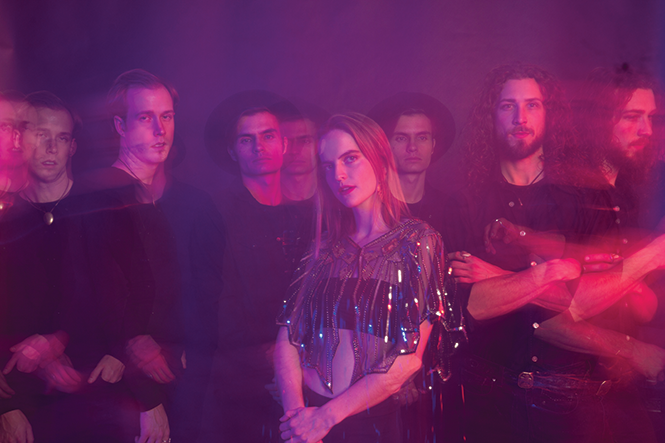 Have you ever experienced one of those movie-like moments where you're about to leave a place or a person and realize you really don't want to? Katya Schweiner certainly has.

For the vocalist of the roughly 1 year-old local band Moodlite, that moment came on an airplane departing Salt Lake City, after concluding one of many visits to her college friends, Tor Carlson and Evan Fleming. They'd spent their time together huddled in Flemings' bedroom recording songs on the fly, fevered with a shared flash of inspiration and the chemistry of their long friendship.

"I remember writing in my journal like, 'What is going on? I feel like I should maybe come back,'" Schweiner recalls of that moment on the flight back to California, where she was living and working in her field of behavioral therapy. "They hypothetically were like, 'You should come, let's do this, let's be a band.' And I laughed it off, but at that point I was really like, 'It's now or never.'"

And it was. At the time, she was about to start a master's program through her company. When she got back to California, Schweiner sat down with her boss and declared, "I love what I'm doing right now, and I think I'm going to Salt Lake City and joining a band."

From there, she spent a few months in California preparing for the move and writing music on her own. "I'm about to become a musician, I think," she remembers marveling. Once finally in SLC, she, Fleming and Carlson all shacked up together in a home that would also serve as their studio, recruiting not too long after their friend and neighbor Sean Eckel, a bassist with roots in Texas rock bands.

The seamlessness of their coming together almost seems to reflect the music they've been playing around the state and at out-of-state festivals for the last year—cohesive, complex and strong with a base of neo-soul and electronica. After learning about music production and technology together at Willamette College in Salem, Ore., Schweiner, Fleming and Carlson kept coming back to one another despite living in different states for a couple years after graduating.

They didn't start out on the same page, though. Until her first visit to the electronic-focused music festival Lightning in a Bottle, Shweiner gravitated more toward acoustic music in the folk and singer-songwriter realms, identifying with strong female lead singers. "Experiencing it in person and being able to dance to it and see live instruments with synthesizers ... really struck me," she says. Carlson's background, meanwhile, is in classical piano and rhythm guitar, while Eckel's rock roots initially made him scratch his head at the production side of things.

Lightning in a Bottle changed Eckel's mind, though, because Moodlite eventually played the fest. Fleming, too, has helped to expand the group's musical leanings, always finding "weird, funky electronic stuff that he funnels into everybody's lives, really casually," Schweiner says.

The group seems to have found themselves quickly, but getting their work out into the world has been more of a challenge. While playing their hearts out at shows, they've felt compelled to honor their older songs, even as they ache to move on to new songwriting ventures. "We're trying now to just push things out so that we can write again, because that is calling us all so much," Schweiner says.

All that pushing—at their home studio and with time at Audio Inn that they won in the South Jordan Battle of the Bands in 2019—has granted some progress. They've released songs here and there throughout 2019, including the sultry "Void," with tracks "Jaded," "Monster" and "Bite Down" on the way. An album eventually is on the horizon. Attracted by some deep magnet forces, it makes sense that they're now digging in to perfect the good that drew Schweiner back to her friends.

Speaking of the band's desire to work on new material, Schweiner says, "It's hard when you're not in it anymore. When it feels old, it doesn't feel as genuine anymore." But it's fitting that one of the old songs they've been working to record, "Bite Down," seems to be a valuable touchstone of patience, for Schweiner at least. She says that the song speaks to "biting down harder" when faced with obstacles and stress.

"Sometimes it's just so all-consuming, and it's one of those things that takes some time to feel the rewards," she says about recording music with such high production values and depth to its layers. "Shows are this sort of immediate gratification, of people listening and feeling the music and coming to you afterwards and being like 'that made me so happy,' because that's all I want."

The best way to hear Moodlite is still live—not just because their music isn't all online yet, but because of the special, groovy vibes they access and deliver with ease that sound so vibrant in person. Find them at a fundraiser for Open Classroom on Feb. 22, and later headlining Soundwell's new Hive Live Showcase on March 11.