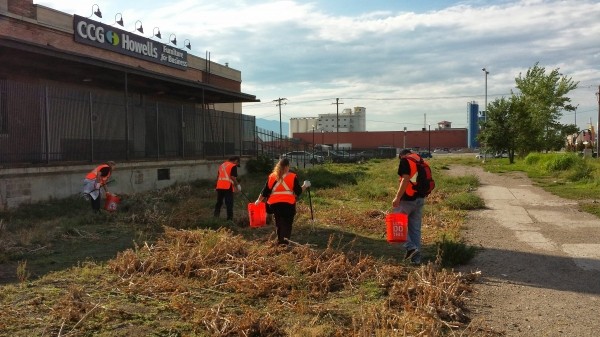 Life on the streets for Salt Lake City’s homeless is not easy, nor is it pretty, given the way drugs, despair and trash tend to pile up around the sidewalks near The Road Home homeless shelter on 210 S. Rio Grande St. It’s a scene that most motorists drive past quickly, windows rolled up and doors locked. Except recently, when a car slowed to a stop and a woman rolled her window down to tell a shelter resident “Thank you, you guys are doing a great job!”

It was an unusual exchange, but one that’s becoming more common as city residents recognize members of the Salt Lake City Clean Streets Team for their work beautifying a neglected part of town. The team is comprised of homeless residents and those living in supportive housing who’ve been selected to do part-time work cleaning up garbage, shoveling walks and taking care of the neighborhood around the shelter and Pioneer Park at 300 South and 300 West—even cleaning up in front of businesses that ask for assistance. The program has been up and running since September 2013, giving some of the city’s most vulnerable an opportunity to better themselves and their city at the same time.

The program is a collaboration between partners like the Downtown Alliance, Salt Lake City, Valley Services and other organizations. For Camille Winnie of the Downtown Alliance, the program’s goals of helping clients are simple: “Get a résumé, get some work experience, get a positive reference and also make some introduction to other things that they wouldn’t have on their own,” she says. “It’s kind of like that midway step. It’s transitional in that we want them to use that as a stepping stone.”

It’s a program that was scoffed at by at least one city council member a few years ago. But now, thanks to city funding and support from partners like GE Capital, CitiBank and the Utah Transit Authority, 12 individuals have transitioned from unemployment and life on the margins to full-time employment.
The program is overseen by Valley Services, which employs the team members, and at any given time has 16 minimum-wage employees working in three-hour shifts cleaning up the streets. Rob Ferris of Valley Services, who coordinates the street team’s work, says the effect on the neighborhood is clearly noticeable and the effect on the employees themselves is tremendous.

“They’re no longer homeless or drug addicts or ex-drug addicts. They are working, they have a sense of pride, a sense of confidence in what they’re doing,” even as they work among other homeless still clinging to the drug and crime ridden streets, he says. “While they’re out working, they feel like, ‘This is not me anymore.’ They are able to focus on what’s important.”

City Weekly spoke with a number of street team members, who asked to have their last names withheld, about their experiences. Caroll has been part of the program since it began, and was lucky to have the work after her struggles with methamphetamine cost her the full-time job she had working at the airport. Now she cleans up around the shelter, and even when faced with the sight of rampant drug use, her resolve to stay clean isn’t tested by what she sees—rather, it’s strengthened.

“It helps me to see how bad they’ve gotten,” Caroll says. “I realize what could have happened to me if I hadn’t got help at the time.”

Clean Team member Beth wound up living at the downtown shelter after losing a good-paying job she’d held for more than eight years at a four-star Park City hotel in the hospitality industry. “When the economy tanked, they just laid people off right and left,” Beth says. Now in her 60s, Beth is using the job to support herself while she retrains to do administrative work as a receptionist. She’s taken all the free Microsoft Office classes at the Salt Lake City Main Library that she can. But even without a criminal background, she says she struggles with age discrimination.

David, who was recently promoted on the street team to become a team leader, used to work under-the-table construction jobs for friends remodeling homes. After the economic crash, the work dried up, and because he had been operating under the table, he didn’t have references that he could list on an application. He gets by now on his work with the street team, though he says that since he sleeps every night on the hard ground in his tent, it’s been tough getting used to waking up in the morning on time to start his shifts.

Before getting a shot with Valley Services, Cary wrestled with a crack addiction; he’d gotten caught up in the drug while working as DJ in the downtown nightclub scene for more than a decade. Like many who have a substance-abuse problem, Cary’s life followed a seemingly inevitable trajectory.

“During the time I was homeless, I was on the street, selling drugs, doing drugs and my diabetes got way out of whack,” he says. “Got arrested and spent some time in jail.” While checking in with the Fourth Street Clinic to get help with his diabetes, he eventually got put on a list and got into the supportive housing at Palmer Court. He then got a part-time job with Valley Services that, day by day, allowed him to gain more and more responsibility. He’s gone from working a few hours a day to, now, working full-time with benefits under Ferris as the site supervisor for Valley Service’s contracts, including with the Street Team, and also working at another part-time cleaning job.

The work, he says, “gives you a sense of pride and self worth.”

It’s a feeling that team members say is something that spreads out beyond even them. Beth says that since she’s been cleaning up around the shelter, the homeless who might have formerly tossed bottles or wrappers on the ground now throw them in the garbage, helping out the Clean Team.

“People who live there recognize the problem; they’re trying to help,” Beth says. “We see people say, ‘Oh wait let me pick this up and help you.’”