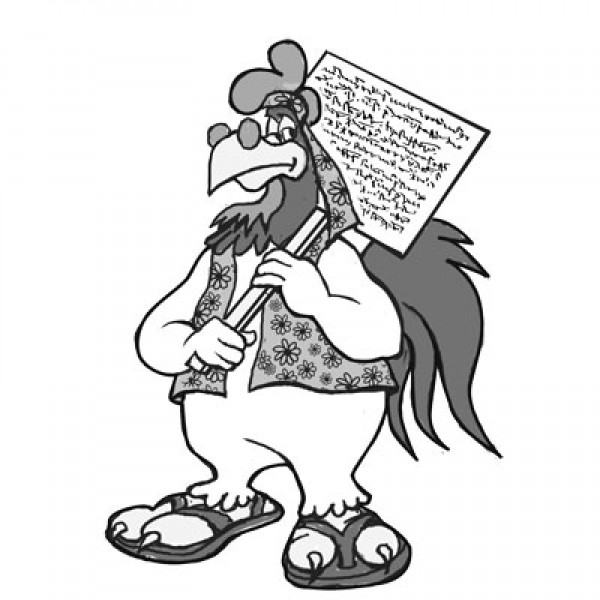 Almost overlooked at the Chick-fil-A Appreciation Day last week was a small but vocal contingent of chickens. I was standing on the north side of South Temple, waiting for the light to change, when I heard a persistent clucking sound. At first, I thought it might be a new auditory signal alerting pedestrians that they could proceed safely across the street. After all, the official chirping sound is by now so familiar that many pedestrians don’t even hear it, engrossed as the vast majority are in texting or playing Words With Friends.

But the clucking persisted, and I was quickly able to locate the distinctive sound. Not two feet away from me was a group of 11 or 12 chickens, most of them carrying signs that were totally illegible.

One of the chickens was clearly in charge, a dignified bird that bore a passing resemblance to the late Foghorn J. Leghorn, who, you remember, after a distinguished career on the silver screen, was forced to eke out a living doing commercials for Kentucky Fried Chicken. Leghorn died in disgrace, universally condemned by his fellow chickens for selling out.

I remember a poignant interview with Leghorn in which he argued that tuna fish didn’t get on Charlie Tuna’s back for being a spokesfish for StarKist. “I say, I say, Charlie wanted to get caught, chopped up and put in a damned can,” Leghorn pointed out. “Whereas I wasn’t offering myself as a lip-smacking-good drumstick, and I never said chickens actually liked ending up as a nine-piece meal, original or extra crispy.”

The Foghorn Leghorn look-alike on South Temple was doing his best to round up his fellow chickens. Noticing that I was the only human being in the vicinity paying them any mind, the chicken in charge looked up and shook his impressive head.

“Look at them,” he said, waving a wing, “running around like their heads have been chopped off. It’s hard to get them to focus. A lot more of us chickens had signed up for this Chick-fil-A demonstration, but then, when we were getting ready to get on the bus, most of them chickened out. Story of my life.”

“So,” I asked, “I gather you are on your way to the City Creek food court to protest the fact that Chick-fil-A slaughters millions of innocent chickens?”

“That’s a lost cause, I’m afraid. Most of my fellow chickens don’t have a clue about what awaits them. They spend their lives getting fattened up with growth hormones and then, before you know it, adios! At least in the old days, we could count on a few good years before ending up being paired with a nice Chardonnay. Now, we barely have a chance to see the sky.” “But I noticed your signs. You’re not here to protest Chick-fil-A?”

My friend Foghorn glanced sadly at the scribbled signs.

“I knew those signs were a mistake. No matter how much we stress penmanship, everything we write looks like chicken scratches. At least you picked up on the fact that we are protesters rather than chickens who have gotten lost in the big city.”

It was a long light, with the orange no-walk signal still blinking away.

“So, if I might ask, what exactly are you protesting?”

“I’ll tell you what it is. It’s this idiot Dan Cathy, you know, the top bird at Chick-fil-A, coming out with his gratuitous anti-gay remarks, saying that he believes in the biblical definition of family, whatever that is. Last time I checked, all the patriarchs in the Bible had dysfunctional families and multiple wives, not that the two go together.

“For instance, one of the most famous chickens of all time, Chanticleer, had at least seven wives. But my point is that a family is as a family does, and gay parents do a pretty damned good job, as far as I can tell.”

Foghorn gestured toward the sign-wielding chickens.

“I wish you could read the signs, because they were up all night making them. That one there says, GAY CHICKENS TASTE LIKE CHICKEN. And over there, EATING A GAY CHICKEN DOESN’T MAKE YOU GAY. One of the chickens had a sign that said, YOU ARE WHAT YOU EAT, but I vetoed that one.”

The light was taking forever, but finally the numbers ticked down and familiar chirps signaled that we could cross the street. Foghorn gave a big sigh.

“Now if I can just get these chickens to the other side.”